A museum in one's life

I’ve known the Garden Museum since, I suppose …. 1988 or thereabouts. It opened in 1977, partly to rescue from demolition a church, which ironically sat just outside the gates of Lambeth Palace, home of the Archbishop of Canterbury (generally known in UK as the Archbish). A rather ruinous church with an interesting and horticulturally significant graveyard (the tomb of John Tradescant (c1570 – 1638), the first great plant-hunter in British history), made a useful receptacle for a collection of old tools, gnomes, seed packets and other garden-related bits and bobs. It immediately fulfilled a need, that of a gardening nation with no museum for a favourite hobby in the capital. Besides, London has always been a bit short on odd little museums, unlike Paris, which has loads, and Mexico City, which has more museums than anywhere else - all of them shut on Mondays (guess what day of the week I was last there?). 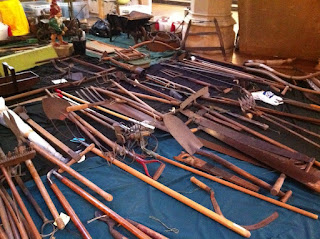 The Garden Museum used to do a very good plant sale. It still does have a spring plant fair (this year - Sunday 29th April  10.30 to 4pm) but I find it hard to believe it is quite as good as it used to be. In the days when I had my nursery (1986-1992) I used to be one of the sellers. The doors would open and it was like well-heeled locusts descending. You would sell everything, in what felt like a matter of minutes. The van went back empty, your pockets bulging with big rolls of notes. I remember Carol Klein always came as well, usually late and all-over-the-place but with fantastic plants that everyone loved. I remember it was the only time I met Graham Stuart Thomas, an old man with the famous buttonhole (although I can’t remember what the flower was). 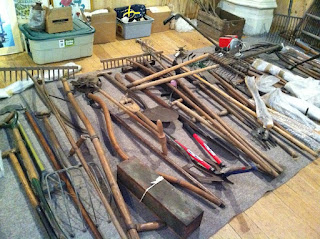 The museum bumbled on in the way that things do, and then they got a whizzy new director, who shook things up a bit, and the place has never looked back. Once run by the sort of well-meaning, well-off, but basically rather ineffectual people who run so many things in Britain (including usually, and most unfortunately, the country itself), times changed. It stopped being the Museum of Garden History and became the Garden Museum, which signaled that it was not just about the past but the present, a place to discuss the contemporary significance of the garden. New exhibitions sprouted, an elegant piece of Swiss-designed blonde woodwork cleverly made a bit more space without as much as a bolt into the listed building walls. Lots of dynamic young staff appeared. Things happened. And continue to happen. 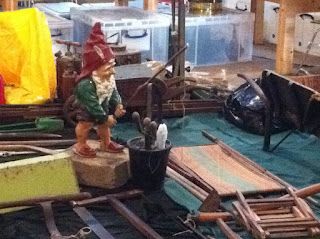 One ‘thing that happened’ was Tim Richardson and myself being asked to put on some evening events - the ‘Vista Evenings’ were born.  The event has a sort of literary festival feel, with Tim and myself questioning our guest/s in front of an audience. We’ve had some great evenings discussing all sorts of garden and landscape related issues. A bit like running a private dining club, as we all sit down afterwards at a big long table like monks (we are in the nave of a church by the way). We've had many memorable speakers and evenings, but the image that stays in my mind is that of Isabel and Julian Bannerman sprawled over a gravestone in the churchyard after one evening, the stone glistening with spilt wine, puffing away away on their Gauloises. Or the evening I was driven back through deep snow with Penelope Hobhouse and a neighbour of hers after a fascinating but freezing evening when she had been our guest. 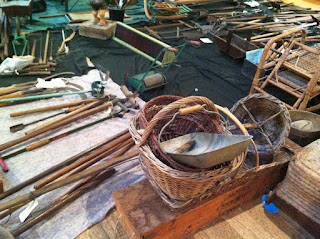 Being in a church involves various compromises which give the place that atmosphere of genteel discomfort and inconvenience which adds idiosyncratic colour to so many British enterprises. The dynamic young staff are all squashed into a windowless cryptlike room, like so many sweatshop workers, there is a tea/coffee machine on top of an ?eighteenth century tomb, the director’s office is reached by entering a door worthy of Professor Dumbedore at Hogwarts. It can be cold, which puts us off having Vista during the winter months. But I don’t think anyone would want to trade the church in for a ‘proper’ musuem building. And there is more to come, with a building for an archive to be built in the yard outside.

Oh, there is a nice little garden round the back. And intriguing planting out front. Drop in the next time you are ‘in town’.

Garden on a windowsill The January to March period in Britain is pretty dreary, its the dark getting you down as much as anything. Flowers growing on windowsills can make such a difference, and given my growing interest in bulbs, there is huge scope for making the most of light windowsills. We’ve got a nice long south-facing one in the kitchen which is ideal. The classic one is the hyacinth which we always get started in September to try to get them to flower for Christmas. Well, not managed that yet, but some started performing in January. The scent is fantastic and they last for weeks; and there are some good new colors too, like dark purples.
Read more...............
Posted by Noel Kingsbury at 10:23 PM 7 comments: