Adding to a meadow 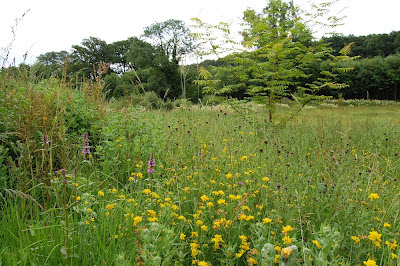 When we bought Montpelier Cottage seven years ago, we had no idea just how interesting our bottom meadow would be. We bought the place in the winter, moving in in July, and then slowly began to realise how species-rich the wetter areas of our three fields are. We planted some trees there in the autumn (all wetland species, mostly N. American), but I'm not sure now whether we would have put so many in, although they are so widely spaced, they will only shade a small proportion of the area. In fact I don't think we even realized our species diversity in that first year, as I think the person who sold us the house had had it all mown; our first guests (staying in our yurt) were a Berlin gardener (Christian Meyer) and a professor of applied ecology (Norbert Kühn) from TU Berlin; I don't even remember us discussing the flora. 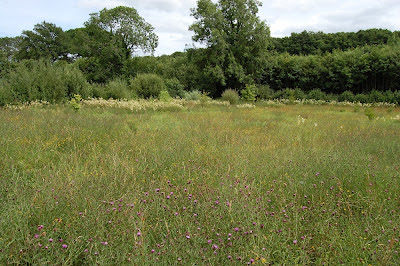 During summer the place just buzzes with insect life. The flora is unusual, in that the further down (and therefore the wetter) the less and less grass there is – which is unusual for us, as grass dominates anywhere remotely fertile in southern Britain; sedges and rushes take over and various forbs (which UK ecologists still call herbs, despite confusion with things you stick in your cooking or make tea out of) including two strongly spreading species with grey folaige: fleabane (Pulicaria dysentrica), a daisy family sp. not particularly common and Silverweed (Potentilla anserina) which is a classic west of Britain plant.

The British flora is a very meagre one, something I constantly grumble about, and there is very little in flower after June. Apart from our meadow! Lesser knapweed (Centaurea nigra) is pretty dominant visually then, followed in August by the Fleabane, so it becomes a blaze of yellow. The lack of grass and the dominance of forbs is quite extraordinary, and reminds me more of continental European montane habitats. We have lots of Spotted orchid (Dactylirrhiza fuchsii); in fact their numbers increase massively every year, although I do not really understand why – what are we doing right? And Ragged Robin (Lychnis flos-cuculi) – this is a short-lived species which I suspect depends on disturbance for continued re-sowing – a good argument for getting in a heavy tractor to mow it and get a few ruts in where it can seed.

What we have I suppose, is an 'unimproved' grassland – 'improved' meaning made agriculturally productive, and so then very poor in biodiversity. I am no luddite, and have no objection in principle to farmers increasing their productivity; if I am to point the finger it is to consumers who expect cheap meat, and lots of it, which is the driver for so much habitat destruction. Most of the grassland around here probably used to be like this, but is now overstocked with EU-subsidized sheep so fat they are practically spherical, and horses - which since the Brits don't eat them (why not?) are simply for leisure. Horses by the way, are very destructive of species-rich grasslands. But I can feel guilty about this now, as we have just taken up riding!

Back to our meadow. The odd thing about it, is the species which are not there, but can be found in some other nearby similar wet grassaland places. Two years ago, a friend (Sally Holterman )a bit further over into Wales gave me some wildflower seed she had collected from her land, species which were missing from ours: Devil's bit scabious (Succisa pratensis), Globeflower (Trollius europaeus), Valerian (Valeriana officinalis), Jacob's ladder (Polemonium caeruleum) and Betony (Stachys officinalis). I grew them in plugs last year, with fantastic Globeflower germination (much better than Jelitto seed!), and the pictures here, illustrate their finally being planted a few weeks ago.

Meanwhile Episode 3 of Dig, Plant and Bitch, the Soap Opera for Gardeners is now online -
Mowing close to the edgePetunia and Wayne Martin are getting ready to open their garden to the public on a commercial basis. In trying to think what to do with some disused farm buildings, Petunia has a brilliant idea, one which might upstage some garden restoration work that the grander folk up the hill at Mere Castle are busy with. The Castle’s gardener however has had to seek advice on his Japanese garden restoration from an unusual source, which has involved a secret trip he’s very anxious to keep quiet about. His secret advisor however has got a lot of grass to mow, with disastrous results - will he survive to tell the tale?

Go to amazon to get it for Kindle
Posted by Noel Kingsbury at 1:59 PM

A good read Noel, and I like the way you go on into the ground without too much preparation with the plugs, after you have done a spray off in April (UK) not disturbing the soil to much, keeping it stable? I guess this is a great way of planning it all out, and going back in at the right time to sort out any dominating species by countering with others? I'm away from my books right now, working on soil in Ontario, I shipped a lot of seed up from Colorado USA, but it is for this area and zone. Hopefully when I get my camera I can take some pics. Squirrels playing havoc with my seed beds, but it is great doing it this way, rather than buying plants individually from a garden centre, I have now got to the stage where I cannot imagine doing such a thing! Now I am back to the blogging I look forward to reading more on your meadow.

I was fascinated by for comments on re-establishing a meadow on your property. My partner and I recently purchased a property with a one acre meadow that follows a stream. The previous owners had it mowed to within an inch of it's life. We have let it regrow into a meadow and have started to re-establish a variety of wild flowers to it . Of course we have to contend with deer ( natures lawnmowers) that love the sweet shoots in the spring.. Keep up the good work !
regards andrew peake apsley ontario/canada