Argentina's northern provinces of Salta and Jujuy are very different to the rest of the country. The north-west ('El Norte') seem to be an up-and-coming place, the sort of place you move to to get away from the rat race, or be a hippy, or plant a vineyard, and generally live the good life. A bit like West Coast USA. The geography has similarities too, mountain ranges which go north-south means that climate changes dramatically in short spaces, in this case from 'jungas' - cloud forest, where trees drip with epiphytes, through 'chaco' (scrub) to cactusy desert. It's warm without being humid, and there is plentiful irrigation water, so it's a good place to be comfortable and to garden. 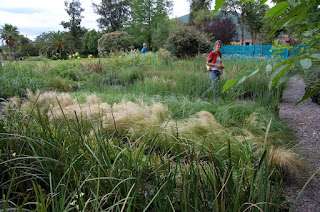 Shannon Iturrieta and Laura Smolko at Paisajismo Nativo entertained me for an afternoon with a hike into some cloud forest above their home in San Lorenzo, outside Salta. They are landscape and garden designers who are trying to use locally native plants as well as non-natives (such as the Neomarica above, which is a Brazilian species). They have a little nursery where they grow trees, shrubs, perennials and grasses from seed and other propagating material found in the region. 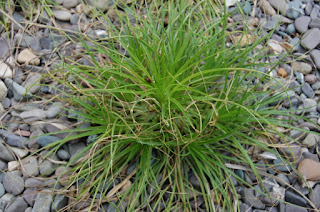 This is Puya mirabilis, a surprise for those of us who thought all Puya  were enormous and terrifyingly spiky. A good plant for garden detail. 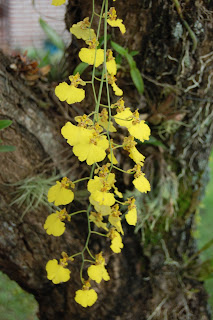 The fern above is very unusual, unique in fact amongst ferns for the way its fronds are arranged, so it looks oddly lily like. Can grow to 2m apparently. Plant Delights in NC appear to sell it. As for the Oncidium orchid - these grow wild in the woods above San Lorenzo. We rescued a few from a fallen tree, one of the luxuries of living in this part of the world is being able to just stick these wonderful plants up on a tree branch in the knowledge that the weather will look after them. 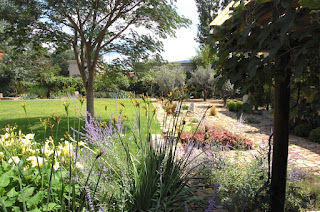 Veronica Saguier is a pioneer garden designer in the area. She used to teach at the John Brookes garden school in Buenos Aires. Her own garden very much reflects the strong spatial sense one might expect from a JB graduate. There are plenty of familiar plants but quite a few unfamiliar ones as well. Veronica too has a small nursery area where she grows locally-native plants unavailable commercially. 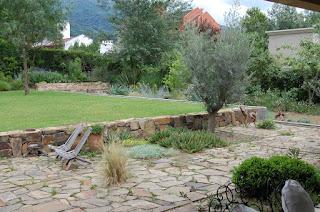 One of the nice things about Veronica's garden is the way that it is not too tidy, with odd seedlings appearing in the paving. She is also letting Tillandsia (air plant) bromeliads take root in the rough plaster of the house walls, and even let a self-sown Bignonia climber begin to grow up the house wall too. Over-maintenance is one of the curses of gardens in countries where it is possible to employ staff relatively cheaply, linked to a strong cultural presumption that a garden has to be 'tidy'. Veronica is clearly trying to break this. 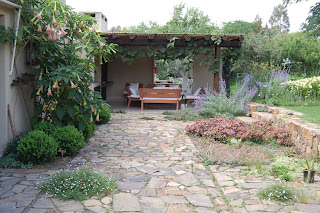 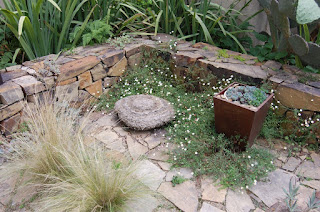 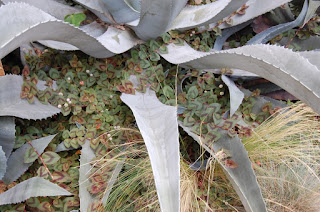 Some nice interplanting, or pehaps I should say, letting plants find their own places to grow. Here a small polygonum species and an agave. 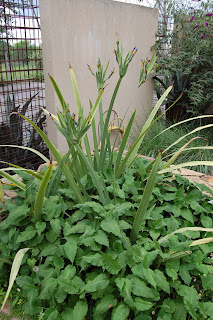 Here, more plant intermingling: Persicaria amplexicaule and Neomarica caerulea. I asked about how the persicaria does, as in the US Midwest where it suffers terribly from fungal diseases in the humid summers. Not here apparently - summer air is dry here, so providing very healthy growing conditions.It can be cold here, when a cold air mass descends from the Andes, down to -9C for short periods. Clearly not enough to kill bromeliads, orchids and other sub-tropical species. 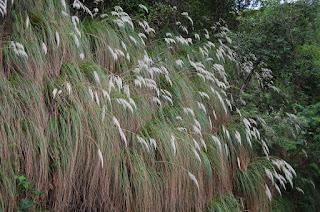 Finally, a really good grass, we saw a lot of, Lamprothyrsus hieronymi. But only on wet cliffs, never anywhere else, so often along a roadside, where there was an embankment cut in. According to Shannon though, it is very adaptable in cultivation - taking some shade or full sun and various soil types. According to the Plant Finder, it is in cultivation in Britain, but I have never seen it. Anyone grown it?

The latest episode of my gardening soap opera - Dig, Plant and Bitch, is now up. See the Amazon Noel Kingsbury page for more details.
The (wrong kind of) Garden PartyNurseryman James Treasby has a repeat visit from a mysterious new customer, gardener Johnny Dalton is in the balmy surroundings of Mere Castle’s south-facing borders recovering from what could have been a disastrous falling-out with his employers. Meanwhile, rival gardeners Petunia and Wayne Martin are planning their own, artistic intervention for the start of their open gardens season while continuing to deal with the fall-out from their previous gardener. Johnny’s troubles are not over though, as his dealings with several of the village’s less salubrious characters are about to be exposed, as the completion of the Japanese Garden restoration is celebrated with an impromptu party.

Wow...reading this, I realized how very little I know about that whole area. LOVE the Lamprothyrsus...how amazing would it be to recreate that effect somehow!