It looks like the goldenrod has taken over, but in fact this is only 16 plants, and they are only about 20-25cms across at the base. I took the photo a few weeks ago.
This area, which is butterfly heaven, finished flowering about a month ago, so it'll be time to chop it down soon. These are actually some research plots, which have just finished their fourth growing season. I set them to look at plant competition, and they are proving very interesting.
When the RHS trial a plant, they only do so for two years for a perennial, sometimes three. By which time some species are only just getting into their stride, others thinking about packing it all in – so next year one may just get started on throttling its neighbours and another may be dead. The much more thorough German trials don't last for more than three years either (I think).
My intention with this lot is just to leave it there, until it is absolutely clear that we have clear winners and losers – and in fact, I don't think that is going to happen. What seems to be developing is some sort of co-existence. Which is what I have been hoping might happen all along.
I want to  explain here what I am doing with these plots and why I have them.
First of all, why?
A long-held interest has been to develop plantings which are low-maintenance which local government and other large-scale users could use. And.... this is the big proviso, in the British climate, particularly the wet and mild west. It is an incredibly weed-friendly climate, particularly for our native grasses, which will outcompete 95% of perennials. So - it's all got to be about effective ground cover. My aim has always been to find a combination of species which can so dominate the ground that the grasses, nettles, et al. can't get a foothold.
The majority of these effective ground covers: alchemilla, geranium, nepeta etc. species may be colourful but they tend to lack structure. The Piet Oudolf style which inevitably dominates many people's thinking these days, focuses on around 70% structure plants - more upright, with less growth around the base. The problem is, that however much these species may dominate underground - some like Veronicastrum virginicum and Solidago spp. have strong root systems, they don't create shade around the base and are so vulnerable to wild grasses etc. germinating at ground level and then dominating the ground and - worst of all, taking over the centre of perennial clumps, which usually means 'goodbye perennial'. So these species have to be a minority and they have to rise up out of as thorough a ground layer as possible. Getting this mix right is part of why I set these plots up. 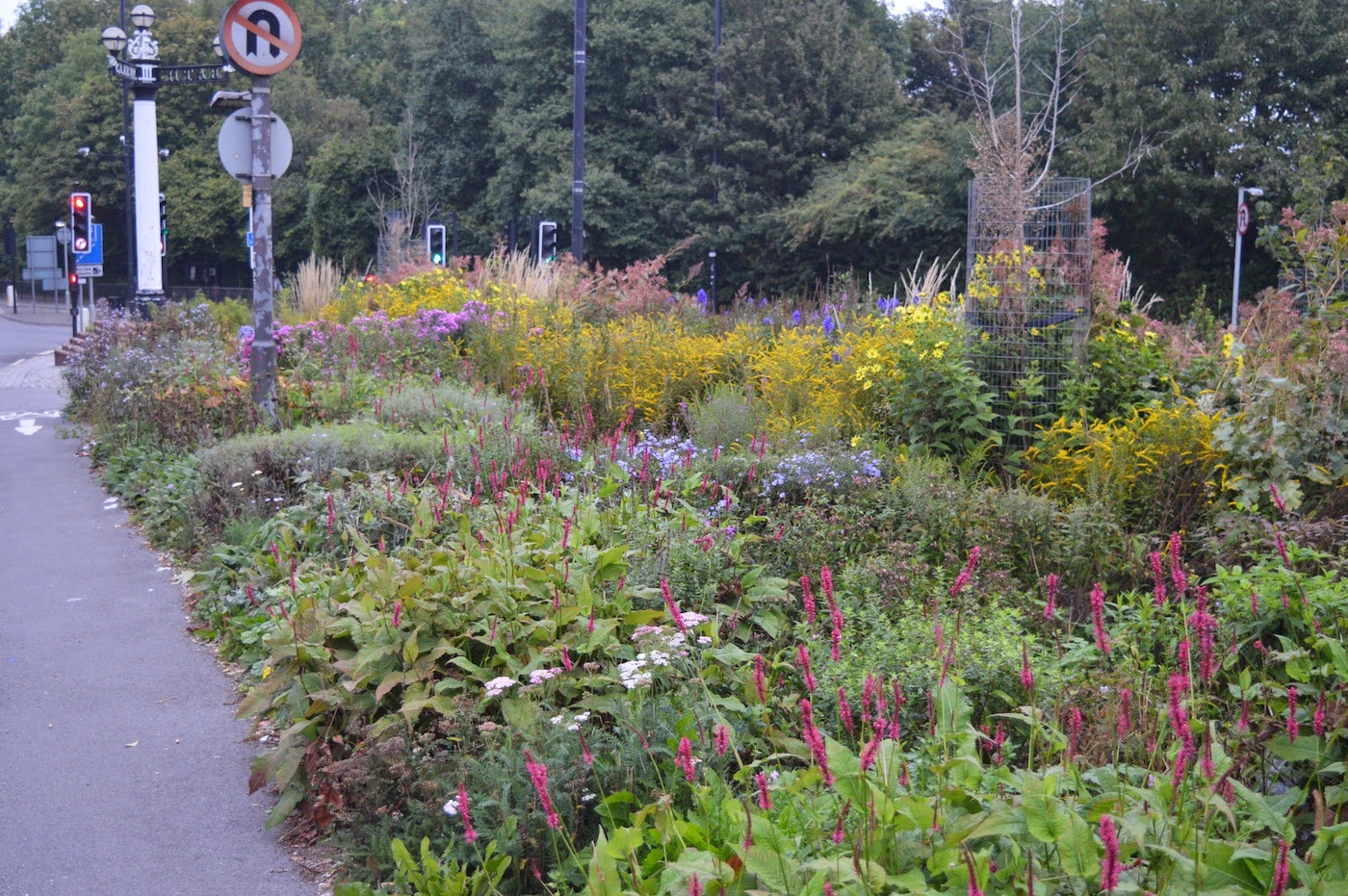 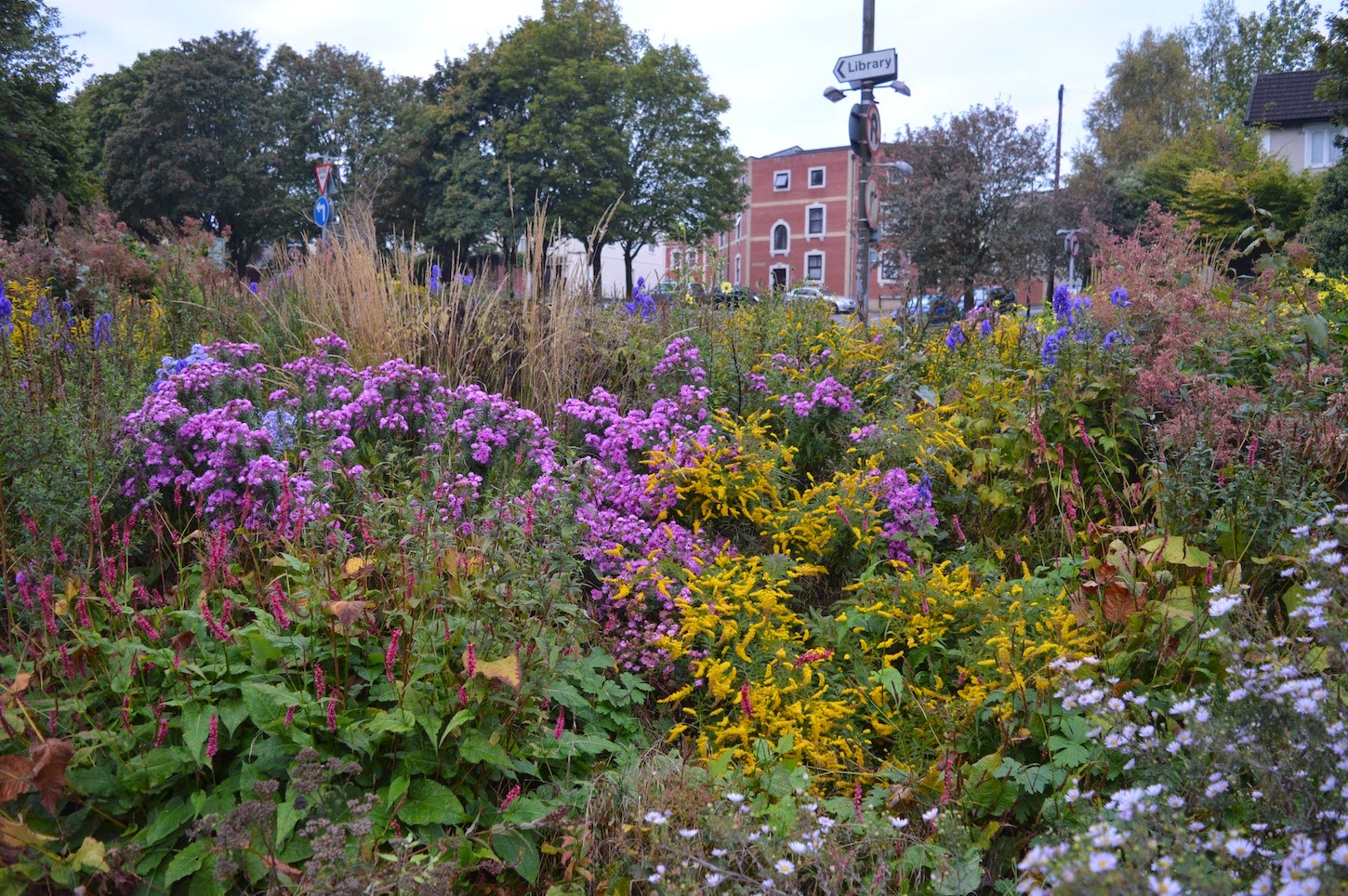 Plantings at Three Lamps junction, Wells Rd. Bristol, which I did about 8 years ago, they have had little maintenance since (annual cutting back, some basic weeding) and they are looking jolly good! Vindication of a planting strategy based on robust perennials which I am trying to perfect as a planting formula.

So - the research plots:

There are eight of these plots:
in two, the four grey squares are filled with:
- Calamagrostis 'Karl Foerster'
- Panicum virgatum
- Miscanthus sinensis 'Rotfuchs'
- Iris sibirica
The iris is included because it has a particularly intriguing habit of 'self-mulching' with its dead leaves which seemed to be a possibly very effective means of controlling competition.
Of the other species:
Herbaceous perennials with a dense mat of low foliage:
- Alchemilla mollis

Evaluation is done every year end of August or early September. The first two years I did it, but then the last two I have got volunteers to have a go. The thinking is that this might be more objective, and I wanted to see how easy it was for other people to make this judgement. Each plant in each plot gets a grading: 1 for good growth, 2 for surviving, 3 for clearly poor growth or decline, plus of course dead or disappeared plants. Whether flowering or not is also noted.
Thanks to Richard Sutton (of Hidcote) and Saskia Gretton Kewley.

Now, I have not yet done a formal detailed evaluation of the results, but this is what stands out so far:

Posted by Noel Kingsbury at 5:24 AM

I love the concept of letting strong growing plants reducing weed seed germination and generally smothering them. I presume you must be very careful to eliminate perennial weed before you start. Many gardeners fails to do so and couch, ground elder etc necessitate abandoning such projects!

Very interesting post Noel. I've been involved with a handful of public sites that require long term interest but irregular and simple maintenance. Had similar experiences with Calamagrostis and Miscanthus. Carex 'Evergold' has proved a good ground cover with year round interest. Eryngium bourgattii has also proved very succesfull on a very well drained site with poor soil.

your posts are always very interesting, this one included ! I was wondering about the actual planting density. From what I understand, the surface spanned by each research plot is 1.5x1.5m and includes many species, however you mention later that you planting density is 7 /m2, which would mean very few plants per plot. Am I getting something wrong ?

I hadn't thought of mixing iris with other perennials, looks interesting. In my neighbourhood most people plant them alone in big masses along the roads at the border of properties.

I recognize this plot, and ironically will be passing it this morning en route to see how Oudolf's latest scheme is daring (at Bruton).

I would love to get involved in any of your Bristol projects, Noel!