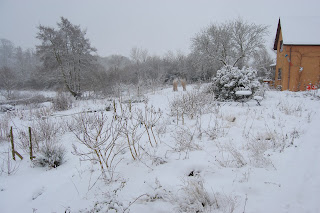 So with temperatures down to –13C (which I suppose might be regarded as a rather pleasant day in some places where this is being read), what else is there to talk about. We have had several weeks of this, which seems to add insult to injury.
Last winter was pretty bad too. Anyone who wants to see what survived and what didn’t should have a look a the RHS report, based on a nationwide survey. Losses as interesting as survivals.
I wonder just what impact this winter will have on the fashion that has developed over the last twenty years for growing tender stuff. During that time a whole generation of people have become gardeners without knowing what a ‘proper’ British winter is (though in fact this is worse - a central European winter) – this 20 years has co-incided with a time when the garden industry went on its great expansion.
I’d better put my hand up. Back in the late 1980s, early 1990s I was certainly one of the early pioneers of the great gardening boom’s promotion of the less-than-hardy. I was actually primarily interested in widening the range of cool conservatory plants – that great swathe of flora which just needs protection from freezing (and in many cases are ok above (round about ) –5C. Selling plants at RHS flower shows in London (remember them, before the RHS decided it could make more money renting the halls out than running flower shows – which some of us naively thought was their core mission) I remember being vaguely shocked by people saying that they have planted some of my stuff out and it had survived. We began to realise just what a warm microclimate London has – and indeed any big city is warmer than its surroundings.
I long ago moved onto hardy perennials, which are nearly all from climates far more severe than ours, and living in the Welsh borders I am not tempted to be too experimental on the hardiness front. Maybe one day I’ll live by the sea and have one of those fabulous west coast gardens where you can mix and match from different climate zones. Maybe in my old age. But back then, I was certainly part of that zeitgeist, and I remember thinking that some of my colleagues who just got deeper and deeper into the whole hardy exotic thing were doing something which was just going to end in tears.

Anyway, what happened in the 1990s was a coming together of several things: a long run of mild winters (assume global warming, probably on top of cyclical climate change), an increase in plant introductions from borderline frost climates all over the world which went hand-in-hand with the great consumer gardening boom. Lavandula stoechas was never seriously regarded as hardy, maybe a few folk in Cornwall grew it. Mild winters created an opening for introductions from different parts of its range – we got aware of the concept of provenance, where something came from, how (in some species) there are appreciable genetic differences  in ability to survive cold depending on between plants over an altitudinal and latitudinal range. And then of course you can hybridise, so Lavandula stoechas blossoms into , quick look at RHS Plant Finder – 55 taxa in commercial cultivation in Britain.
By the way I do like Lavandula stoechas, but I am going to use it to illustrate my point. Wholesalers started selling it, probably run by people too young to remember a cold winter (am I sounding like a grumpy old man here?), what with those little rabbit-ear ‘flags’ on the flowers the gardening public just love it. I remember, years ago, looking at some in a garden centre, at the little plastic tag which tries to give information without actually using any language (like IKEA flat-pack furniture), and no mention of (lack of) hardiness.
So here we are, with a whole new diversity of plant life in our gardens, being subjected to a big experiment. There will be lots of surprises when the big thaw finally happens. I just hope that the growers of ‘plants on the edge’ make notes and let the rest of us know about survivals and casualties.
Posted by Noel Kingsbury at 9:49 AM 2 comments: