The view AT Federal Twist 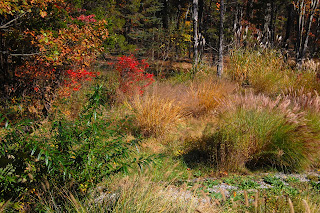 James Golden's blog View from Federal Twist is one I've followed for years, but James has been a follower of mine for longer - he read my 1996 book The New Perennial Garden when no-one knew what a blog was.So it was with great interest I drove up last week from Philadelphia just over the Delaware into New Jersey. 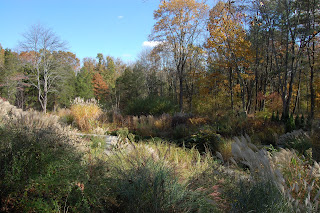 I feel honored when gardeners follow my ideas and I love seeing what they do with them. The garden at Federal Twist is very much what I have in mind when I write – a journey through lots of rambunctious vegetation. Its the end of the season so the grasses dominate, miscanthus varieties especially, but some Aster tartaricus hanging on, the native asters and even ironweed having gone to seedy silhouettes. There's a big Inula which has self-sown a bit, and I can't help feeling I'm glad it doesn't with me. We are surrounded by forest: tall maple, beech and oak, and the colours are magnificent, the perfect setting for a glade of perennial seedheads. 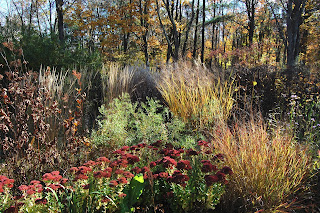