Not hot, not cold - just perfect for gardening in Scotland

The opinion of many southern English gardeners is that Scotland is probably not a great place to garden, and many of my colleagues on the garden lecture circuit refuse to go up there - 'it's too far' they say. My frequent trips there over the last few years have convinced me it is actually a very good place to garden, if not to sunbathe. Plants rarely suffer from drought, even on the dry east coast, as summers are rarely hot enough to cause drought stress. Winters are often moderated by the sea of a heavily indented coastline; the cold is nothing compared to central Europe or much of the USA.

The result is gardens with an extraordinary habitat 'mix and match', and lots of the lush plantlife which gardens further south can only grow in shade or waterside or bog situations. You get used to seeing vast sprawling rodgersias, meconopsis and huge drifts of Himalayan primulas.

I've just led a Gardens Illustrated tour in Scotland, although we stuck to the area around Edinburgh. We started off staying at Whitburgh House where Vincent Dudley's gardening for Elizabeth Salvesen is resulting in a new garden with some fantastic colour combinations and sculpture.
There is a great deal of innovation here. Intellectually (think Little Sparta and Charles Jencks at Portrack) and in planting design. We visited some gardens with some incredibly disciplined planting, the sort of thing that you feel real gardeners might not be capable of carrying through. Robert Dalrymple at Broadwoodside freely confesses he hates gardening (but has a gardener) and achieves some very powerful effects through 'less is more'. The man is a graphic designer - and it shows. Would I like to let a garden designer loose on designing a book - I'm not sure.
Portmore has some quite traditional formal garden spaces but a lot of very simple planting revolving around strong colours. The power of the repetition of a good idea. Alchemilla conjuncta used as a very neat, well-behaved edging attracted attention too. There were some more complex colour combinations too.
Portmore also had some wonderful old fashioned greenhouses with lots of streptocarpus and other exotica. I love these places. Plants just being grown for the simple love of growing them, an exuberant spirit of horticulture as Victorian as the cast-iron of the structures that you find in gardens with history. 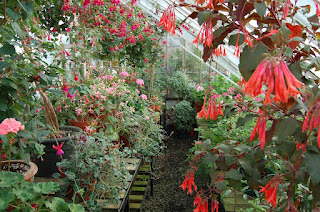 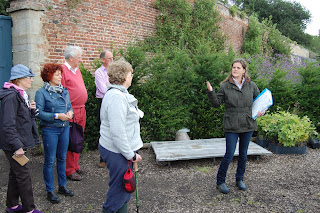 Here's our group with Skye Hopetoun at Hopetoun House - she is someone to keep your eyes on (and I'm good at spotting talent in the garden world as you may have noticed by now). She is creating an incredibly ambitious new garden in the old kitchen garden of the house. Very brave of her to let us in in the plastic ground cover, portaloo, piles of debris stage. We felt very privileged being in at the beginning of what could be a very bold new garden. 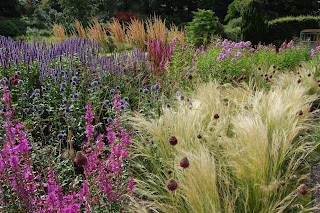 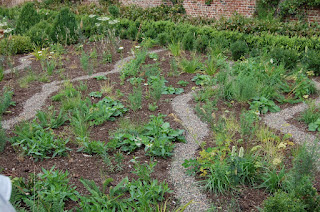 The planting above, just completed, is particularly interesting. It is based on a kind of repeating pattern, but developing a rhythm as certain plants come in and out of particular blocks. 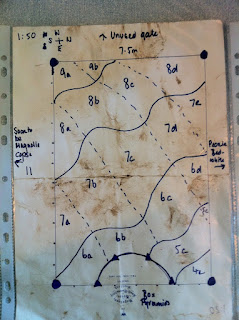 I find this seriously interesting. Very few other people are doing this kind of thing. A lady and a garden to watch.

We had quite an Argentine/Uruguayan element to this year's tour. Its so special that people travel all that way to tour with us. 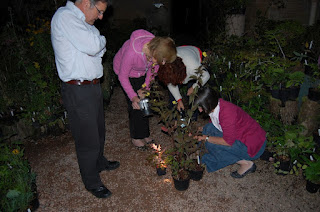 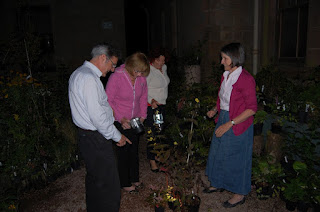 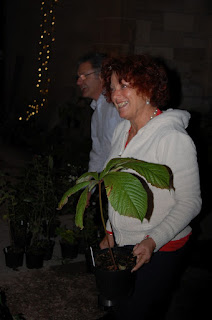