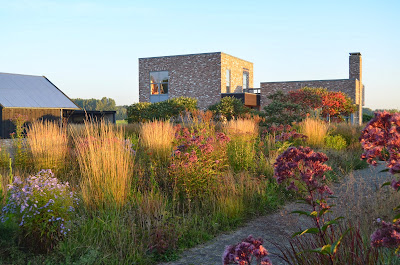 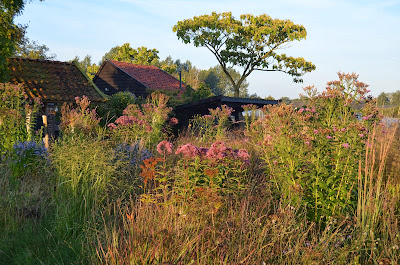 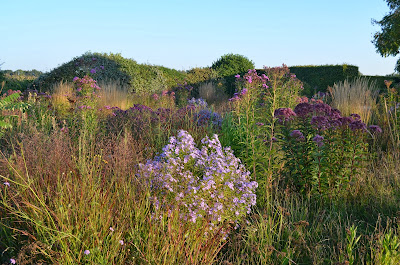 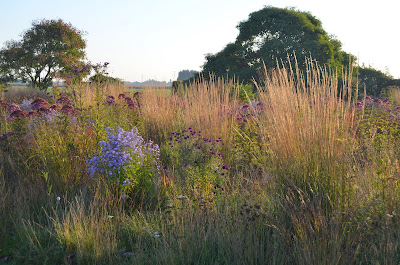 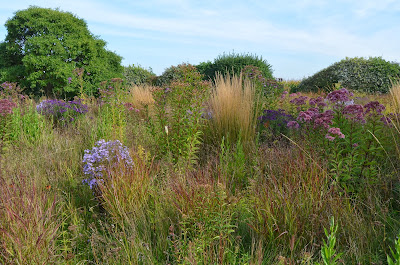 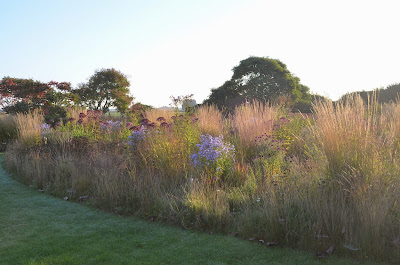 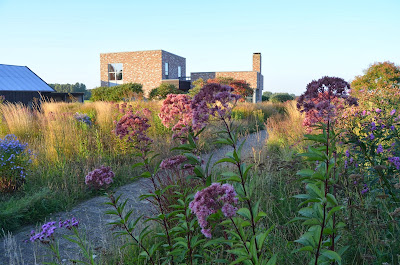 Very interesting... I had never really thought about why some concept such as these tend to work so much better in our continental climate here than in Western Europe, but it makes perfect sense.

Quite inspiring. As one a little sceptical about the high maintenance requirements of Oudolf's work I am delighted to see he is promoting the concept of garden plants in grass.
Many garden plants are superior sources of nectar and pollen for insects and I dream of seeing havens of such plants in the countryside.
Just dreaming

Not altogether sure I understand this. We planted into the original undisturbed 200 year old grassland (pasture) - here http://veddw.com/south-garden-wild-garden-headstones/.

Just took choosing things which are vigorous enough to compete.

Did you mean planting into grassland with just British natives? There are, of course, quite a few of those happily co-existing. (some commonly known as weeds) (like my favourite willow herb)But they were already there..

Having a garden on sandy land in the outskirts of Berlin, I agree with your statement that substrate is 'clearly everything' on land with 'post-industrial' waste'. While valued perennials such as Delphiniums are failing here, grasses, like Miscanthus , Calamagrostis ; Pennisetum combined with- Aster novae-angliae and Eupatorium are great also for my small garden.These plants in my mixed border look wild, but are not native..the only native ones here are agrimony, some sort of wild thyme and cypress spurge.
In Karl Försters sunken garden in Bornim (at Potsdam), which is only an hour's drive from my garden, you can still admire grasses and perennials living together in perfect harmony since years. I visit it regularly, the nursery next door is selling (for my happiness) still over 100 species and varieties of grass.
Your photos are fantastic!
LG
Sisah

Indeed most people by now believe that prairiegardens are of very high value for butterflies and other insects. Prceptions can deceive.

The concept of Piet Oudolf was to create low maintance beautifull gardens en while they are really that, very beautifull often, the value for indigenous species of butterflies and also e.g. wild bees is often rather limited.

Yes butterflies tend to be very opportunistic when it comes to obtaining nectar and therefore some of them use alien species for this, as a source, as easy as native plants.
However many species do only so when easier sources are not available and some don't at all.

Yes some of the polylectic bee (including bumblebees) species do have a similar opportunistic behaviour and use also aliens as a source of nectar, however many bee specie are oligolecic or even monolectic, which means that only very restricted plant resources are being used to collect pollen for the new generation.

The grasses aplied in prairiegardens are mostly alien ( except of course when aplied in their original countries) and are therefore of no value as host plant to the caterpillars in contrast to the native grasses.

Most other host plants for butterflies do hardly occur in prairiegardens, not even when they are acutally beautifull plants like e.g the hardy violets.

Similary many of the very valuable plant species which are of utmost importance to keep the native bees species, e.g Campanulas are often not aplied.

Moreover , the maintenance scheme of these garden of often not apropiate for the wanted wildlife species.

Please do not confuse a beautifull (prairie) garden for the eye with a garden which can be as beautifull but is at the same time designed to harbour as many species of wildlife as we can.

A native meadow for example when not treated with fertilizers and with a well designed phased management scheme has far more value for butterflies and bees.

A wel designed border could be too. It takes however a far wider study into the behaviour of butterflies, wild bees and other wildlfe to really achieve this goal.
The prairiegardens where desigend with a totally other purpose.