Where have all the wildflowers gone? ..... (apart from the ones on the way to the airport). 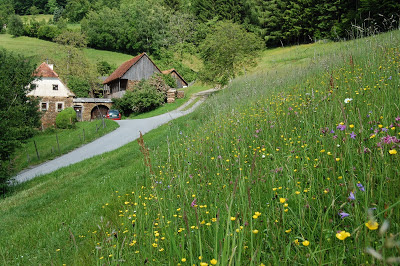 We had a few days recently in Austria. One of the things I  had been looking forward to was seeing hay meadows. A long time ago (an embarrassingly long time ago) I had driven from Salzburg to Vienna over the mountains in early June and been blown away by the incredibly wildflower-rich meadows. One place I particularly remember, Iris sibirica was flowering amongst orchids and 'the usual' selection of ranunculus, knautia, lychnis, campanula etc. Traditional hay meadows have a high proportion of non-grasses to grass, many of which are very colourful wildflower species, so biodiversity is very high. The herb-rich grass makes for an interesting chemistry for the cows to eat, and is one of the main factors behind the very distinctive taste of Bergkäse - mountain cheese.


This time I saw very few wildflowers - the reason being that farmers have largely gone over to silage rather than hay as a means of storing grass to feed to cattle over the winter. Hay is a nightmare to make as it needs several days to dry, and things can go badly wrong if it is stored too wet (like spontaneous combustion!). As one farming website says "All in all hay is a vale of tears".  <http://www.farm-direct.co.uk/farming/stockcrop/grass/silagedet.html > Silage is the stuff that is stored in those big plastic bags that can be seen lining the edges of fields, or it is stored in a big 'clamp' on the farm. It is essentially a fermented grass, with a higher moisture content than hay. Though it is difficult for us to believe, it is more palatable and digestible for the cows than hay.


Silage is cut earlier than hay, before most of the wildflowers in the grass flower and certainly before they seed. The bad news is: a huge drop in wildflowers and for biodiversity; it must be particularly bad news for pollinators such as bees. I discussed this with some Austrian colleagues who said that in some areas where conservation is more of a priority, there are subsidies for farmers who make hay rather than silage, but otherwise, no, over the last ten years there has been a huge increase in silage at the expense of wildflowers.

In Britain and the Netherlands farmers had done this for some time, and is part of the reason for the almost total disappearance of hay meadows - along with conversion to ryegrass monocultures and increased use of nitrogen-rich fertilisers (which include organic as well as synthetic fertiliser). Farmers have to make a living, so one can hardly blame them. In addition to which, not many farmers have any real interest in conservation (although more do now than in the past). There is no real difference between organic and non-organic either. The marketing departments of the organic food industry like to portray their products as being in tune with nature and conservation friendly, but the fact is that they are under the same economic pressures as anyone else - even more so, as organic farming is about 35% less productive per acre or hectare than non-organic, and is therefore a greater enemy of biodiversity than non-organic as it means considerably more land has to be farmed in the first place.

We have several acres of grassland on the England/Wales border, which has an interesting wildflower flora, in places very diverse indeed, and we try to manage it for wildflower biodiversity as well as we can. In this way we are very similar to many other middle-class people who have moved to the country and bought land which is now too uneconomic to farm. Some people (and a lot do this in Austria) get in a local farmer to cut their grass - mostly this means silage of course, although a few in our area still do hay. But trying to get a local farmer in to do anything is a complete nightmare - cutting a small field for not much economic return is hardly a priority for them, added to which is a completely different attitude to time and to commitment (a polite way of saying that they often seem to be utterly hopeless at getting things done, keeping you informed, and in the case of one local character never knowing what the weather is going to do - yes really! - to be brutally frank, I think a lot of small farmers are actually pretty bad at what they do).  There is of course no understanding of priorities for biodiversity management.

On the big scale, the preservation of hay meadows will only happen if farmers and landowners are given an economic reason to do so, i.e. subsidies. I am not generally a fan of subsidies, which are a vote-bank for politicians in many cases (just look at the farmers of the US Midwest, a great case of welfare-dependency if ever there was one), but here we can argue that through subsidies for conservation-friendly practices, we as taxpayers are paying for a product - biodiversity, which in turn can benefit tourism. On the small scale, an interesting example of people getting together is the Monmouthshire Meadows Group where people in the lower Wye valley, many of them with very small areas of hay meadow have banded together to share experiences and have bought an alpine hay baler so enabling them to make hay on a small scale and so preserve their wildflower rich meadows.

Actually in Austria, we did get to see some fantastic wildflowers, with one of the most biodiverse and colourful places I have ever seen in Europe - when we were on our way back to the airport. This has happened before - I remember Roy Diblik taking me to Chicago O'Hare Airport and stopping to look at the wonderfully named Shoe Factory Road Prairie on the way. Eichkogel, just south of Mödling, is a limestone hillock with a long history of management for hay cutting and a fantastically diverse dry meadow flora. Famous amongst Austrian botanists apparently. A wonderful way to end a trip.

Posted by Noel Kingsbury at 7:32 AM 9 comments:


I was in Vienna last week to do a lecture as part of an exhibition on plant breeding as an art form. One of those events which displays the city's imaginative thinking and creativity at its best. Check out their website:http://www.landscapewithflowers.net/ - most of the entries on the website are bilingual German/English. It is interesting, beautiful and well-worth looking at in some detail.

Its not often that plant breeding is defined as an art. Here it is explored as such through both the exhibition, at the Vienna Botanic Garden and on the website and through some imaginative, almost whacky artworks. A painting by two artists and landscape designers - Anita Duller and Hannah Stippl merges with a planting in a downtown gallery which includes both real and plastic flowers both inside the gallery and immediately outside in a window box. Hannah (also the exhibition curator) and Anita have run workshops in London at last year's Chelsea Fringe where they get people to paint and then create plantings based on the paintings. 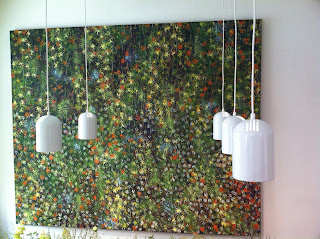 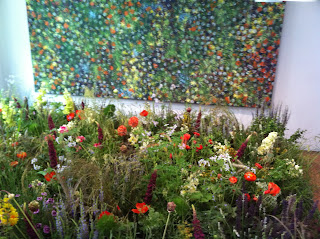 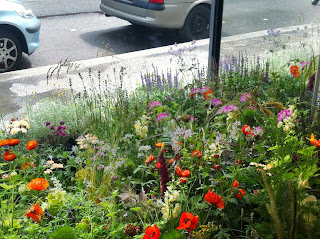 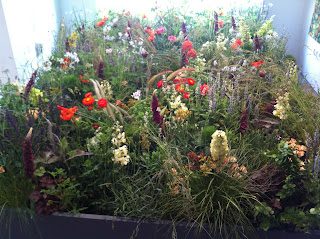 The opening event at the Botanic Gardens featured edible flower jelly (very Vienna) while the gallery includes a small petunia plant which contains a gene from an artist. In a country where attitudes to GM food are amongst the most hostile (and quite honestly most irrational) I would have expected the place to be bombarded with protesting biodynamic eco-warriors. But not a bit of it - no-one has objected - progress indeed!