Garden or Museum - what’s the big deal with heirloom veg? 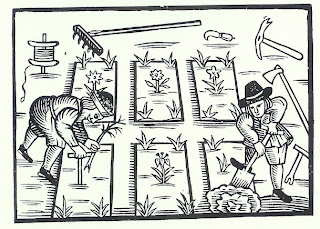 Heirloom vegetables and flowers (or as well call them over here in the UK – heritage) have been big for some time now. Much more so in North American than home. In fact I am always really surprised about how enthusiastic American gardeners are about ‘vegetables our grandmothers grew’. The love of heirloom veg however goes along with a certain hostility to modern varieties, and modern breeding methods such as F1 hybridisation, particularly claims that heirlooms taste better; there is also an undercurrent that heirlooms are somehow better for the world, more ethical. Here I’d like to challenge this and stand up for modern scientific plant breeding. There is also a political point I’d like to make. Read on..........
Posted by Noel Kingsbury at 1:43 PM 1 comment: 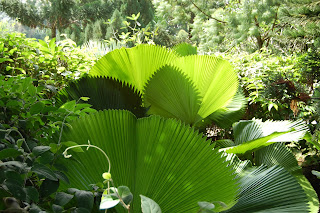 How to describe the city state of Singapore? Downtown is like an American downtown (with even more malls – yes really!), the suburbs like….well a kind of tropical multiracial version of Sweden with a rather bossy government – the same well-designed but rather bland housing estates of modestly tall tower blocks, all separated by amazing amounts of greenery. Which is why I’m here of course. The place really does live up to its reputation as the Garden City of Asia, or indeed the world. I really think they are the global leaders in integrating planting into urban spaces and in making almost seamless connections between wild spaces/nature reserves and conventional urban parks. 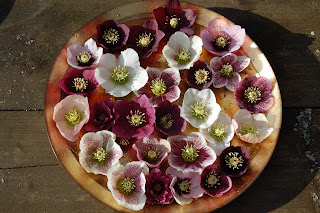 There was once a time before hellebores. Well there was only Helleborus niger, the Christmas Rose, and a few other oddities, mostly green and murky. There were some pink and spotty creations courtesy of Helen Ballard, a rather grand nurserywoman of the English midlands, available for what seemed like exceptionally large sums of money for a perennial. Ballard had actually done rather a good job, with what turned out to be limited genetic material, giving her creations cultivar names, and of course propagating them as one does with cultivars – dividing them. This was the 1980s.

Hellebores do not form large clumps, and depend on seed to distribute themselves through the rocky woods of their (mostly) Balkan homeland. So there wasn’t very much to divide, which explains the price tags. Today’s hellebore passions are based on two things: one is new genes from the wild, hugely extending the range of colour and the other is the realisation that you can get very good plants from seed. So, forget the sharp knife, and the trauma to a plant which does put up with being dug and up and split like most other perennials. Forget the cultivar names too. “Do not propagate your cultivars from seed” is a mantra in the garden and nursery world. Turning the hellebore from an elite possession into an item of mass production required that this mantra be resisted, and so too that ego-driven urge of every nurseryman to name plants.
I remember a report in (I think) the Hardy Plant Society journal in the very early 1990s reporting someone bringing back seed (or maybe plants) of a near-red hellebore from Slovenia, maybe newly independent, or maybe awaiting its short war of freedom against Milosovic. The place was not exactly off the beaten track, indeed it (as Yugoslavia – some countries change names more than plants do) was part of package-holiday land, yet my memory of the article had a tone of deering-do  plant intrepid hunterdom about it. Others followed. Piet and Anja Oudolf went further south, to Bosnia, remember people discussing imminent war, and came back with some plants with black flowers. Will McLewin, retired mathematics professor turned botanist/nurseryman, carried on travelling in the region, whenever peace and wherever landmines allowed. He took his van to places which were never part of package-holiday land, like Kosovo, usually basing himself in the increasingly prosperous Euro-spending Slovenia, with Stane Susnik, a television producer with a passion for gardening and his country’s rich, varied and beautiful flora.
The results of all this travelling was a huge range of genetic diversity. Hellebores are easy to breed, if slow to germinate and grow. John Massey of Ashwood Nurseries and Roger Harvey have been particularly good breeders. The plants now come in a huge range of colours, with spotted and striped and picoteed variants. Devotees attend hellebore days and compete to buy the best-looking plants. Being seed-raised you cannot just buy a plant with a good name, you have to buy it in flower in order to know what you are getting. Or you can be patient and buy seed, and hope that your investment produces some good returns.
In my current garden it seems that every hellebore seed which hits the ground grows. We have to weed them out. Which seems terrible. Three years ago I transplanted a load, and lined them out. The breeding is not very sophisticated (one nurseryman breeder once said to me – “who’s Mendel?”) so I had high hopes that there would not be too much genetic backsliding. Which indeed has turned out to be the case. Most are dark red (no blacks though – L ), which are the most vigorous, some lovely spotties (I LOVE spotty flowers), a decent number of picotees, some big whites and the occasional pale pink. So I either give them to friends or distribute them around the garden.
Growing on your own hellebores from seed (if you have the space) is actually vital. The plants do not go on for ever. Rember these are not ever-marching-forward in steadily-spreading clumps, chop up and put bits in yogurt cartons for the church fête type perennials. Plants I bought from Ashwood 12 years ago are now very much declining, to some extent their seedlings replacing them, but some replanting is now necessary.
From the Balkans to the World. I have always wondered whether we would grow them if they flowered in June. Probably not… or well no-one would have bothered sleeping in vans by roadsides in Bosnia in order to gather their seed. But for the end of winter their dusky, sometimes rather mournful, sophisticated shades are perfect.
Posted by Noel Kingsbury at 8:54 AM 2 comments:

Email ThisBlogThis!Share to TwitterShare to FacebookShare to Pinterest
Labels: hellebore 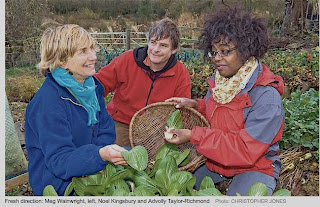 For a couple of years now we've had trainees from the WRAG scheme, 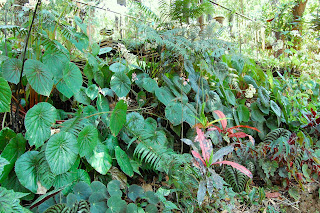 
west India is a real inspiration and a very special place. Its basically a private trust who own a slab of virgin forest (in the Western Ghats bio-region, where only 3% of the original forest is left) and who are involved in habitat restoration on former tea and coffee plantations. They do also have a very good display garden of tropical flora (local, Indian and global) for educational purposes. Their conservation and research work is clearly rooted in a lot of good horticulture. I have a fantasy of coming here and spending time learning about the very different ways that have to be used to manage tropical species; there is clearly a lot to learn. Read on........
Posted by Noel Kingsbury at 11:27 AM 1 comment: