Petunias and democracy.....Travels in Kyrgyzstan Part 3 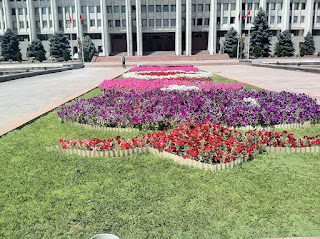 Bishkek is my first experience of the former Soviet Union (USSR), words drained of real meaning to a younger generation, but for any of us who grew up and were politically aware before 1989 a major part of our consciousness of the world – but now all that seemingly indestructible grey concrete has turned to dust. I’m here for a botanical tour of north-east Kyrgyzstan, the most mountainous and remote of the former USSR’s ‘Soviet Socialist Republics’, up against China’s own remote province of Xinjiang. Amazing to be in a country which was once almost totally closed to outsiders, and about which we knew almost nothing. Now it is developing for tourists, but it feels like virgin territory for visitors.

There are more pictures on a Flickr site here.