The sun may have (thankfully) set on the British Empire but not on its most successful invention.


A recent post by a colleague on Gardening GoneWild (Tovah Martin) about planting up her lawn with plants rather than the heavily-shorn green stuff deals with what history may yet record as one of the great shifts in garden culture. Here I would like to take a hard look at this green tyrant and alternatives to it. Read on.... 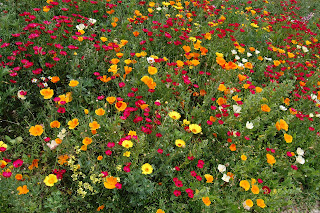 Sheffield. Once 'steel city', then 'The People's Republic of South Yorkshire', now just another post-industrial regeneration site. BUT for those in the know in the garden and landscape world, a centre for good and wonderfully colourful ideas. 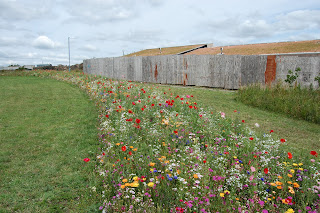 About 12 years ago Nigel Dunnett (know Professor) in the university Dept. of Landscape started working on annual seed mixes. The idea being to develop something which could be used by local councils to quickly and cheaply do something bright and uplifting, not just on roundabouts and parks but problem housing estates. These pictures were taken on the Manor and Castle Estates.
They have been very successful, and hugely morale-inspiring to the folk who live in what can be very forlorn areas. I'm not suggesting that passive enjoyment of beautiful flowers significently reduces the rate of car theft, drug taking and the other traditional local pastimes, but it may do something. Nigel's experience in talking to local people is that the flowers are a huge morale-booster. 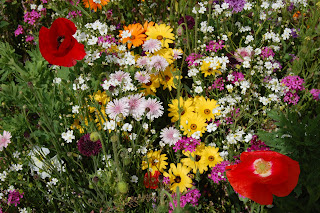 Actually, the annual flower mixes are part of a much larger package of environment-led community regeneration organised by Green Estates, a not-for-profit who sell the seed under the brand name of Pictorial Meadows. 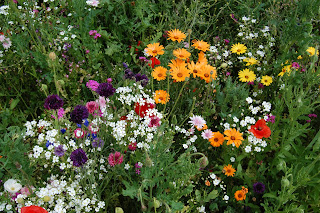 There are now about half a dozen different mixes, based on colour or height. Each one includes around a dozen species, which flowers in succession. From a March sowing, flowers can be expected from June/July through to November. 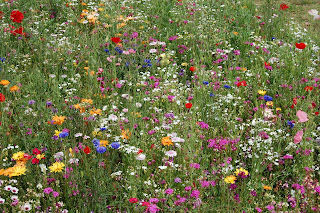 Annuals actually vary in how long they live, from 'ephemerals' like field poppies which are nine-day wonders to longer-lived species like Californian poppies which can flower for months, and well into the winter given mild weather. 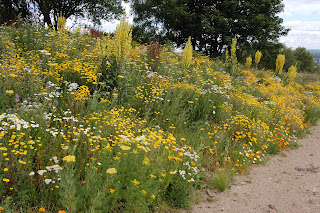 Nigel has also worked on perennial mixes, such as these, although they are slower to establish. 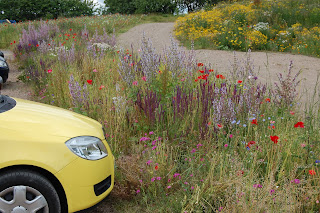 I had gone to Sheffield for  a flying visit with Amalia Robredo after a Gardens Illustrated tour of Berlin and eastern Germany. Amalia is a pioneer garden and landscape designer who works in the coastal area of Uruguay. She has recently published the first popular guide to wildflowers of the area, with a view to encouraging their use in landscaping, and planted the first locally-native green roof. Sheffield gave her lots of inspiration.
*********************
I am now publishing e-books through Amazon, for Kindle, smartphones, iPads etc. There are currently two available, both collections of writings for Hortus magazine, from the early 2000s. Click here for Amazon North America or Amazon UK.
Posted by Noel Kingsbury at 1:33 AM 6 comments:

About a month ago the leading flag on the ‘flag counter’ on my blog finally tipped from the Union Jack to the Stars and Stripes. So perhaps this is a good moment to reflect on Anglo-American relations in the garden. With the recent visit of Mr. Obama (who we Europeans by the way all adore) there has been yet another spate of politicians and commentators discussing the so-called ‘Special Relationship’. There certainly is one in gardening, and like the political version, it is complex, constantly changing, and sometimes controversial.
Read more ............
Posted by Noel Kingsbury at 1:20 PM No comments: