A window into the past 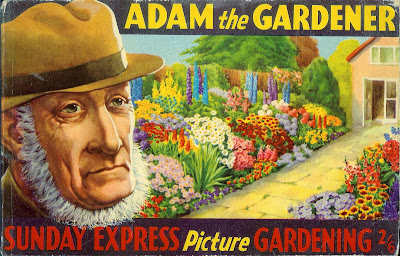 A friend gave me this for Christmas, a little book published in 1955, which includes a whole year's worth of a cartoon strip from the 1950s from The Sunday Express. The strip illustrates gardening operations for the week using this character - Adam, who must have been based on a real person I suspect. 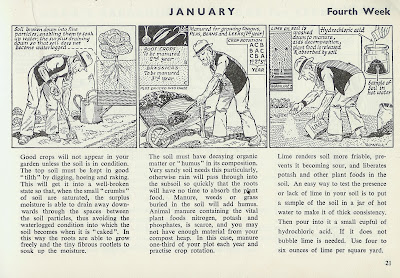 Adam, with the same set lugubrious expression on his face, unsmiling, sets about showing Express readers what to do. A lot is pretty advanced stuff, unthinkably so for a popular information sources on gardening today. On one page there is some material on grafting, going over crown, cleft, saddle and tongue. There is even a reference to grafting cacti!

Some of it leaves me with the feeling that there is nothing new under the sun. There are references to using herbs to keep insects away from other plants (saves having to douse them in DDT), to growing dandelions as a spring salad, and for using marigold flowers in salads. 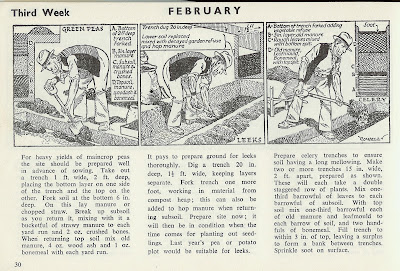 Express newspapers sold to the middle class and aspirational working class, i.e. people who could not afford a gardeners - unlike a lot of the folk who took The Times and The Daily Telegraph. Or the Observer, where the aristocratic Vita Sackville-West would boom on, her readers perhaps arranging a few pots, for their weekly help to actually plant. This is serious skills-based, craft gardening. It makes me think about just how many skills we have actually lost - an enormous amount of knowledge which once would have been much more widespread. So there are things we can learn from here. I liked the tip about digging up parsley roots in autumn and growing them on in pots in the greenhouse as a winter herb. There is far more knowledge here than you'd get from the bunch of dilettante lightweight presenters who currently grace our TV screens, or write columns for newspapers. There is no dumbing down; no fear of things being difficult. 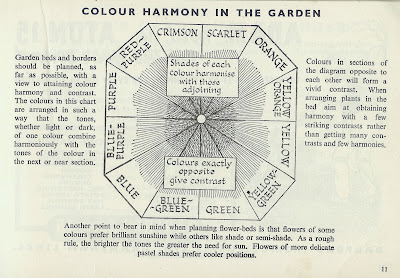 There is some additional material at the back, which does include some design stuff, such as this b/w rendition of the colour wheel. 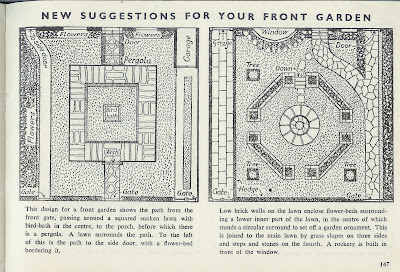 And some borders which show what aspirational gardeners might be making. By 1955 wartime rationing would have ended 3 years ago, so the food situation would have been getting better, and a lot of people would have been giving up their vegetable plots and wanting to make ornamental gardens again. The model is very much Arts and Crafts. 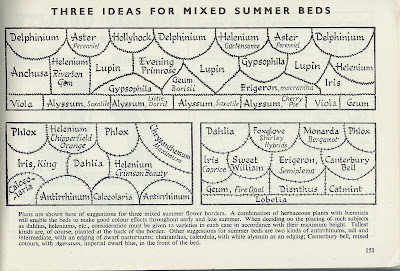 This looks so basic by today's standards. Plant availability was pretty low - something I shall be touching on in a future post. 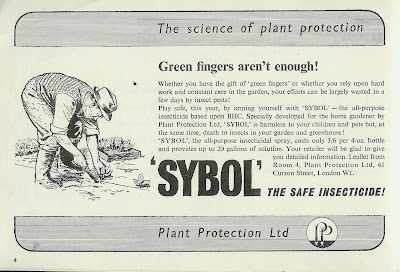 The 1950s was the high point of the chemical warfare approach to gardening. Notice the reference to 'the safe insecticide' - organochlorines like DDT were safe, compared to a lot of the mercury and arsenic based compounds that had been used before! In one strip Adam recommends using mercuric chloride as a wormkiller - apparently people didn't like worm casts ruining their velvety lawns! Another horror was a technique to encourage fruit trees to grow, by ring barking them on one side and painting with lead paint!

In some ways at least we have gotten wiser.
Posted by Noel Kingsbury at 11:44 PM 6 comments: