Berchigranges - still the most beautiful garden in the world. And it could be yours.... 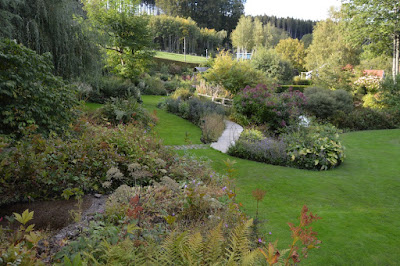 Three years ago, round about this time of year I visited le Jardin de Berchigranges, in the Vosges mountains of eastern France. At the time I remember saying (and committing to the blog) that this was the most beautiful garden I had ever been to. That's quite a rash thing to say, and rather untypical of me. So it was interesting to go again, and yes, I think it is, more so than ever. Berchigranges really is the most amazing garden and place. And whats' more – there is an opening here, for someone, or a couple. 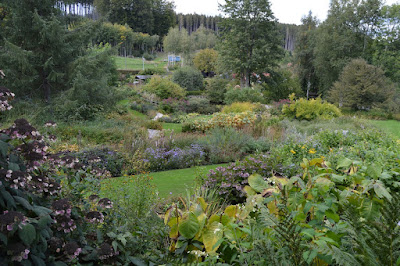 Monique et Thierry, who have made this remarkable place over the last twenty-odd years, are in their sixties and looking to slow down (eventually!) so they are hoping to find someone who will come and become involved and eventually take over, and they are prepared to give them a major stake in the property. Now that's a pretty incredible offer. One with huge potential for someone who wishes to commit themselves to a life of hard work in an incredibly beautiful but remote place. So pass the word around. 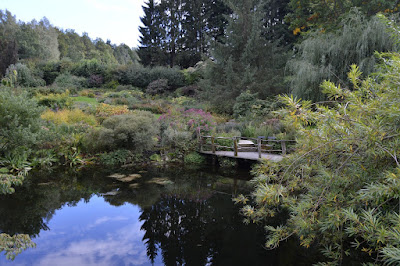 It is always difficult to pin down what makes a garden really special.

A Place Apart
The journey, up endlessly curving mountain roads through conifer forest, do help prepare one for something special. Once there, with views out from an almost amphitheatre type setting, you do feel that you have left the profane world behind and are somewhere special, almost enchanted. It feels pretty remote. It is.

An Experimental Garden
Monique kept on saying to me - “this is an experimental garden”. Innovation is what these two do incessantly. It is clearly second nature to them. Buildings, planting, land shaping, everything here is done to try something out. There is an unfamiliarity here, because there are so many things which I have never seen before: a long low sinuous building with a grass roof, a bridge with a hedge on either side, great retaining walls built of logs, a formal garden with wooden parqué flooring, a huge new meadow full of asters, silphiums and other prairie perennials, or simply familiar garden perennials used on a generous scale in a very naturalistic way. Yet it is a very gentle unfamiliarity – there is none of that desperate seeking after the contemporary in the self-conscious art-world way of say, the Chaumont garden festival.
Innovation
The level of innovation here is a strong reminder of just how un-innovative much garden-making is. Berchingranges feels everso subtly different to so many gardens, because the owners are just doing what they wanted to do, for themselves and probably don't actually care what other people think. (It is not for me to tell this story, but that of their meeting and subsequent passionate love affair has a similar quality). The trouble is with most garden-making is that most people care too much about what others think, as they try to impress, or to emulate, or to, and ohmygod I hate this, make an English garden. Why do people in France, in Germany or the USA endlessly try to make English ****** gardens? I'm sick of them. They all end up the same – as a pastel pastiche, while their owners obliviously live the cliché, almost wallowing in their inability to do anything actually creative. That there is no attempt to here to do that is one reason amongst many why this place is just so damm good (so there are not many roses). 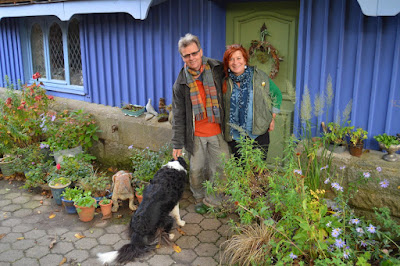 Monique is actually a huge Bloomsbury fan, but she doesn't waltz around with a big hat with a trug over her arm, pretending she is Vita Sackville-West. Her understanding of Bloomsbury is much more genuinely in the movement's spirit of bohemian experimentalism.

Going With What Works
One of the great things about Berchigranges is that M et T realise that a plant does well and then plant lots of it. This is nearly 700m in altitude and receiving up to 3000mm of rain a year, so conditions are a little different to many gardens and there are endless surprises. Actaeas do well, and so there is a whole great patch of their dancing white flower spikes. Euphorbia corollata (hardly seen in Britain) forms foaming white masses above increasingly fiery autumn colour. Clumps of Gentiana triflora, nearly a metre high, project an intense blueness on a lightly-shaded bank. A wall of 3m high Senecio canabinifolia marks the end of a meadow. 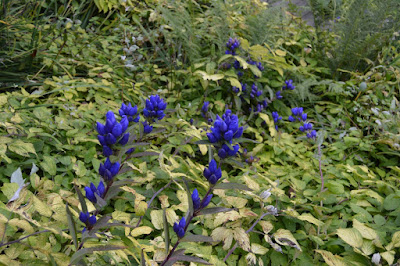 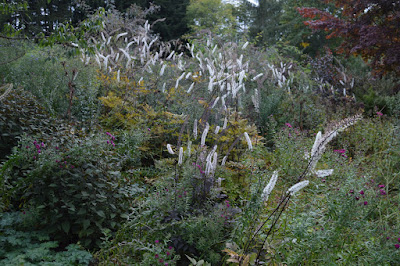 Creative Tension
This is a very naturalistic garden, with a huge amount of self-seeding and spreading going on, and sometimes a feeling that things in some places are just being left to get on with it. However there is always a clear edge and then the most immaculate lawns. When I was there, Thierry and two employees were busily raking off worm casts. Most of us 'new perennialists' (Dutch and British anyway) regard having a lawn with more clover/daisy/selfheal than grass almost as a badge of honour. But here the lawn is all grassy perfection. Thierry's first career was as a hairdresser apparently. It shows. They explain however that this is France, and in France if you plant wild you have to show that the wildness is intentional and the best way of doing this is frame all the wildness with a perfect lawn and perfectly trimmed edges.

Gardeners with a limitation of space tend to rework their plantings after a few years. Those with no such restriction tend to go on and develop new areas. This is not always a good thing, as there is the risk of them over-extending themselves; the previously planted areas meanwhile not receiving the rethinking and reworking they might benefit from. At Berchigranges, Monique et Thierry have moved on down the hill, but developing a progressively more naturalistic style as they do so. The latest development is the 'Bohemian meadow', asters and other (mostly daisy-family) plants in grass.

The older areas of the garden at the top have matured well, although there are places which I think could benefit from some rethinking – where one species has dominated for example. But what is interesting is to see how other species have successfully blended - I was particularly impressed by a narrow rose hedge, just like a mini version of a country hedgerow with perennials spreading along the base: brunnera, geranium, digitalis etc. This is particularly instructive at the edges of the borders where geraniums or persicaria-type species have spread to form a really solid edge, and kept trimmed back with a very clear lawn/boundary demarcation. Much of these plantings are incredibly full and dense, which must help with weed control. The edges of the plantings, Thierry explains, are trimmed every two weeks – sort of continuous pruning really. This stops the problem I have - of perennials falling over paths in rain. It does not work with everything (it would not work with monocots like hemerocallis or grasses, which only grow back from the base) but for geraniums, alchemilla, campanulas, persicarias, which can respond to a prune with growing more side-shoots and bush out, it helps develop a really dense edge. I'm going to try this at home this coming growing season – le nouvel régime Berchigranges.

SUPPORT THIS BLOG
I write this blog unpaid (of course) and try to do two postings a month, to try to provide the garden, wildflower and plant-loving community with information, inspiration and ideas. Keeping it coming is not always easy to fit into a busy working life. I would very much appreciate it if readers would 'chip in' (as we say in England) and provide a little financial support. After all, you pay for magazines and books, and it is only for historical reasons that the internet is free. Some money coming in will help me to improve quality and frequency, and to start to provide more coherent access to hard information, which I know is what a lot of you really want. So – please donate now!! You can do this through PayPal using email address: noelk57@gmail.com
Thank you!
And thank you too to the folk who have contributed so far.
********
Posted by Noel Kingsbury at 1:19 PM 3 comments: