Україна - teaching and enthusiasm in Kiev 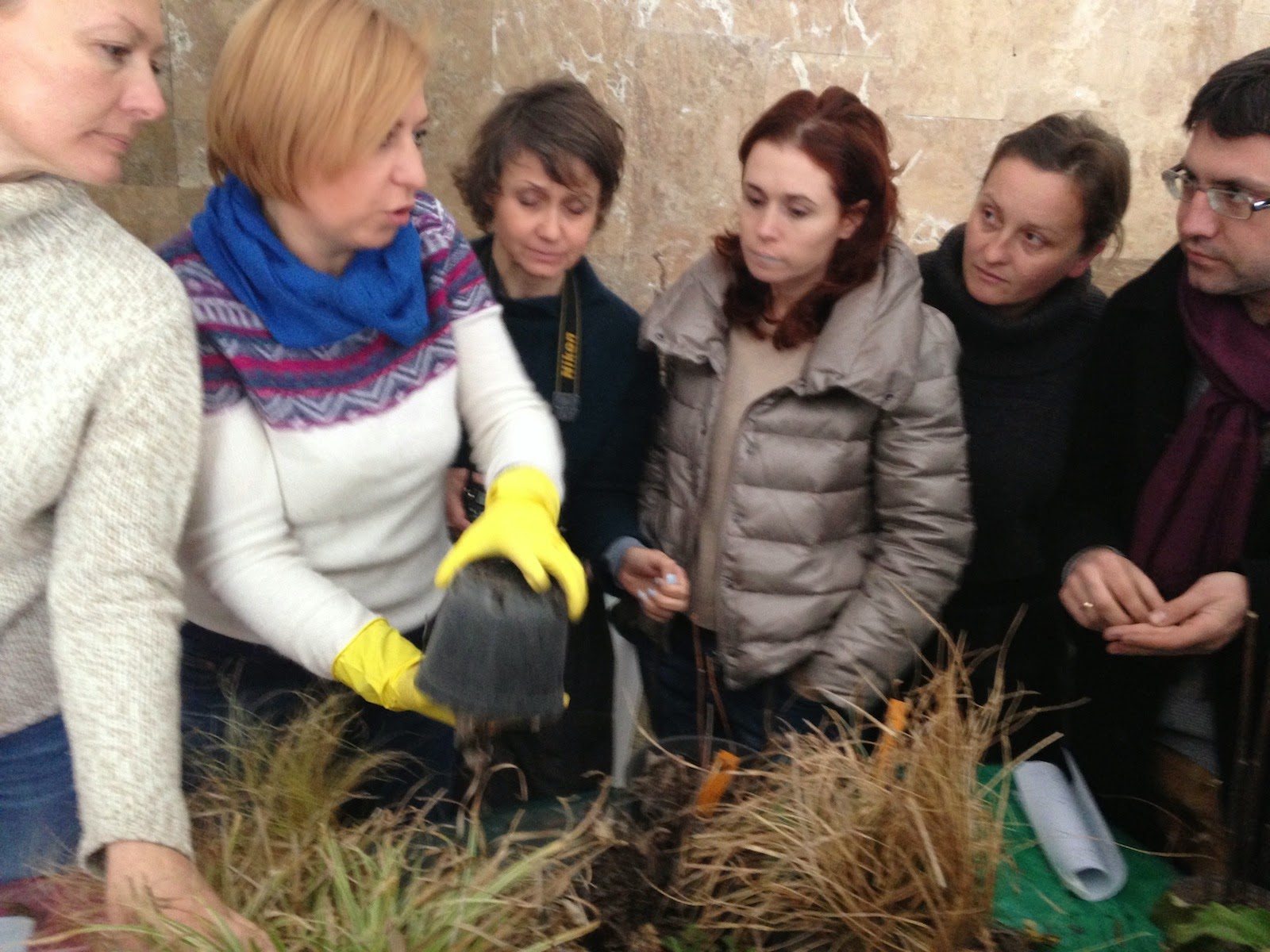 I was in Kiev, Ukraine, last week to teach a two day workshop on planting design. Such an amazingly enthusiastic group, as was my group in Moscow last year. There is an incredible thirst for information and knowledge; everything gets written down, every slide photographed. I get the feeling that this is basically a strong gardening culture (see my post on Russian dacha gardens) and people are desperate to make the most of what is now on offer. 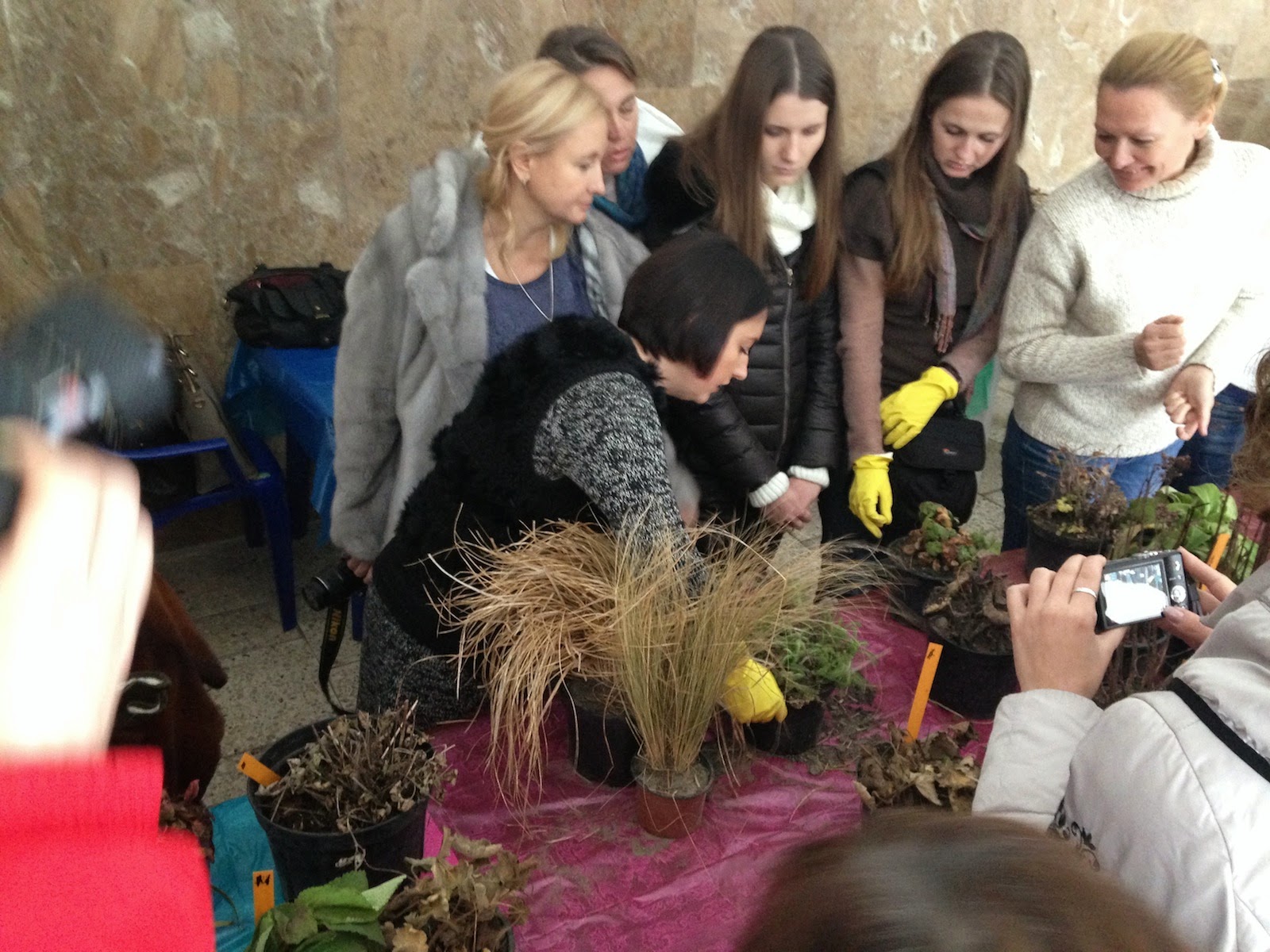 I insisted that we do some work with real plants. Going in the middle of the snowy winter is never my idea of the best time to visit anywhere, but there is still a lot you can learn from plants even when they are just sticks poking out of the pots. Victoria Manoylo, the organiser of the event managed to get together a very good selection of plants in 2litre pots for us to work with from a nursery. The students fell onto these plants with an eagerness I have never seen before. Usually people are quite cautious, with a few leading and others holding back. This lot were straight in there, picking up the pots, knocking plants out of them to look at the roots, and discussing eagerly. It was a teacher's joy to see! 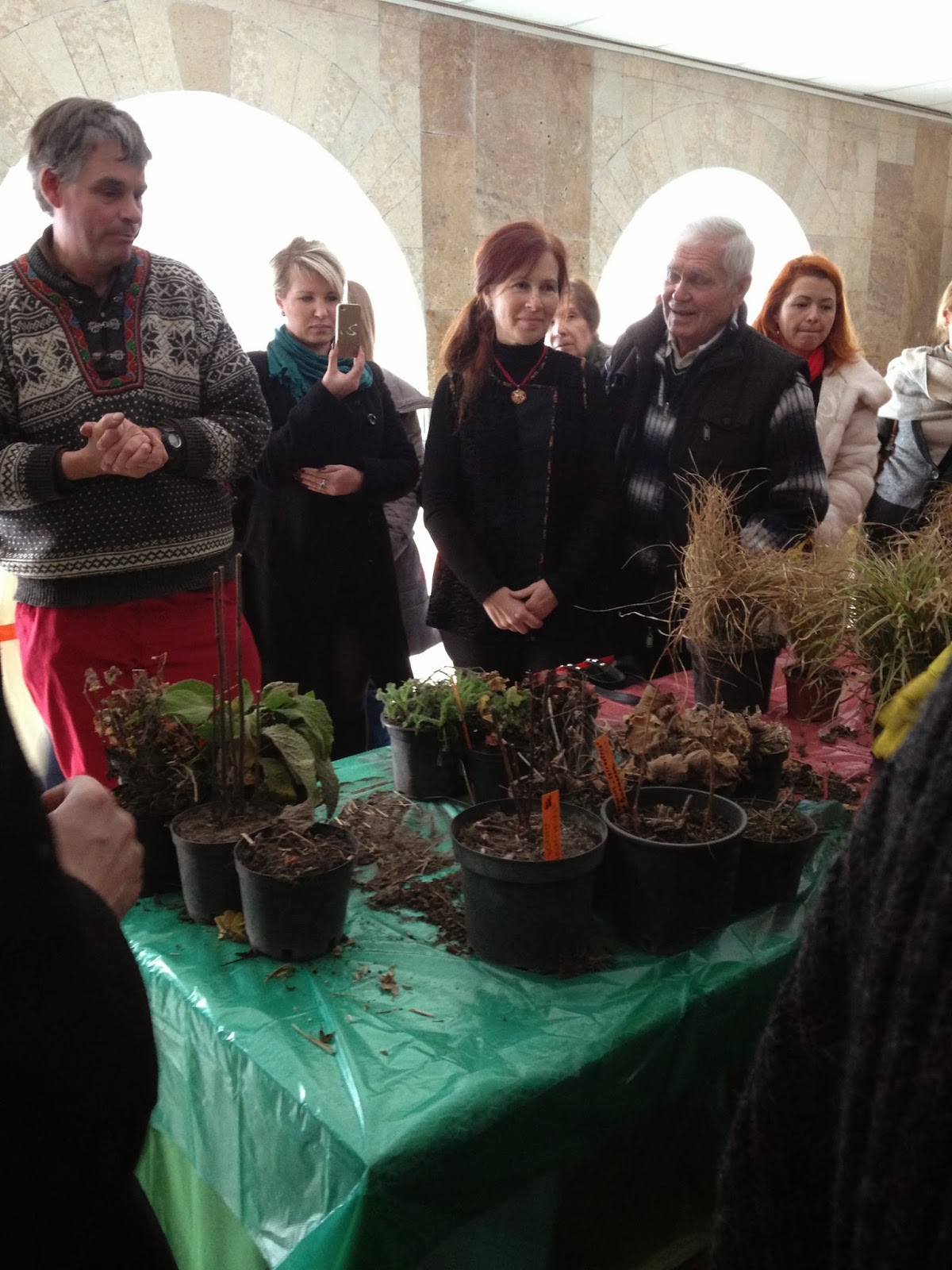 Great to be in such an appropriate venue – the botanical gardens (one of two in Kiev). We even got a tour around the glasshouses, impressive as they were relatively new ones, compared to the semi-derelict condition of many post-Soviet botanical institutions. Before I left I had been told some horror stories of previous British people going out to teach courses and being stuck in an old sanitorium complex miles out of town in a snowy waste with terrible food (sounded like an educational gulag). My experience was so much better, and the food and hospitality fantastic! 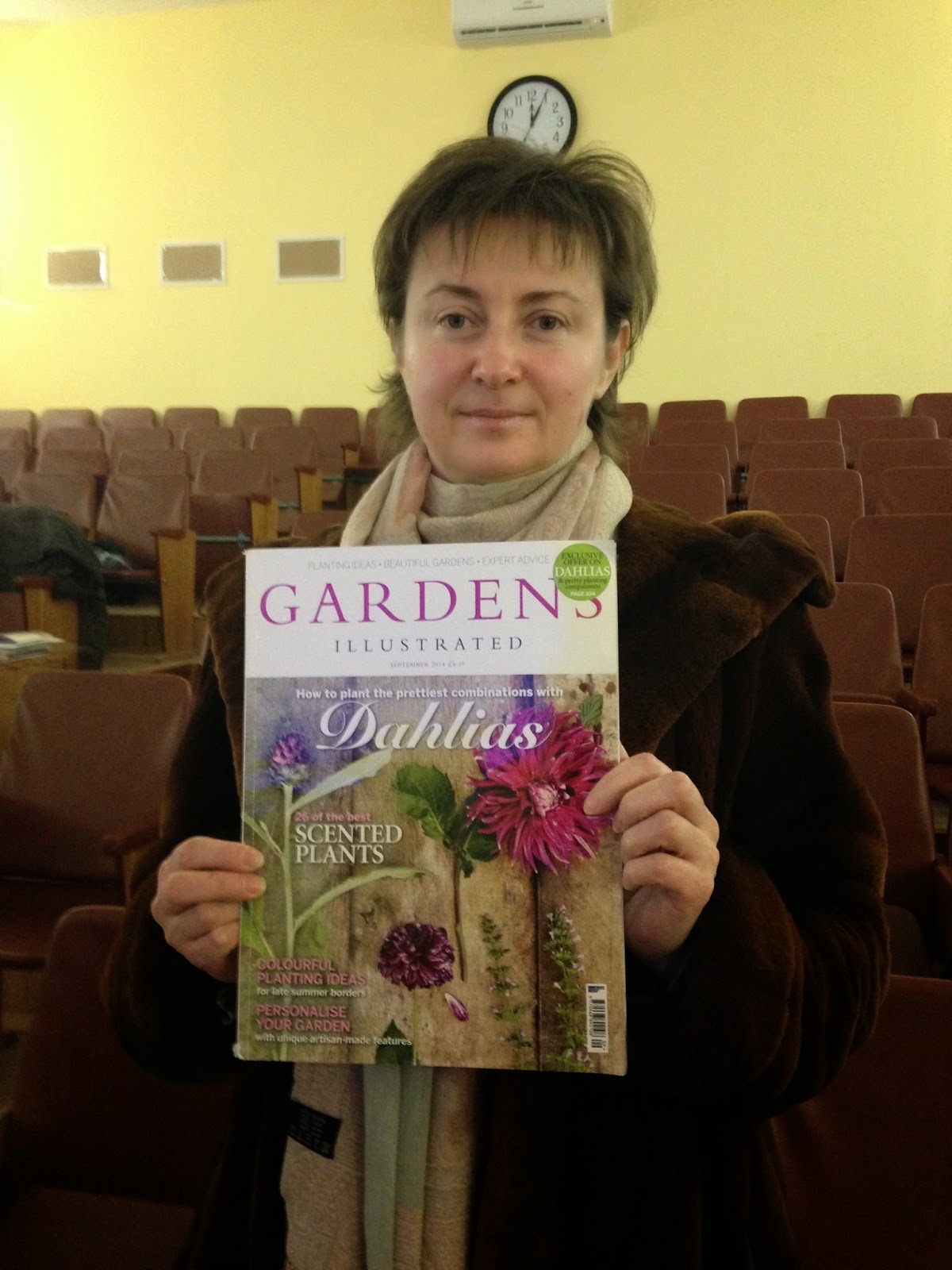 People had come from all over – so quite a bit of a challenge trying to keep things relevant, as the country is big and sweeps from the forested hills of the Carpathian mountains in the west, with which I am actually a bit familiar, from holidays in eastern Slovakia and Romania to the steppe, around Kharkiv in the east, beyond which is the territory Vladimar Putin is trying to slice off. Rainfall drops as you go east. 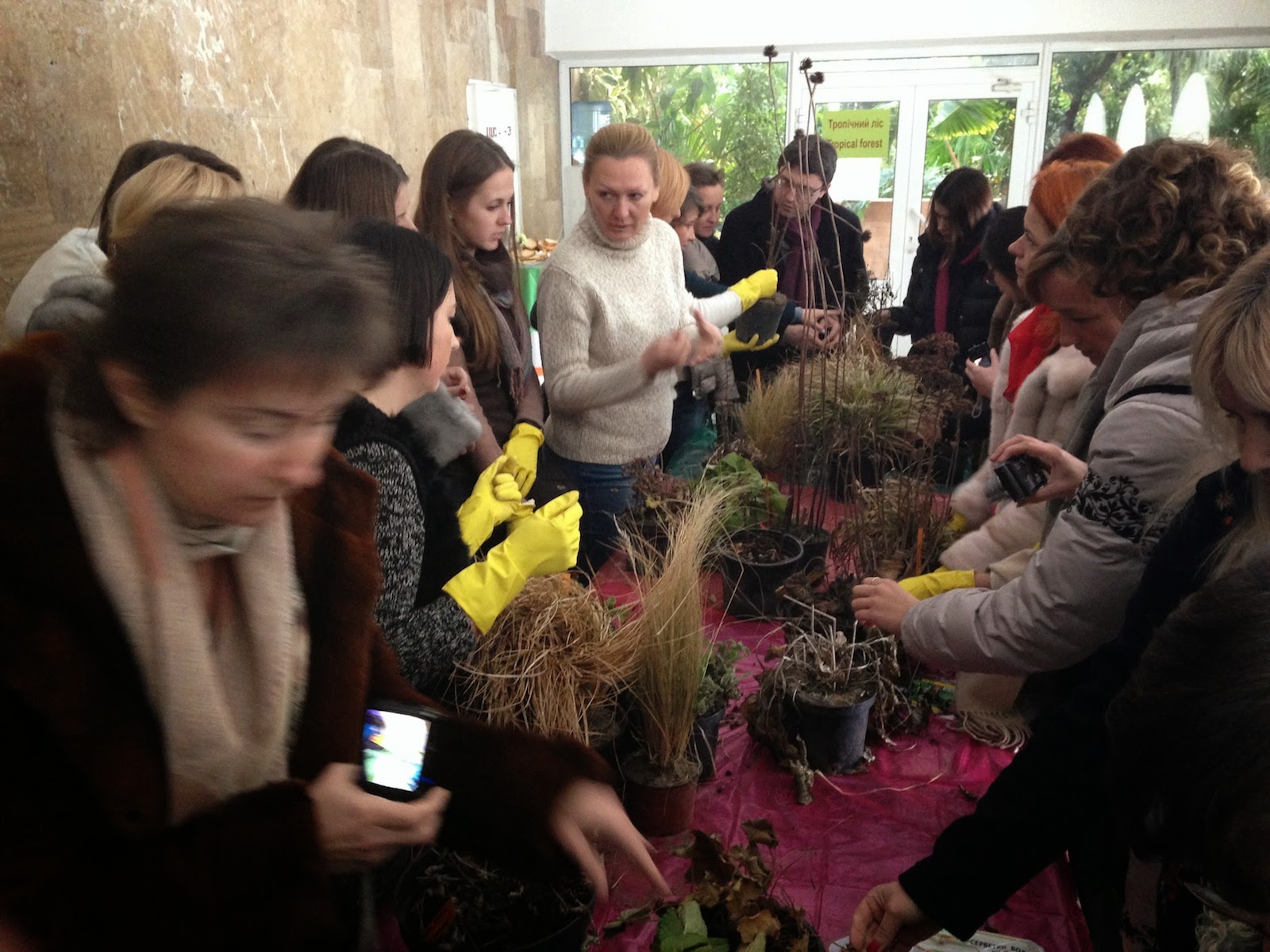 The conflict in the east inevitably hangs over several conversations. My conversation with Victoria in the ride from the shiny new airport soon turns to a conflict which is dividing nations who she said are “like brother and sister”. Others say how they have family in Russia, but feel afraid to go there now, while Russians don't feel comfortable visiting Ukraine any more. Its nothing about ethnicity. Everyone speaks a common language, or culture. It's political – Russia has always been divided between facing Europe and modernising or turning inward into a regressive 'Oriental despotism', and of course intimately linked to Putin's political machinations. Ukraine has always been more European in its identity – they had one of the world's first democratic constitutions back in the early 18th century, before being swallowed up by the Tsars. It is frightening to see how quickly close communities can be torn apart. Very frightening in the context of Scotland. Not that David Cameron is going to smuggle tanks over the border.

Visiting the Maidan, the site of the demonstrations back last winter was a very special and moving event. What was particularly strange was seeing the location of where there was a massacre of demonstrators by hidden snipers – just outside an upmarket shopping mall with a branch of Lagerfeld and Swarwovski. Almost surreal juxtaposition.

It does feel as if garden making and quality landscape design are part of the modernising project in this part of the world, and yet one which is also deeply culturally rooted. Not that landscape design under communism was necessarily bad, but it had little variety or quality, let along creativity - vast numbers of the same generalist species were used. A new era, with nurseries, some of them innovative in their plant range, and real creativity amongst the design profession, is all part of a new and more outward looking and more global culture. Perhaps this is part of the explanation of the incredible enthusiasm and commitment that Ukrainian and Russian garden people have. 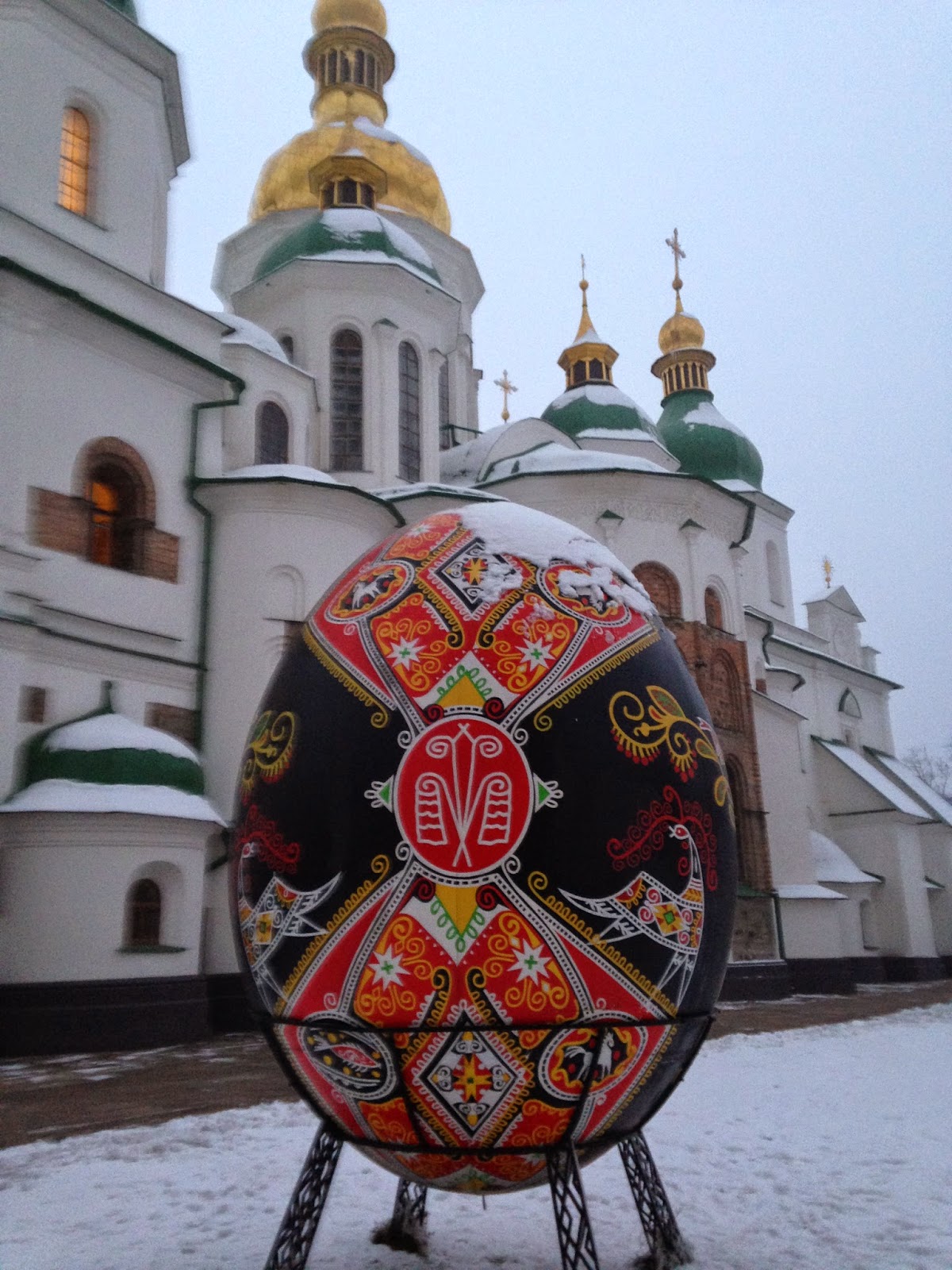