The Garden at Montpelier Cottage in May 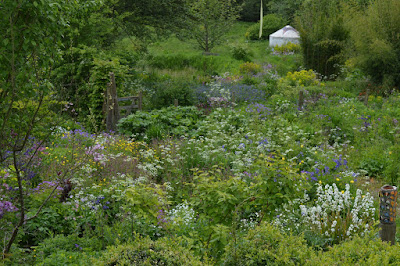 The garden in May. I'm pretty happy with it now. We have been here ten years and things are coming along nicely. This May in particular has been good, and to a large extent I feel the plants have done the work for me. I have seen a couple of public projects lately by colleagues and been astonished how little there is in flower in them, which strikes me as odd when there are so many perennials which flower at this time; many are quite physically insubstantial, which means that they can then disappear amongst taller bulkier later-flowering plants. Or they are semi-summer-dormant, which is neat as they can then literally be left to disappear beneath later-developing plants.

Actually, before I go on, the pictures here do not come across well, so I have uploaded them on to flickr as well - they give you a much better idea.

This is the view down from the house, towards our yurt which always makes a good focal point for photographs. A lot of what you see in terms of visual impact now is stuff that has put itself there, notably the wild Anthriscus sylvestris and forms of Aquilegia vulgaris. Increasingly this garden is about managing self-sowing. The visual impact is also about having a limited number of species widely distributed, which is also one of the advantages of seeding - as the plants do the work for you. 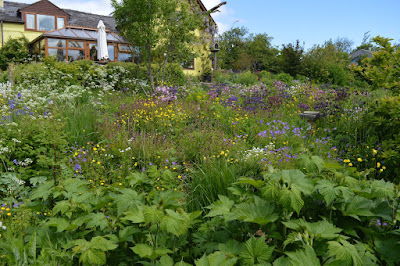 The big leaves in front are Filipendula camtschatica, which does very well for us on our moist soil. The foliage makes a good graphic counterpoint to all the fine textured species. It is good at all times, so much so that we left this clump standing after we had cut everything else back in the winter. It seeds a little bit, and since it forms very solid clumps, definitely something to keep an eye on in the future. 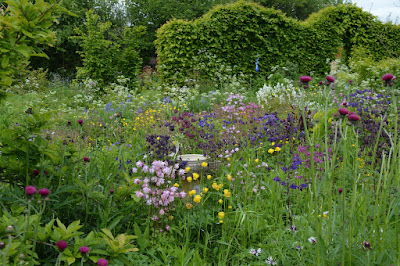 Aquilegias with Cirsium rivulare atrosanguineum to the lower left and right and our hornbeam hedge, which is trimmed to look vaguely like it might be a ruined wall. I like minimal bits of architectural shaping, just enough to give some substance to the garden. 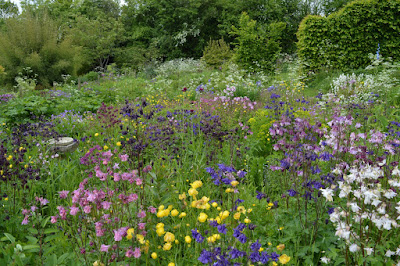 The yellow is Trollius europaeus, which has proved one of our most successful species; we are in the region where it does grow wild, and these are all grown from wild-collected seed. It is the kind of thing which simply does not flourish in many places as it gets too dry but here flowers for weeks with great big fat flowers, vaguely reminiscent of buttercups; it as the great advantage of completing most of its growth now so it does not mind being swamped by other things later on.

The aquilegias are remarkable. Originally from seed from Jelitto, they continually seed and spread, and with a continued ability to produce a very wide range of colours, as well as occasional doubles. So often a seed strain ends up going back to a murky version of the wild plant, but not these, they almost get better and better in terms of genetic variation. 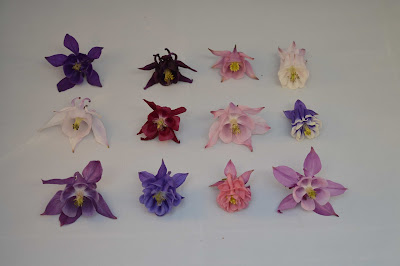 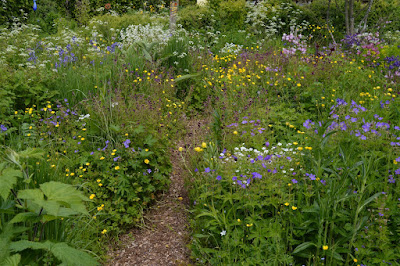 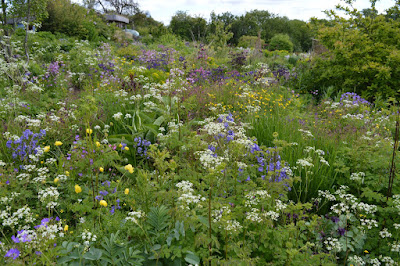 The cow parsley (the Anthriscus) is a wild species which is basically a winter annual, flowering May/June and then seeding, so we pull most of it out to stop it seeding too much. It makes a great visual linking plant, separating brighter colours and preventing 'clashes'. The blue is mostly Geranium sylvaticum, which seeds modestly. The wild buttercup (Ranunculus acris) is a good ingredient too, although it can seed too much. Also some Polemonium caeruleum which hopefully will spread with time. 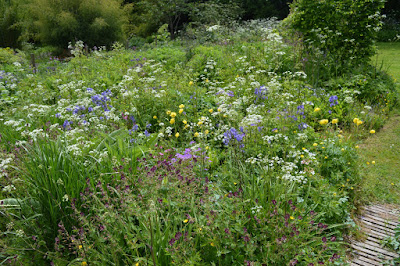 Geranium x monacense in front, one of the G. phaeum hybrids - all good plants for this time of year, murky colours but fascinating and a good complement to stronger colours. Unlike the slightly later pink G. endressii types they do not form enormous clumps which collapse after flowering, which is an advantage, making it easier to mix them in with other plants. 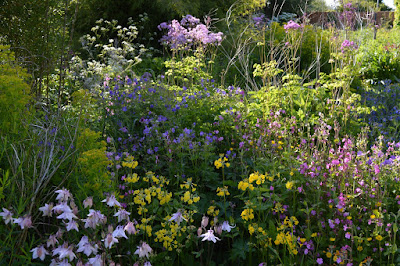 Our native red campion (Silene dioica) here as well, on the left, a short-lived perennial, which seeds strongly once established, and another winter annual, which is semi-dormant after it seeds in June. Again this is something which can just be left to get covered over by later-developing plants. The yellow here is Primula helodoxa, one of the Himalayan candelabra primulas. It does ok but has not started seeding yet as it has in many moist soil gardens. Thalictrum aquilegifolium too, in the background, which is good for height, as there is little else which flowers at this height at this time; it too can be forgotten about after flowering as it has so little bulk. 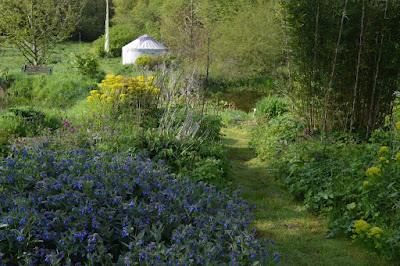 Symphytum caucasicum. A very aggressive spreader which is in its own bed, which gets mown around. It is a fantastic bee plant, for wild bumble bees rather than honey bees. In less fertile soils it struggles. 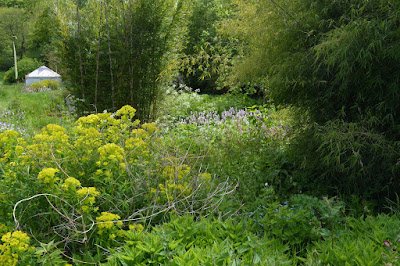 Euphorbia palustris with some of its last-year dead growth left, which we do deliberately, as it forms a kind of stiff cage inside which the very soft new growth develops and is supported - one of those things which makes you say "isn't nature clever?". This is a seriously large plant but appears not to spread, it is not actually clonal but seems very long-lived. It can seed and since it gets so big this is something which has to be watched. 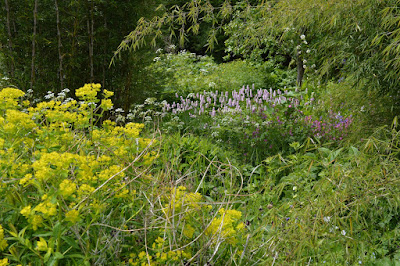 Persicaria bistorta 'Superba' in the background here.  Between clumps of bamboo, which are almost the only evergreens here. They have a softness so often lacking in evergreen shrubs and fit into the landscape better. 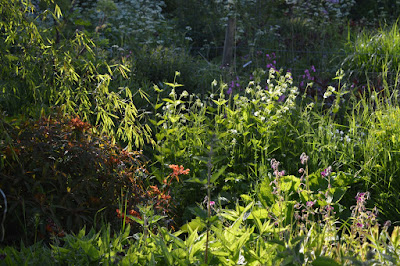 Euphorbia griffithii on the left and in the centre, Silene fimbriata, which has fascinating fringed flowers and is a surprisingly good perennial for a silene (they are usually short-lived like our wild campion species), forming big clumps with time. A good plant for back-lighting.

SUPPORT THIS BLOG
I write this blog unpaid (of course) and try to do two postings a month, to try to provide the garden, wildflower and plant-loving community with information, inspiration and ideas. Keeping it coming is not always easy to fit into a busy working life. I would very much appreciate it if readers would 'chip in' (as we say in England) and provide a little financial support. After all, you pay for magazines and books, and it is only for historical reasons that the internet is free. Some money coming in will help me to improve quality and frequency, and to start to provide more coherent access to hard information, which I know is what a lot of you really want. So – please donate now!! You can do this through PayPal using email address: noelk57@gmail.com
Thank you!
And thank you too to the folk who have contributed so far.
********
Posted by Noel Kingsbury at 11:31 PM 7 comments: