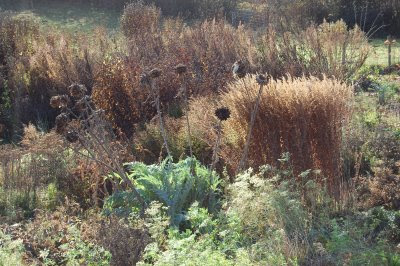 Globe artichoke making new growth NOW! adding a touch of life to an otherwise wintery scene. Solidago rugosa to the right standing well. The first stages of a prairie planting behind - actually part of a septic soakaway scheme - same idea as a reedbed, soaking up nutrients. 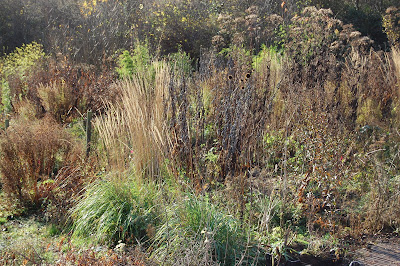 Grasses (mostly Calamagrostis 'Karl Foerster' and perennials in November sunlight. Anything which has collapsed into a soggy mess by now has been cleared away - leaving things which should stand a few months more. I'm re-organising and re-planting around these surviving stems - so much easier working around landmarks than a site cleared of all above-ground growth, especially since these are all the good long-season structural elements.

Posted by Noel Kingsbury at 4:16 AM

I've just followed your link from another blog - the pic caught eye! I do enjoy finding new blogs. However, it was a quite surprise to find your name at the bottom of this posting! I didn't look at the side bar I was too interested in the photos :-D

I have ‘New Perennial Garden’ and ‘Designing with Plants’ on my bookshelf. I would like to thank-you for inspiring so many gardeners with your planting schemes. I love them – If only I had a field ;-D

Thanks for sharing your garden images (some aren’t showing BTW). What a delight to discover them this morning :-D

Looking good! The new silvery leaves of the globe artichoke are a bonus, I agree, and grasses look great too at this time of year.

I've never winter cleaned my garden. Of course, plants that have turned into soggy messes are cleaned up, but the rest I leave. Come spring my garden is teeming with ladybugs who will help me to get rid of the first batch of aphids. And during winter my garden is visited by many birds, happy to find something to eat.