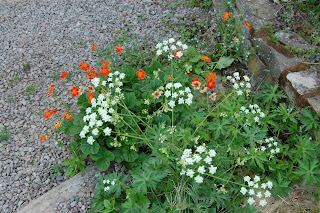 This year’s Chelsea Flower Show seemed to mark a return to horticulture, rather a relief after the show becoming increasingly dominated by sculptural assemblages (I’m trying to be polite here) or flocks of statuary. A lot of the gardens were just well planted, with a refreshing lack of pretentiousness. Andy Sturgeon’s winning Mediterranean Garden (for The Daily Telegraph) was a model of all that is best about British garden design – the classic balance between strong structures and exuberant planting – but all in a very contemporary style.
No cow parsley though. I’d like to put in a bid to do a cow parsley garden. Queen Anne’s Lace to American readers (I think). This cream-white flowered umbelliferous plant dominates a vast proportion of British roadsides, seemingly able to compete with the grasses which, fed on nitrogen pollution, more or less suffocate the rest of our limited wildflower flora. In my last garden, I conducted an experiment in letting it seed one year, and then controlling by pulling up after flowering. It worked, in that I got a respectable amount of cow parsley but without it competing with anything else. So, now I’m repeating the experiment here.
What I like about cow-parsley is the delicate flowers and, because it is such a common element of the British countryside, brings the landscape into the garden. The colour is also a buffer, toning down and blending the brighter colours of border plants. In theory I’d be quite happy for the stuff to distribute itself  around the garden, but only if it isn’t going to become a weed and out-compete my border plants.
Cow parsley (Anthriscus sylvestris) is a biennial which survives year to year by seeding and apparently (though I have not verified this myself) by the production of bulbils at the base of the plant. It has a very narrow profile, doesn’t spread sideways or sprawl about, and dies from July onwards. Not something which could become a major problem then, and its reproduction can be controlled by pulling out before it seeds. Welcome to the naturalistic border!
Posted by Noel Kingsbury at 2:31 AM

The Chelsea plantings were wonderful this year. Can never have enough umbellifers. The QAL hasn't been happy in zone 10, but Orlaya grandiflora is a good choice here. Have made notes to look for Prostanthera cuneata from Chelsea, which was written up quite a lot. P. rotundifolium is a good shrub here too. Thanks for the Chelsea report.

Umm, p.s.
I grow Anthriscus sylvestris 'Ravenswing' and rather amazingly, an original plant survives year after year, generally when I clip the flowers to try to preserve the energy. But it's blooming now (began while in England) and I can't bring myself to cut off the flowering stalks. It has gorgeous dark foliage, perhaps you know it? I always though it would die quickly, but it has been around for years. And ... it even self sows in other parts of my garden, with the same dark foliage, rather than reverting.

Just a passing comment. I think the name Queen Anne's Lace is rather universally applied in the U.S. to Daucus carota.