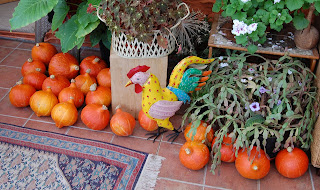 I got invited to an interesting meeting the other week, a gathering at the Royal Horticultural Society garden at Wisley to take part in a ten-year re-evaluation of the plant trials system. An interesting gathering – felt good to be amongst so many people who just know so much stuff, mostly members of one RHS committee or other, and a few from the nursery trade. I think I was the only one there who didn’t fit into either category. Felt a bit like I’d joined the grown-ups.
The RHS awards an ‘Award of Garden Merit’ to plants which it deems “outstanding excellence for ordinary garden decoration or use” after subjecting them to a trial – usually at the Wisley garden. The AGM’s credibility tends to decline the further away from Wisley you go – which is perhaps not entirely fair, as a lot of the characteristics for which something gets the AGM are genetically-determined factors, which will show up wherever the plant is hardy enough to survive. Actually, life beyond Planet Surrey is recognised - to answer an obvious question – a hardiness rating is integral to an AGM award.
As part of some research I did earlier in the year (of which more later in a future blog) I did a comparison between the very different RHS and German systems. They are actually very different, with different objectives; there’s more money for trialling in Germany  I think – how else could you trial something in 14 different places (which include Switzerland and Austria), and the German system is not aimed at an award but a grading (3 stars, 2 stars, 1 star, “for collectors” (i.e. second rate plants for nerds) and then a final grading which I understood to be a polite way of “to the compost heap”. I liked the objective set of criteria which was used to judge the plants in Germany, and was rather puzzled by the lack of anything like this for the RHS system. A certain amount of prejudice as well perhaps – visions of RHS committees of blazer-clad old buffers voting in a post-Jolly Good Lunch stupor are, to be honest, rather a thing of the past. The RHS system seems to be entirely relative, but the reports are thorough and are in fact the very best sources of information on garden plants available.
So there we go. Invigorating to be amongst so many experts, and to have our opinions really respected. Let’s see if this  actually very useful system can be fine-tuned and made even more useful.
Pic above by the way is of ‘Uchiki Kuri’, a Japanese winter squash, a group which does not appear yet to have been trialled; bred on Hokkaido and at 150m up in the Welsh borders the only squash worth growing. Its flavour is also really good  - I suspect its dry matter content is higher than any of the others. 21 fruit from 8 plants and more to come.
Posted by Noel Kingsbury at 11:54 AM