“Grrrt lush!” – exotic fruit in the west of England. 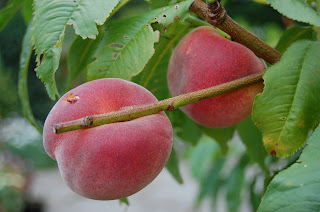 Peaches and apricots at 52 degrees north and 167m (547ft) in the English/Welsh borders is pretty good going. Nothing to do with global warming or microclimate, although they are on the south wall of the house, and all to do with good modern plant breeding.
The peach we’ve had for four years; its fruited for three of those, and we were up to 24 this year. Good juicy flavourful peaches, far better than anything you can buy in the shops. Its name ‘Avalon Pride’ made me think it must have been bred somewhere near Glastonbury in Somerset, which of course would meant that it is a “grrrt lush” variety in the local lingo. But it turns out to be from the Seattle area, and a more or less accidental discovery, a seedling which appeared to be totally resistant to the peach leaf curl disease which devastates peaches, especially in cold wet winter climate zones like ours. It turned out to be very hardy too, although hardiness is not really the issue with peaches, rather that they flower very early, and the young fruit are easily caught by later frosts. They are so pretty in bloom that they are almost worth growing for their flowers alone. 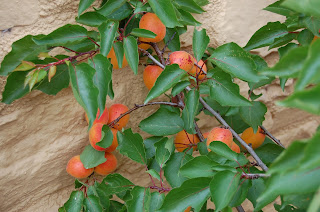 The apricot was even more of a surprise. I bought it from DT Brown, a mail-order vegetable seed company. It arrived, very crudely pruned, and it went into soil at the base of our home’s massive mid 18th century chimney stack – its not good soil at all, so we’ll have to try to improve it with compost mulching from now on. No expectations of any apricots. Actually we aren’t great apricot fans, they often seem to taste rather astringent, or maybe that’s just European ones. The best apricots I’ve had are the dry ‘white’ ones you can get in the Hunza valley in northern Pakistan, mysteriously completely unlike the little round balls sold as Hunza apricots in wholefood shops here.
Apricots are very hardy. Very. Winter in northern Pak at 3000m is very very cold, but once it’s spring it doesn’t freeze. So the locals of the Hunza and neighbouring valleys grew family apricot trees – that’s family as in several different varieties on each tree. Dried on rooftops during the intensely hot and dry summer, they would be eaten as a staple diet for the rest of the year. Imagine living on apricot porridge for breakfast, dinner and tea, with a bit of barley thrown in for excitement.
Again, the problem for us as apricot growers is that the young fruit gets caught by late frosts. However our variety ‘Flavourcot’ and its sister ‘Tomcot’ have been bred in New Zealand to flower a little later and so reduce the frost risk. To our astonishment this year we harvested thirty fruit, deliciously juicy and without much astringency. Actually they really were the nicest apricots I have ever tasted. Since then I have heard of someone in nearby Gloucestershire planting a commercial orchard of –cot type varieties.
I wonder what other surprises the future might bring. British bananas are a theoretical possibility. Anyone who knew us at our last house would have been familiar with the vast Musa basjoo in the backgarden. I had planted it when Jo was away teaching for two years in Bratislava (1993) and it just grew and grew in its sheltered inner-city Bristol, cat-shit fed, environment. Every year we would hack bits off for people. Last winter (minus 12) killed it to ground level, but the tenants in the house reported that by May it was sprouting again.
Musa basjoo is a higher altitude south Chinese species, with inedible fruit full of bullet hard seeds. The fruit is also produced very late as it flowers late in cool British summers. Even with conventional breeding techniques I reckon it might be possible to start on the path to a variety which had small edible fruit by late autumn in southern Britain, or certainly in the warmer summers of central Europe.
Roll on modern plant breeding!

Posted by Noel Kingsbury at 1:08 PM

Wow growing fruit like this that far north is amazing. There is nothing like the taste of your own produce.

It somehow tastes a bit nicer grown yourself and gives you a bit of a smile whilst you are eating it.

I live near Brizzul at the moment, and although I don't actually have a Brizzul accent myself, I always spelled the phrase "Gurt lush!"

Thass just me though, I do like your way of spelling it.

And it's probably right anyway.

Hi, I was looking up Hunza apricot care and found your Blog! I live in Chepstow and have a 7 year old Hunza which I am very proud of because I grew it from a Wholefood shop apricot Pip! I put it in the freezer for a while , then hit it with a small hammer to split the stone and £ of them germinated.2 trees I gave away and 1 came with me here 3 years ago, when I moved from Cirencester; and it is thriving.I estimate it is about 7 years old and I wanted to ask you when you think it might blossom? No sign of any yet.
Fascinating to read about your knowledge of apricots.
In anticipation,
Averil Davies