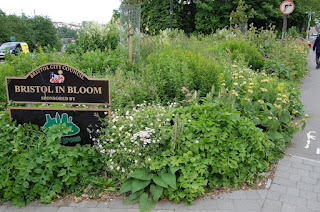 **********
Have you read the unique soap opera for gardeners – Dig, Plant and Bitch. Recently described by a colleague as 'Jilly Cooper meets Geoff Hamilton' (translation for non-Brits: sharp-nailed chicklit crossed with gardening advice from favourite uncle).
Posted by Noel Kingsbury at 10:11 PM

I have been doing the same in a green patch of formerly mown grass on a roundabout in Sheffield. Designed and planted it up (with no soil remediation) two years' ago. I have used some of the species that you have e.g. Phlomis russeliana. Some ruderal perennials have arrived as well (such as fennel) which have been welcomed. The weed suppression of the selected plants has proved excellent. We (volunteers) weed and cut down flowering stems once annually (late winter/early spring).

It would not be an exaggeration to say that the public LOVE it.
Geranium 'Claridge Druce' is a thug. Never use it is my motto!
Marian Tylecote

Looks great! I grew up in Bristol (near Bedminster) and must go back to see your plantings. Now in Stirling - the Council is replacing some bedding with edibles and wildflower seeds but I'm trying to encourage them to use perennials too. Thanks for the inspiration!

You have certainly beautified your city! I'm thinking about what little I can do along our country lane :-)

Unfortunately dig, plant, bitch is only available in the U.K. Oh well, I'm distracted enough as it is I guess!

Nice to read the term "socialism" in a piece on gardening...doesn't crop up too often in Gardens Illustrated. This and your other post on privacy and greed capture what a depressingly class-ridden field gardening is in the UK.

You Brits surely have a different definition of "no maintenance". No doubt your selection of plants was superb, but I bet there were neighbors in the night who did some tidy work to help out public maintenance crew.
Or perhaps, as I have long suspected, garden plants in GS have some sort of modified dna that allow them to thrive anywhere...

Like Marian I too have been involved in planting a (different) public area in Sheffield on very thin soil and infrequent maintenance by volunteers. Successes have been Eryngiums, Verbena bonariensis, Sedum Matrona, Rudbeckias and Stipas. Less successful have been Heleniums which despite being stunning in the first year, really suffered in a very dry summer last year. Locals have been very complimentary even asking for names and suppliers of plants.

Noel.
I noted these planting by reading a variety of journals for the landscape industry. Yes, they make positive sense especially when local authority parks want bedding in areas where there is no water supply e.g a roundabout. We need varied and dynamic bedding in our public realm but we must not banish or disrespect bedding. My thoughts are working in the landscape management industry are yep a little less bedding, more drought tolerant bedding, diverse at that and some of the plantings you have shown here. Show some more pics if you have some.

Totally brilliant Noel. Those planting areas are just my thang (Canadian!) Amenity Horticulture, you cannot beat it, and done well, as you so clearly do, what a difference to society it makes. I used to go to the seminars at Sheffield and listen to everything 'The Man' said about meadows and turning Industrial sites into landscape that changes everything. You know this whole thing has started up again in me now, along with adapting to climate changes, there will never be a dull moment again. I am going to have to check out the soap opera....hmm I'll do that now. Great read and Great Job you have done there on those areas of planting.

Thank you SO much for these beds around my city. Infact just today my mum commented on the Three Lamps and Oxford St and how amazing they're looking. Well done sir!

The plantings look great! What an positive reflection on the original plant choices.

I'm a big fan of these kinds of plantings in city settings- I'm seeing it done a bit more here in the U.S. -- opportunities abound.

Many of the public pocket plantings in my small mountain city are maintained by volunteers, both freelance and through a local non-profit (Asheville GreenWorks).