Tony Avent's Plant Delights Nursery near Raleigh in North Carolina is legendary. 20,000 plus taxa. Primarily for the huge range of plants of course, but also for its display garden, its whacky sculpture and provocative, hate-mail-generating cartoon catalogue covers. Plant Delights shows that it is possible to stand out againt the herd and run a successful business selling a huge range of plants, many of them distinctly slow to grow.
Organisation is key here; everything is incredibly tidy, and very well-labelled. With an emphasis on woodland species, you can wander around, see and photograph more new plants in a couple of hours than many would believe possible. Researchers get involved too – for them the meticulously labelled clumps of innumerable geographic and other forms of plants are perfect material.


“I'm very keen on ex situ conservation” says Tony, “although everyone bangs on about conserving plants in their place”. He has a point, habitat destruction can wipe out a rare variant of a species out overnight, but well-labelled collections in a protected location like this, will ensure survival. What's more, the public display of such a vast array of biodiversity is powerfully educational in its own right. 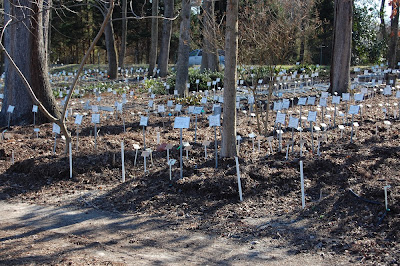 The soil here is very sandy, very acid, and was stripped of its nutrients by a century plus of tobacco farming (this is the greediest of crops). Wood mulch is used for the paths, and as it rots it gets shovelled onto borders, so steadily building up the humus content. Apart from some berms of imported soil and gravel, largely used for dry habitat plants, little effort is made to provide special soil conditions for plants; Tony is adamant that one size pretty well fits all here, he stabs a finger at an agave sitting next to an azalea on one of the berms to prove the point.

The whole, ten acre plus, site is managed as a rain garden, so as little water is allowed to run off as possible, and all water from the greenhouses (the only environment in which synthetic fertilizers are used) is cleaned by running through beds of wetland vegetation. 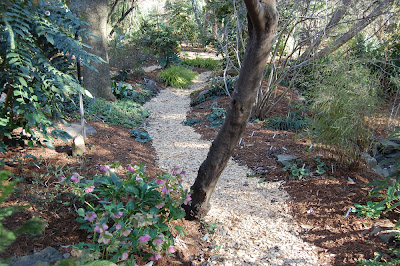 Natural biodiversity may be the central passion, but Tony also oversees a number of breeding programmes to improve the plants available to gardeners; primarily with Epimedium, Baptisia and Hellebore. “With hellebores” he says, “we practice redneck breeding, just putting together groups of plants we want to cross, isolated from others, and let the bees get on with it.”

I can't wait to get back at another time of year.

Episode Seven of Dig, Plant and Bitch, the world's only soap opera for gardeners is now available.
Iris stakes her claim
For years, Iris and Johnny Dalton have rather treated the almost-abandoned walled garden at Mere Castle as their own territory. Now aware that the Watkins-Smythes are thinking of renting it out, Iris decides to take matters into her own hands. Elsewhere, garden designer Sebastian Gilling-Jones is discovering that being a TV gardening personality pays a heavy price; nurseryman James Treasby increasingly feels like he is running a remedial class in basic horticulture, the Watkins-Smythes and their rivals, Wayne and Petunia Martin are playing a war of nerves over supplies of cakes for their respective tea-rooms, while Petunia makes a discovery that might be good news for local connoisseur gardeners, but will not be welcomed at Treasby’s Plants of Distinction.
Posted by Noel Kingsbury at 11:41 AM

This truly looks like a wonderful destination for a holiday trip. If I'm ever in the area, I'll definitely check it out.