The joys of spring 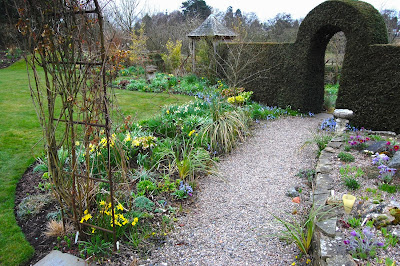 There are surprisingly few good spring gardens around. So often, a 'spring garden' consists of drifts of daffodils let loose in grass. Very nice, but so easy to do, it hardly counts as gardening once its done, just mowing at the right time. Then there are that small number of gardens where there are thousands of tulips, which, given that tulips are generally one-year wonders, means that the cost, not only of tulips but of putting them in, limits this form of horticultural expression to the very wealthy. And in times of austerity, such flaunting of wealth is perhaps a little rude (I remember Prince Charles planting tulips in meadow grass once, I don't suppose even his budget allows a repeat of that gesture; if it is, I look forward to the appropriate peasants' revolt throwing down the gates to Highgrove). 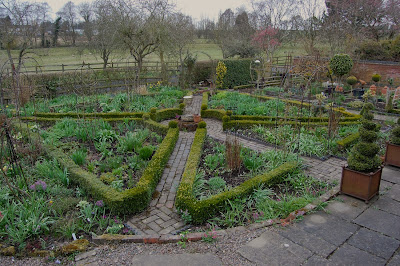 So, I was very glad to finally get round to visiting Olive Mason's garden in Worcestershire a few weeks ago, a garden well and truly full of the joys of spring. She opens for her snowdrops in Feb (for the NGS) and hopefully one day might do later too. A medium-sized and very intensely planted garden clearly relies on clipped box and perennials for its impact most of the year, but amongst these are a great number of bulbs and spring-flowering perennials. For many years, Olive has looked after a severely disabled son at home, and making and maintaining a garden has been something which she could do, whilst caring for him. Clearly, she spends a lot of time gardening, but at the same time it is an example of what I call intelligent management – a great deal of self-seeding and spreading is allowed or even encouraged, and so weeding and other plant control is very much like sub-editing – dealing with the detail.


Olive's plant management encourages what is key to making a good spring garden which then turns into a good summer garden – integration. Most spring-performing plants have a different annual cycle to summer-performing; they grow at lower temperatures, and by the time they are dying back, the summer species are coming into growth. Their growth cycles are complementary, so it is possible to shoehorn both into almost the same space. Summer perennials, and bulbs, and spring-flowering but summer-dormant perennials can be cheek by jowl. Those which are not summer dormant, such as many primulas, cannot be quite so close, but will still tolerate summer shading by taller perennials. Given this neat complementarity, it is possible to think of having two, completely different, planting schemes: spring and summer/autumn. A summer planting scheme, as it uses larger plants with a longer period of growth, can be the 'main' one, and then the spring planting can be thought of as another layer, dropped on top. The only real points of interaction will be perennial clumps emerging amongst the bulbs and spring perennials; for the most part these will just be blobs of background green, but a few with dark foliage (peonies and Anthriscus sylvestris 'Ravenswing') do look very nice alongside the predominantly blues and yellows of spring. 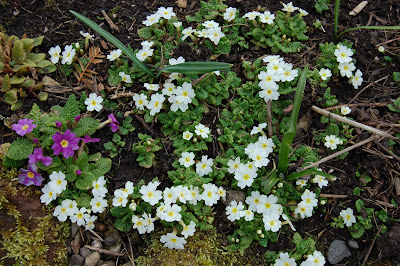 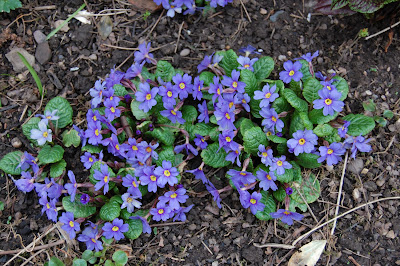 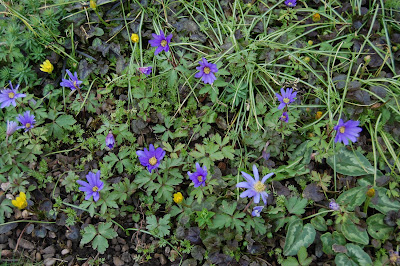 Visiting Dial Park made me realise how much harder I must work at this. We have plenty of Barnhaven primulas and Primula elatior which is simply the toughest primula out, some daffodils (not as many as I'd like, as so many have rotted off in our wet ground) and a few scatterings of scillas and muscari. Primula wanda will be on the seed shopping list this summer, nicely coloured very short and very spready primulas for seeding around the front of borders and amongst perennials. And I must try harder with corydalis – C. solida clearly seeds well.
Thinking of a garden as a two layer project: spring and summer, seems a good thing to keep in mind, one of those ways of looking, which can be very useful. 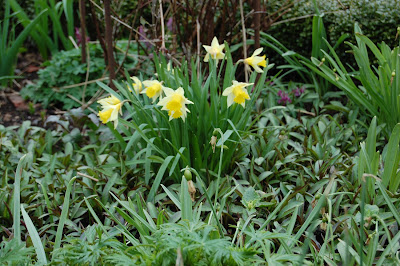 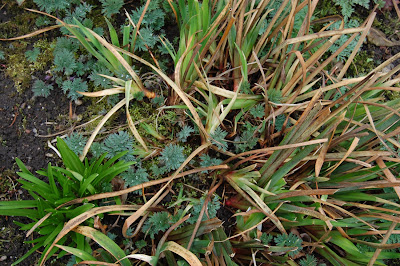 I have been to Dial Park in the summer and it is a joy. I havent yet got there in spring which is an oversight on my part as it is very close. I find wood anemones also good for colour at this time of year and they can be quite striking.

As for daffodils I managed to find a couple of variety that dont mind damp, a bit of research on Avon Bulbs helped

Last night, I was reading an article written for the NARGS quarterly about visiting Gothenburg Botanic Gardens in Sweden where bulbous Corydalis, hybrid Primulas, and minor bulbs both bedded out and naturalized appear to be the main players for spring color. Here in the U.S. botanic gardens rely on the victorian tulip+pansy+daffodil trifecta for spring too heavily.

Beautiful color and photos, Noel. Here is simplicity of what we enjoy in our PNW springtime garden. http://voiceinthegarden.blogspot.com/

Noel I was at Branklyn Gardens in Pertshire last week and I can remember that where the large drifts of ligularias and astilbles were last August are now covered in drifts of cowslips, cordyalis etc.

I enjoyed reading your post and looking at the lovely photos. I'm always attempting (and hoping) that my garden will have a smooth transition from spring to summer. I love my bulbs when they are blooming but not so much the dying foliage.

Here in New England, tulips - or at least certain kinds - seem to be a bit more permanent, perhaps because of the colder winters and hotter, drier summers, because around here there a quite a few gardens awash in wild mixes of tulips that have clearly accumulated over many seasons, sometimes without any recent replanting since the garden is generally unkempt.

Ive been trying for some years to fit spring plants and bulbs in to the usual summer perennial border, but the problem is it can only be done in a mature garden as the perennials are dug up to divide or move them around so often that the bulbs and interwoven spring plants usually get obliterated.