Just been to Courson for the first time ever.
I first heard about this French garden show years ago, when I had my own nursery, and by all accounts it was very good. Since then, I hear nothing but good things about it – indeed 'Courson' is nearly always accompanied by the word 'wonderful'. 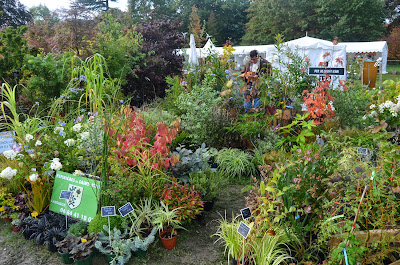 I got an invitation to lecture there at the weekend, so finally went. It is indeed wonderful, in fact so wonderful and I ask myself why I hadn't been before. Only so many hours in the day, days in the week etc plus the fact that years ago I made the decision that since so many of my colleagues went to often to France (part of that British middle-class love affair with France) I would leave them to it, and concentrate on the garden developments in the much less trendy Holland and Germany. Which I have no regrets doing, but time perhaps to spread my net a little more widely. 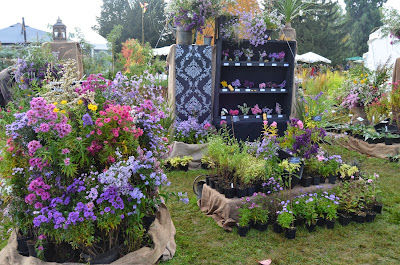 When I had the nursery (late 1980s) I did indeed make several plant-buying trips to France. I had the impression of a country which was just getting interested in plant-orientated gardening. Now I would say re-interested. Historically, France always led the way in fruit and vegetable production – absolutely no contest. In the late 19th century at the time that British gardeners were in the middle of the golden age of Victorian gardening, French growers were also extremely active. To be fair, it may be that they were even more active. 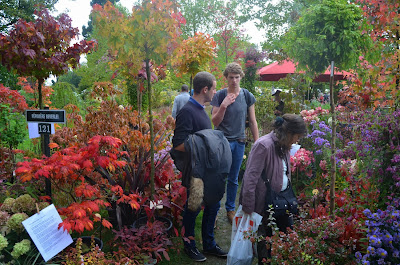 In the late 19th, British gardeners were still very focused on exotica and summer bedding, but about to make a shift to the great era of plant hunting. The latter brought in many trees and shrubs but arguably benefited large gardeners on acid soils more than anybody else. The French focus remained much more on garden plants. One man, Victor Lemoine of Nancy, bred a stupendous number of garden plants. No-one seems to have written a biography of him, which is a shame, as he was extraordinarily productive (I have written a little in Hybrid). During the 20th century I get the impression that French gardening went into a bit of a slump by comparison. British gardening did too, but by the 1960s Adrian Bloom, Beth Chatto and a few others were doing their best to liven things up. French interest seemed to lag behind.

Since the 1980s however there has been an explosion of new nurseries, plantsman-gardeners and interesting gardens. Indeed, walking around the nursery stands of Courson and reading through the accompanying catalogue, I almost feel like saying that perhaps there are now more interesting nurseries selling interesting plants than at home.
The lovely thing about Courson, is that the nurseries who go to sell plants are expected to make a real effort with their stands. Many do, and the results are beautiful, their asters, salvias and autumn leaf colour plants contrast with the greens and emerging reds of the trees of the expansive and lovely Domaine de Courson. Some, mostly Dutch and Flemish, seem to just bang out crates of plants in a utilitarian way though. Most exhibitors though seemd to get a real pleasure out of designing their stands. One Flemish 'plant supermarket' nursery however had a fantastic array of very unusual shrub and trees, in 9cm pots at around 5 euros – grow them on for a year or two and plant out. Since we'd normally expect to pay four or five times this amount for a plant in a two or three litre pot, this struck me as a very good way of selling plants. British nurseries, with their currently woeful selection of woody plants, please note.

Courson is a great place for people watching, many of them, needless to say, wonderfully stylishly dressed. French garden people look a very anglophile lot: nice cords, Barbour jackets and those leather knee-high boots that no working gardener could possibly afford. Good food too of course, and a nice librarie. Talking of which, there is now a garden bookshop right next to the Place de Concorde at the western end of the Tuileries – a sure sign that gardening in France is now very fashionable. When can I come back? 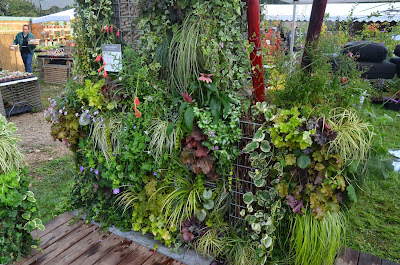 Posted by Noel Kingsbury at 8:32 AM

I'm happy that this occasion to speak about your last book just translated and published by ULMER made you discover this fantastic flower show. Unfortunatly we failed to meet, but i hope it' will be for an other occasion;; perhaps next spring ? ( 3rd WE of May).
Best wishes
Didier.

so you have been accomodated at the castle ! great !! I missed your lecture due to my car refusing to start, stupid car ! just cheered myself up reading a few pages of your book, instead .... your description of Courson is really funny and pleasant, I confess that, having known the flower show since the beginning and having a rather small garden already packed with plants, I am not as curious as I used to be, and I am also not keen of so many exhibitors, some of them, as you say, looking "I just came to sell my plants" , anyway your enthousiasm will freshen up my eyes for nest spring show (just as your writings freshen up and transform my idea of gardens!), thank you !!!!

How do people in the UK get all those inevitable plant purchases home? Any problems?

Yes I too have started to admire your fine writing. I recently read a 2012 copy of the Garden and you ridiculed a suggestion that owners of neglected gardens should be policed by their local authority - well I think it was you, it was certainly your style!
Wish I got offers to lecture at some of the wonderful places that invite you.
I loved that salvia, is the blue one S. guarantica?

Good question by Anne. At the Seattle Garden Show they provide Phytosanitary inspectors so that Canadians have certificate to take back over the border. The lineups strongly discourage sales. Is that needed for Europe?

my question too. I was in Paris in September, really enjoyed the parks and gardens. I think they are tres chic and lovingly designed.

That bookshop in the Tulieries is a treat, btw, found there, amongst others, the very nice "Gardens of Paris sketchbook" by Fabrice Moireau (watercolours)

Noel, I'd recommend as well the plant fairs at nearby St Jean de Beauregard, which are lovely and less commercial than Courson - plus there is a beautiful old walled potager to enjoy.

The last time we were there, a Dutch plantsman told us that Courson was somehow actively involved in ensuring St Jean de Beauregard didn't become better known to Brits, who make up a fair chunk of Courson's visitors. Whether or not that's true, one of St J de B's plant fairs is definitely worth a visit.

I'm glad you found the little gardening bookshop in the Tuileries - it's been there some years now and is actually run by the Louvre. It has a great selection of stuff, much of it hard to find elsewhere, and is a lovely, quiet, cool place to stop and browse after a stroll through Le Nôtre's great public gardens.

Landscapelover, I am a fan of st jean de Beauregard plant fairs, much more than Courson, for a lot of reasons : less commercial, warmer and simpler atmosphere. years ago I used to help a friend (who had a small nursery)who used to exhibit in both fairs, the owners of St Jean, Mme and Mr de Curel , used to make us such a wonderfull welcome, paying great attention to the needs of the exhibitors.
there has always been a "fight" between Courson and St Jean, Courson has indeed much more visitors, but to me, a good part of the exhibitors in Courson do not really relate to the purpose of the fair, i.e. allowing plants specialists to show their production.
regarding the transport of plants through the Channel, I rather often bring back plants from UK, either in my car or by coach , I have never seen any control ....