Perennials - which is the best reference book? 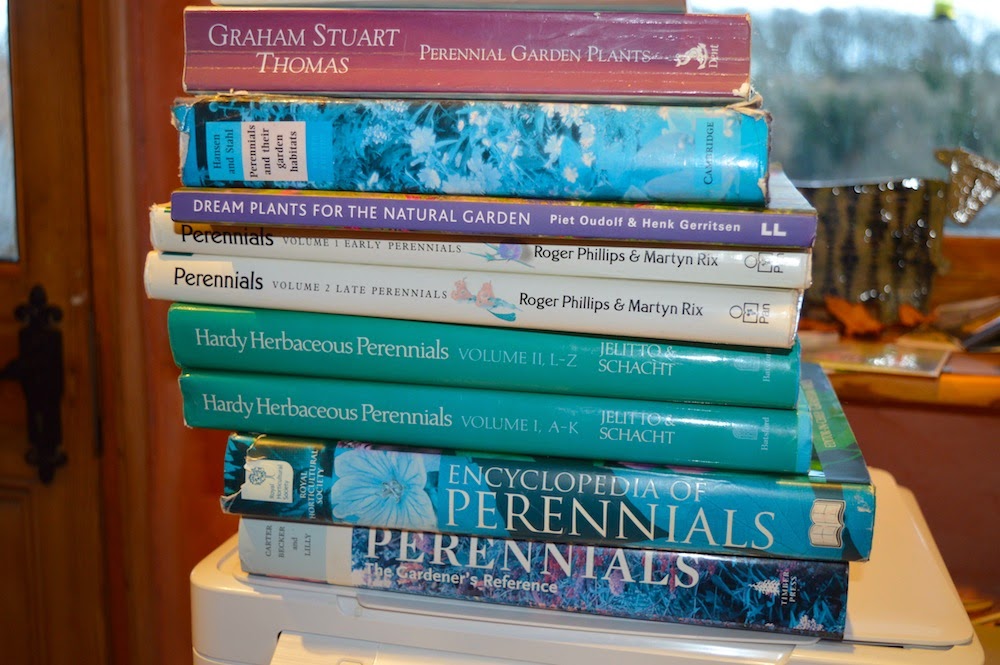 Several people have been asking me recently about the best reference books on perennials. So here goes (until that is I've done my own!).

Perennial garden plants, or, The modern florilegium: A concise account of herbaceous plants, including bulbs, for general garden use. Thomas, G. S. (1990). Timber Press.
Well with a title like that, it looks like someone thought they were in the 19th century. Graham Stuart Thomas probably thought he was. He was one of the great gardeners of the 20th century, gardens advisor to the National Trust, and saviour of many old rose varieties. His style is rather mannered and louche, the voice of a rather upper-class gent reminiscing about plants with his second 12 year old malt whisky of the evening in his hand. All very much from deep personal experience and occasional prejudice. Enlivened with quotations and rendered very useful for its 'special purposes' lists in the back.The weak point is the illustrations - few and far between and ancient looking
Still my favourite.

Perennials. Phillips, R., & Rix, M. (1993). Pan.
Comes in two volumes, one for early and the second for late. Not exactly a mine of information as the entries are short but this is the book I always turn to when I want to check on the identification of something. Quite a lot of pictures of things shot in the wild, which gives some nice context. Probably the best source of illustrations.

Allan Armitage on perennials. Armitage, A. M. (1993). Prentice Hall.
The sheer weight of this book could do you some damage if it fell off your bookshelf, which reflects the amazing amount of knowledge in it. Revised in 2011, looks a little dated, engagingly written, still the gold standard for American gardeners and actually has more hard data in it than any other book. This man knows his stuff inside out. More down to earth than G.S. Thomas Esq., and likewise very poor on illustrations.

The Royal Horticultural Society encyclopedia of perennials. Rice, Graham. 2011. Dorling Kindersley.
Sumptuous, well-illustrated, very comprehensive, lots of interesting supplementary information in boxes. Looks beautiful but non-British readers will be irritated by its very British focus, while designers will be driven insane by its lack of information on spread. There is something which looks identical going out in the USA under the aegis of the American Horticultural Society edited by Kurt Bluemel; I'm not 100% sure but almost certainly the same thing.

Hansen, R., & Stahl, F. (1993). Perennials and their garden habitats. Timber Press.
Not an A to Z but an incredibly useful setting out of the German approach to thinking about perennials in terms of plant communities. Read this, understand it, and you will have an immensely useful opening to a very different way of thinking about plants to the Anglo-American approach.

Perennials: the gardener's reference. Carter, Susan, Carrie Becker, and Bob Lilly. 2007. Timber Press.
Detailed, comprehensive – but could do better on this score. Valuable in that it pools the experience of three very experienced growers. American but perfectly usable in Europe. Provides suggestions for planting companions so useful for design too. Probably the best all-round book here.

Dream plants for the natural garden. Gerritsen, Henk, and Piet Oudolf. 2000. Timber Press.
Planting the natural garden. Oudolf, Piet, and Henk Gerritsen. 2003. Timber Press.
Very nicely and sometimes humorously written by Henk, with information shared from both authors. Does not aim to be comprehensive but is a good starting point for those interested in contemporary perennials; organised in a very sensible way around idiosyncratic categories that help beginners make sense of the plant's basic character. Biased towards cooler winter climates. Plant selection slightly out of date now.

Zatloukal's border perennials: a discursive encyclopaedia. Zatloukal, R. G. Z. 1997. Blandford: Spider.
Originally privately produced, an idiosyncratic guide with some useful plant selection lists at the back. No illustrations. Definitely worth a look at.

And now for some websites.

www.perennials.com
3,000 perennials, very American in its selection, but thorough, clear, formulaic like all online databases. A commercial selling site from what I can see, which I suppose biases the selection, although they do not make it obvious they want to sell to you.

www.stauden-stade.de
A commercial site that is trying to sell you plants, but very thorough, more detail than any other weviste. (In German).

www.plantify.co.uk prides itself on being 'Britain's largest plant selection' – I think they must operate as an agent for several nurseries; not particularly informative, crude generalisations and sometimes inaccurate.

Royal Horticultural Society website, which covers trees, shrubs etc, as well.
Generally agreed to be crude and clunky, its ambition to include photographs of everything in UK cultivation is a noble and worthwhile one which might make it worth looking at one day. Has been combined with the Plant Finder, with the effect of massively reducing the functionality of the latter. An example of how the bigger the software project the bigger the cock-ups.
Cotswold Garden Flowers
British nurseryman Bob Brown, he of the acerbic lecture and plant commentary,  has written an excellent, and needless to say opinionated, and sometimes funny, guide to a vast array of plants, many not discussed elsewhere. Very basic info, but valuable. Some illustrated. The man has immense knowledge and a very good eye.

www.shootgardening.co.uk
Currently the best UK gardening A-Z database, information a bit slim but easy to use and navigate, and pretty comprehensive.

Missouri Botanic Garden Kemper Center
is much the best, with really detailed information, delivered in the kind of text-led non-formulaic way rarely seen on the web. It is of course biased to North America Midwest and east coast and the range is perhaps not as comprehensive as some - the information though is first rate.

Please send me your comments on your experiences and recommendations which I can include in future reviews.

If you like this blog, why not check out my e-books, which are round-ups of some writing I did for Hortus magazine back in the early 2000s, along with an interview with the amazing Beth Chatto. You can read them on Kindle, or Kindle packages for smartphones or the computer. You can find them on my Amazon page here. You will also find my soap opera for gardeners - currently running at eight episodes.

Posted by Noel Kingsbury at 1:04 PM

I find plants for a future database really useful - particularly for it's focus on native habitat www.pfaf.org.

For me it's very interesting the web of Missouri Botanical Garden http://www.missouribotanicalgarden.org/
It has a lot of information about perennials, trees and shrubs for continental climates.
Best regards.

Hello Noel. The Missouri Botanic Garden website is a great resource not only for perennials but other plants as well.
Missouribotanicalgarden.org.

Another website I refer to is www.cgf.net. Although this is the website of a small nursery (Cotswold Garden Flowers), the encyclopaedia section describes many plants not in their sales range. There are also 'ratings' on some plants - personal but useful guides.

In my formative gardening years in the sixties I was greatly influenced by all the writings of Alan Bloom especially as to his innovative island beds and minimal staking.
I bought several shrubs from 'Plantify' last year and was very pleased with them although taking delivery in March I needed my cold greenhouse to properly harden them!
As I was buying a diverse range of uncommon plants it meant only a single charge for postage rather than several!

Many thanks for this comprehensive list of perennial resources.

I will share the post with my neighbour who will be delighted with it! In fact is was because of my neighbour that I came across your site.

I take my smartphone with me to gardening centres and use www.missouribotanicalgarden.org/
to verify information on the tag. The tag might say "adapts easily to your garden" whereas the website says "invasive". Back it goes.