and the Cyclamen gets the prize!


Its a long time since I have been asked to judge anything at a flower show. The last time was in Seattle years ago, when we (the late Wayne Winterowd and Barbara Ashmun) gave top prize in the show gardens category to a community organisation that worked with disadvantaged youth and a couple of the flash landscape companies who had pored money into all-singing, all-dancing gardens were none too pleased.

The Cornwall Spring Garden Show is an early one, and a really lovely one. Modestly sized, very high quality with little of the tat that lets down so many shows, lots of very good little nurseries, and a wonderful setting at Boconnoc, one of those secret estate landscapes which you feel privileged to visit. I have been surprised by the number of people who have said to me over the last week “isn't it a bit early” - which indicates that they can't come down here that much. Spring happens early here. There is so much to see in March: magnolias, camellias, rhododendrons of course, but drop your eyes and there are primroses and daffodils everywhere. 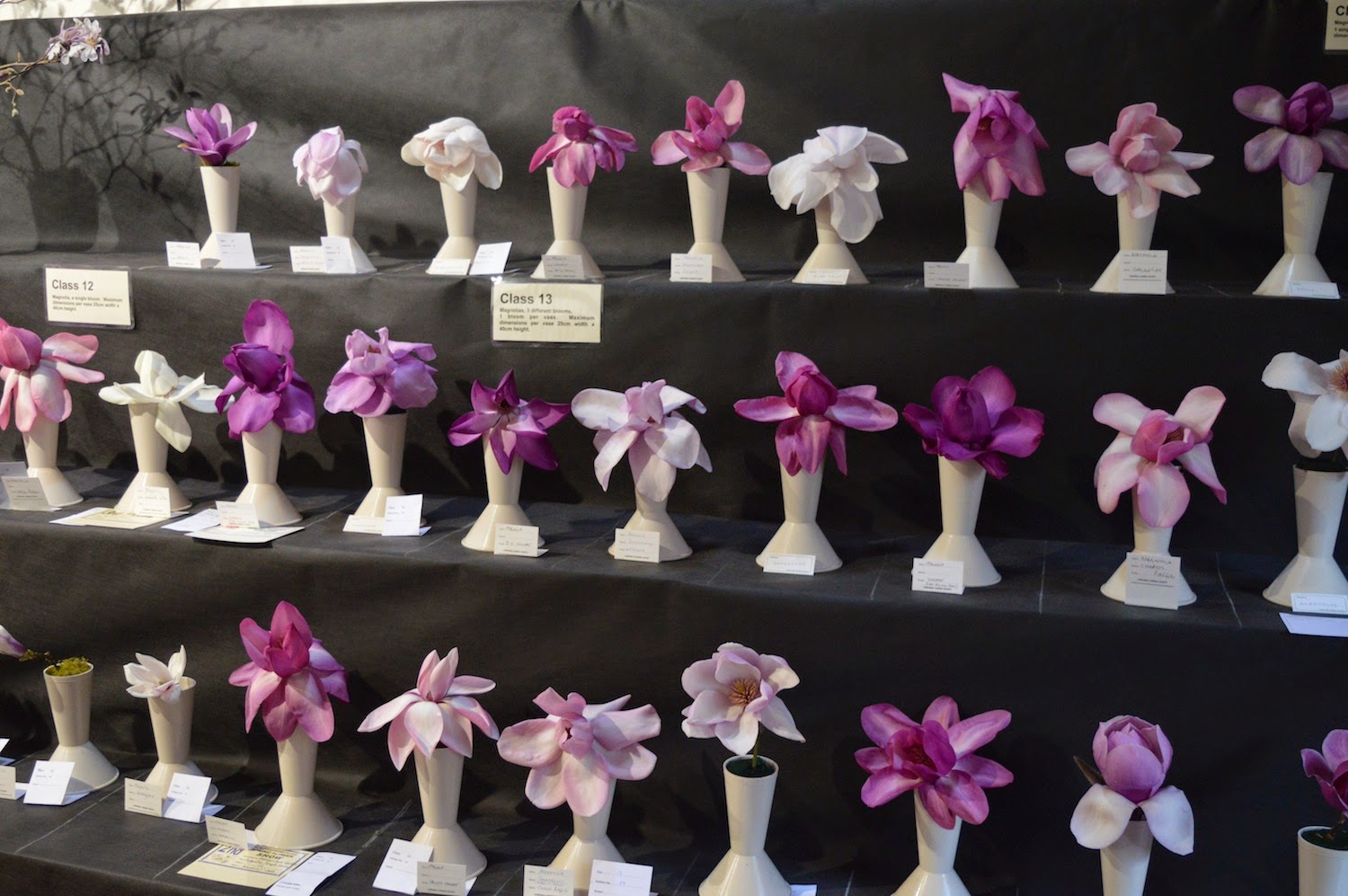 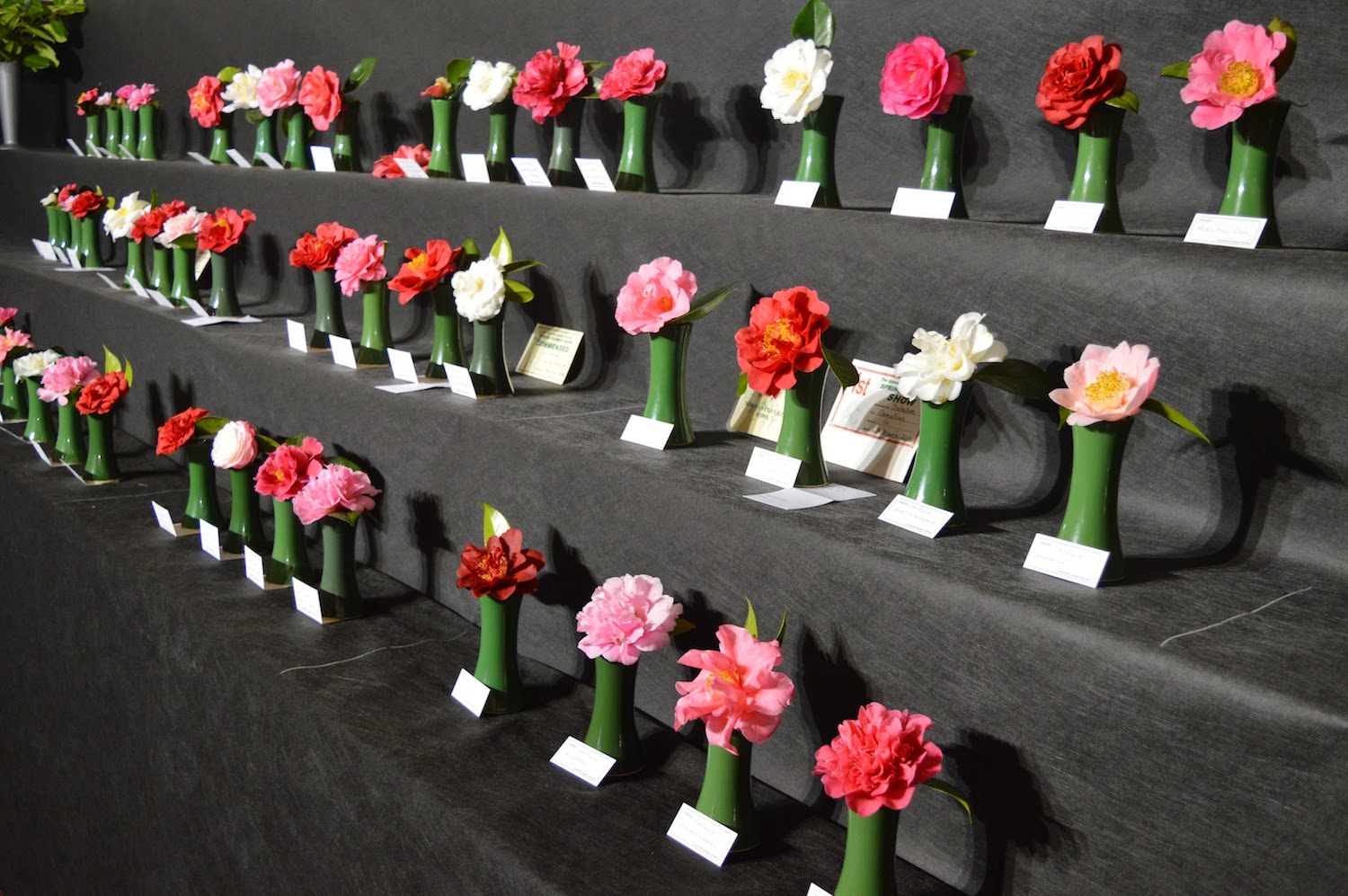 Competitive showing of plants and cut flowers is a long-established part of the British flower show tradition. Its always thought that it encourages quality gardening, although in actual fact most of the entries seem to come from a fairly limited number of people, who one imagines vie with each other every year. At least in the rather miscellaneous classes I was co-judging (Herbaceous, Pot Plants and Alpines). In some classes, however, such as daffodils, success for new varieties in shows is of considerable importance in deciding whether or not they get to be successful. And a really good showing of a plant can help draw attention to something which deserves it.

What gets shown very much reflects what is currently fashionable. Hardly any tulips. Lots of hellebores, which are difficult to show as many are by this time going over. Some very nice primroses/polyanthus, including some new cultivars I have not seen before. Rosemary, my fellow judge, and I make our decisions quickly and we are almost entirely in agreement, and we fill each other's knowledge gaps nicely. Plant condition is vital, presentation important but not as much as the condition and quality. We reward more unusual or new varieties, and we try to reward evidence of dedication - which means that the perfect bunch of (say) tulips that could have been grown from a packet of bulbs bought last autumn won't necessarily get marked above something less visually impressive but which we know must have been cared for for years. 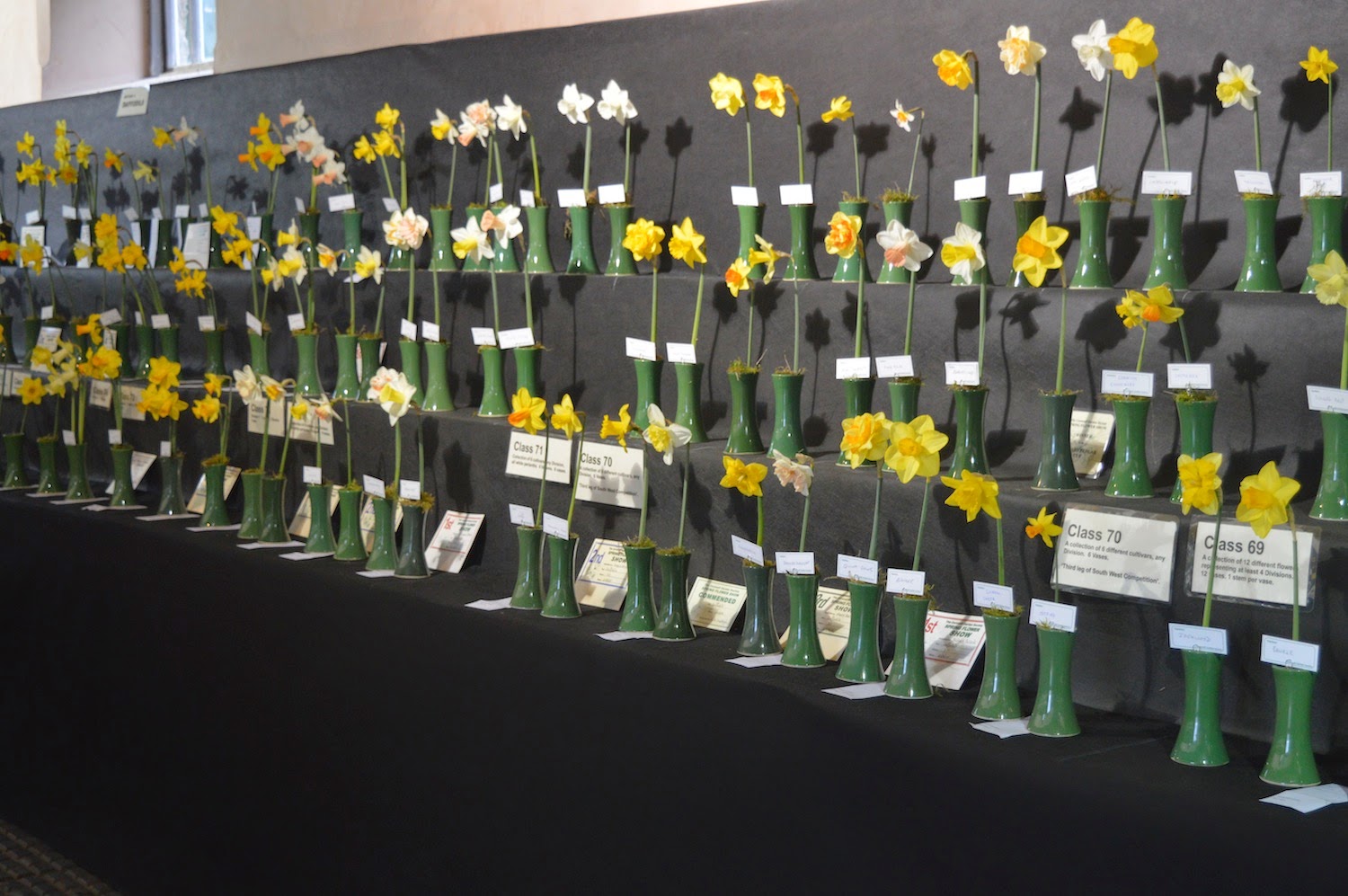 We got our judging done relatively smoothly and then had to decide on what would be put forward as 'best in show'. A wild form of Cyclamen persicum really stood out. Someone had obviously grown it for years, and it had wonderful silver foliage (and this is a species whose foliage tends to be fairly predictable). But, it had to go head-to-head with the best daffodil prize. The daffodil judges were taking ages, and from our peek into their exhibition room were agonising over over every bloom, and doing a lot of grumbling, or at least petal-by-petal critiquing. When they had finished we had to agree between us on a 'best of show', but comparing twelve nearly perfect daffs with one wild cyclamen seemed like comparing chalk and cheese. I rather determined I would fight the corner for our cyclamen. The twelve nearly perfect daffodils I actually rather took against; they were all relatively modern division ones and twos: big, full-petalled flowers – silicon-enhanced porn star daffodils, not the smaller, subtler, more airy varieties I (and indeed many others of the gardening public) now tend to go for.

So, the two daffodil judges, Rosemary and myself stood in front of the daffs, with the cyclamen brought in for comparison. I gave a bit of an impassioned speech about the cyclamen, and then the daffodil folk began to admit that one or two of their flowers were actually less than perfect, and in no time at they crumbled and admitted that the 'best in show' award should go to the cyclamen.

I love everything about this post: the behind-the-scenes judging, the fantastic flowers and their photos, the triumph of the cyclamen ... everything! And it's a particularly inspiring post, as well, with the little guy winning. Yep. I love this post!

And the winner is, "Noel Kingsbury for the best garden blog post ever!" Noel, you are, and always will be. outstanding in your field~I needed a little bit of lightheartedness and you delivered. Thank you for so many ways you have educated, entertained and inspired me in my gardening, garden writing and garden travel. You are my favorite garden writer on so many levels!!!

That's a beautiful blog post, thank you. But I am curious as to why you are running a blog that is separate from your website, especially in view of your comment about donations. I teach blogging, and generally advise people to run their blog directly as a page from their website, as the hits on the blog count towards the website's ranking. It's extremely difficult for blogs to make money (unless you are in the parenting or financial arenas). But when linked to one's website, blogs are an excellent way of promoting one's business. You don't have to publish this - I'm not commenting to attract business, but genuinely curious as one of the questions I am often asked is 'why would you run a blog separately from your website?' Your website is very interesting too, and I certainly have some of your books. with best wishes, Alexandra