Reviewing progress at the Olympic Park

A trip to the Queen Elizabeth Park with a lively group from the Landscape Institute – this is the vast new park in east London which is the legacy from the 2012 Olympic Park, the largest new park in the UK for over a hundred years. I was interested to see all the various naturalistic plantings, particularly the ambitious plant mixes created by Nigel Dunnett and James Hitchmough from the University of Sheffield; Piet Oudolf has created some borders here as well. Good to take an LI group around, get their opinions and feedback and since a lot of them have been here already find out what they thought it is like at other times of year.

I had been here in June, and had left with a vague feeling of discouragement, so to see much looking really good just now has been most heartening. All in all I'm impressed! There is a lot of very colourfully exuberant planting, well maintained and looking as if it could continue to develop well over the next few years. This is a very large, ambitious and complex park- it is interesting to see the management documents from the London Legacy Development Corporation who are managing it, which outline a large number of different habitats, all receiving different treatments: particularly mowing and cutting regimes. There was a lot of scepticism in the group about how many of these will be adhered to, and suggestions that there will be an inevitable tendency towards 'one size fits all'. We shall have to wait and see.
Much of the 'splash' of the Olympic Park plantings in 2012 was through annuals, which of course were a one-year special. Many of those areas have been grassed over now, although when I was here in June there seemed to be a lot of areas which looked like ex-annuals, with California Poppy (Eschscholzia) doing rather nicely. These areas often included a lot of native plants too and were attractive but did not look as if they would stay for long – I could see grass invading and taking over in a year or two. 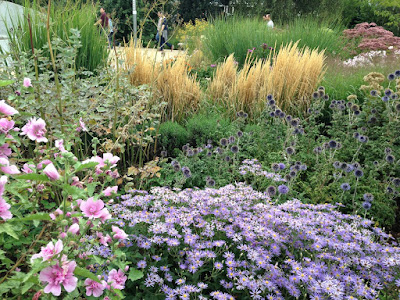 There are a lot of areas which are basically using a limited range of native flora (which here in Britain is pretty limited anyway) alongside the tussock grass Molinia caerulea, on what looks like a pretty infertile substrate. Unlike most British grasses, the molinia will not form a suffocating carpet over other plants – because it is a tussock-former, and the low fertility soil will reduce the growth of other grasses as they will inevitably seed in from outside. So these should look good for a long while yet.
The Hitchmough/Dunnett plantings (not forgetting garden designer Sarah Price) who knitted them altogether were particularly impressive. They made four geographically-defined plantings along the waterway opposite the London Aquatics Centre: Europe, North America, Southern Hemisphere (basically South Africa) and Asia. In June there wasn't much in flower, although I don't think I'd got as far as 'Europe' on that occasion (I got jolly lost – it is a huge and at times disorientating place). One of the weaknesses of the Olympic Park as legacy project was probably that there was little thought given to spring bulbs, perennial or shrub performance (the games were in July). In fact one of the unusual things about the whole place, is the remarkably low importance of the usual range of horticultural shrubs – refreshing. Most of the shrubs here are native species. 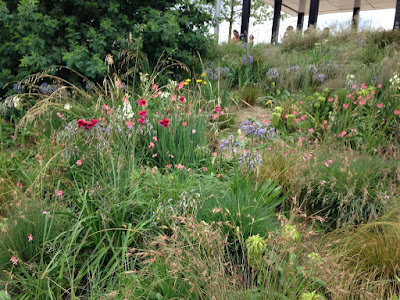 The North American planting was just about to come to peak flowering – in fact there would appear to be very little in flower before this time; this is a planting which will end the year in a crescendo. The Southern Hemisphere mix, which looked rather dull and very gappy in June had clearly had a good summer and still had plenty of life in it. Over time the agapanthus will form solid clumps and the dieramas will probably seed, so filling the gaps. Of all the mixes this is the most exuberantly colourful and exotic looking: gladiolus, galtonia, kniphofia with underplanting of New Zealand carexes annd ?restios. The Asian planting was the most successful in terms of ground coverage, space filling and colour, but relying on very few species: Persicaria amplexicaulis, Anemone x hybrida, and grasses, and there was little in flower here in June.
Since the Olympics, the main development has been some Piet Oudolf planting up around the various public grass and playground areas. It was interesting to see what he comes up for a public space which needs to have a simple, straightforward management regime – lots of perennials and grasses in easy-to-maintain small groups making a great impact as a backdrop for nicely-sized grass areas, very well maintained and mostly doing really well. Very little was in flower in June though and there was a rumble of criticism that the planting could have offered a longer season; the same has been heard about his new planting at Hauser + Wirth in Somerset. It being a Saturday, the whole area was being incredibly well-used, the people of London in all their amazing ethnic diversity picnicing, playing, chatting and relaxing.

There are planting lists on the QE park website, which is at first sight looks a cheerfully dumbed-down affair, with a rather inadequate map but if you dig around you will find: http://queenelizabetholympicpark.co.uk/the-park/attractions/parklands/gardens/2012-gardens

Posted by Noel Kingsbury at 2:57 AM

Interesting on the planting - a trip worth making, I think. (there aren't many of those for me) But you don't comment on the use of space and how it all works together apart from being disorientating. (and popular, which is pleasing). Tell us more?

Some interesting planting. Is the annual meadow still there ? It looked fabulous on tv.

Wow, sounds good and very interesting. Seems to be a well done project. Love to read this.
Happy days and all my best from Austria
Elisabeth