'A Garden Flora' - for Christmas reading all year round 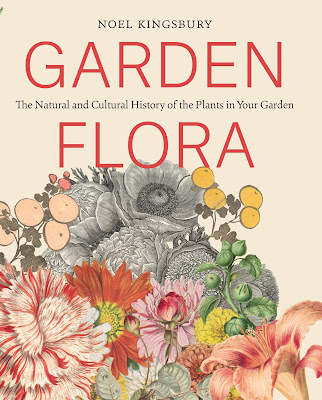 Here we are, hot off the press!
My new book, which I was working on last year. A reference book, a dipping-in book, an ideal Christmas present of course.

While this is my shameless Christmas promotion, I've been wanting to write a blog post for some time about why I wrote it.

Why does anyone write any book?
Primarily because we see a gap in the market. I see 'we', but which I mean an author (potential), commissioning editor, or the publishers' sales team. The latter often know nothing about the subject matter, but they are good at judging trends, and when to leap in with a new concept, or (more usually) a re-visit of a trend already established.

Japan was quite a big part of the story. I have long been fascinated by the way that western growers fell with glee onto Japanese nurseries when Japan opened up to foreign trade in the
mid-19th century, taking advantage of, but rarely giving the credit to what Japanese growers had achieved with variety selection and hybridisation during the Edo period from 1600 onwards - even discovering the principles of heredity first credited to Gregor Mendel a hundred years later. I had one very good Japanese source, a privately published book (again thank you ebay!), but also the help of my friend Ayako Nagase who was able to get me copies of some book illustrations from a university library in Japan.


One of the most mysterious stories in the book is about Primula sinensis, similar to, but rather more spectacular than, the winter pot plant, P. obconica. Like this, it has allergenic hairs on the leaves, which probably accounts for its fall from grace. During the early 20th century it was a very common pot plant in British flower markets; during the 1930s a workhorse for plant geneticists, but since then has become effectively extinct in cultivation in the west.

The very best source of images though has been the new system of Creative Commons, where institutions make digital collections available, for free, only seeking accreditation. Mostly the images are far too small to publish but the US Library of Congress has got a fantastic collection, which can be downloaded and used as large file sizes - there is a great collection of early photographs of Gilded Era gardens there, as well as yet more Japanese material. Amsterdam's Rijksmuseum, under its previous director has also put its entire collection on line - you can ask them for large files for publication and they'll email them to you. Almost the most enjoyable part of this book was cruising Rijkstudio, where you can create your own virtual galleries to source pictures. It has been an incredibly generous policy and one which has done much to cement the museum's global reputation.
This has been a wonderfully enjoyable book to work on, and one which I hope one day to return to, to fill out the number of garden plant genera I have covered, and fill in gaps. One of those never-ending projects. I hope lots of readers will enjoy it too.

Perfect! Just what I have been looking for in terms of the ecology, habitat and plant community associations that the plants we used in our gardens are from. Too late for Christmas list, but will certainly be buying myself this book as a New Year present! Thanks Noel.

Too many garden books are never enough. I look forward to this. On my eye glazing, but enthusiastic garden tours, if I can give a plants potted history - I do. This bores the extended family witless, but I like to persist. A gap well filled Noel, hope you make a packet.

What an absolutely amazing book! Well done you on an incredible piece of work. We're not worthy!! Marc Owen

writer of life into blog said...

Hello, correction on the Dutch illustration... it's derived from Indonesia... not exactly Malay... although perhaps in the past, it may not be as distinctive as Indonesia.