Singapore's Garden Extravaganza - with a focus on cloud forests 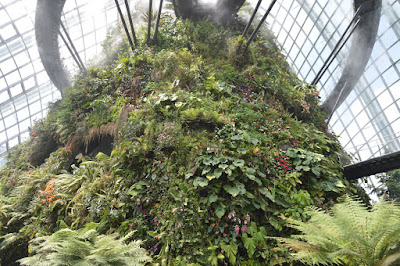 The last time I was in Singapore which must have been getting on for ten years ago, Gardens by the Bay was under construction. The roads near the Marina were lined by trees in enormous containers, making you feel as if you had just driven into a garden centre or nursery that catered to giants. All were destined for one of the world's largest and most ambitious horticulture projects.

So, the first thing on re-visiting, was to get down there and see how the project was doing. The first impressions were very much that this was opulent public horticulture, walking a path between well-funded amenity horticulture and something more educational, but without any pretence at it being a botanical garden. Spectacular constructions, such as the signature 'super trees' and huge scale plantings make a powerful impact, but don't help define quite what the garden is for, other than impressing the visitor. Public gardens have often had this role. In trying to make sense of this extremely large, very well-funded and ambitious project it helps to think back to the Victorian era.
In that golden age of gardening, public parks were about municipal pride, and declaring the status of the city or community that funded them. Not much chance of that happening in today's Britain, the most centrally-controlled country in Europe, where local government is so squeezed by the politics of austerity that basic services are beginning to break down. Singapore, like other successful Asian economies, are in a similar situation to where we were in the Victorian era. With its reputation as a garden city (an inheritance from the British Empire) and the world's leading centre for urban greening, the use of gardens as a national icon seems natural.
The scale and level of control is all a bit overwhelming. The control is again, very Victorian, and likewise dependent on cheap labour (mostly south Indian Tamils). It is also very Chinese. Singapore is the ultimate state run on Confucian lines. “We think of the government as being like our parents” says a Chinese friend (and no particular fan of her government in Beijing and in fact having deep personal reasons for thinking quite the opposite). 'Planning' and maintaining control have been key to the city-state's (amazing) success as an economy. Nice tidy public gardening on a mega scale is all part and parcel of a paternalistic state which wants its citizens to enjoy their spare time in suitably safe and unthreatening ways. Its not somewhere where many western liberals would like to live, but it's the only place I have been where multi-lingual poster campaigns invite people to grass up their employers if they face unsafe working practices.
Possibly inspired by, or aiming to go beyond, Cornwall's Eden Project, there are two vast 'greenhouses', kept cool rather than warm, using a clever heat-exchange system powered by decaying compost. We went into the Mediterranean one first. Here there are some good displays based on the various Mediterranean climate zones around the world, and good interpretation. Trouble is, someone's been unable to stop themselves having a go at some of the shrubs with their hedgetrimmer. There's a terribly kitschy faux-Chinese garden, planted with loads of forced-looking dahlias. 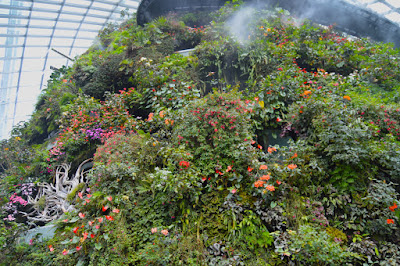 And then, the other 'biome'. Something completely different. Dedicated to cloud forests, this is the most sustained, visionary, high-investment naturalistic planting extravaganza ever. One of those things that gives one real hope. I'm assuming most readers will know what a cloud forest is, but for those who don't it is a mountain region that gets very high precipitation, much of it from being in the clouds. Cloud forests are biodiversity hotspots, often with very high rates of evolution, as every mountain side and valley will have slightly different conditions and the physical fragmentation of the territory allows for isolation and evolution. Think orchids, bromeliads, vireya rhododendrons, tropical begonias. The Gardens by the Bay Cloud Forest biome sends its visitors up in a lift to descend on a vertiginous series of aerial walkways around an artificial mountain covered in plants growing practically vertically.Vertical planting has had a bit of a chequered career in the temperate zone, but here, in a cloud forest zone (real or artificial) a lot of species grow like this naturally. 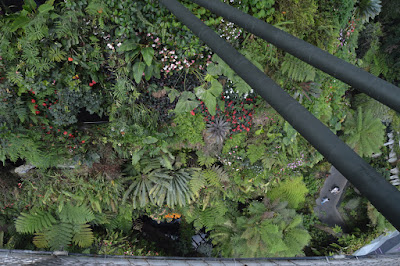 The standard of everything is just so high, the interpretation spot-on, with firm and imaginatively-driven messages on conservation and climate change. Given that we are entering the Chinese century, it is really encouraging to see such conservation leadership coming from within the Chinese language community. 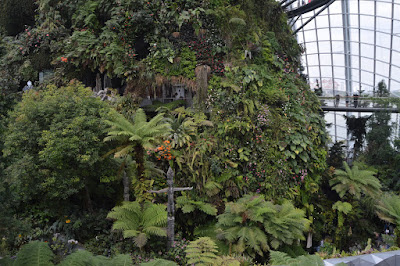 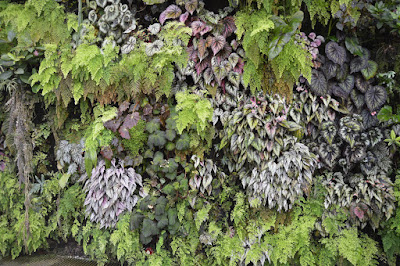