The perennial revolution marches on! The Czechs and Slovaks are now doing research into public use of perennials, very much inspired by the German randomised mixing technique. Extremely interesting afternoon at the Landscape Dept. of the Slovak University of Agriculture in Nitra. Jo worked at Bratislava Comenius Univ. from 1993-5, so we now all about alcoholic Stalinist heads of department, reinforced concrete buildings , dead hand of Marxism-Leninism exams etc, etc. So delighted to find lovely new building,  ditto perennial border, ditto prof, and young staff well clued up on all the German research, on Oudolf, and ‘the Sheffield school’. On the subject of profs. a sure sign of age is when the professors start to be younger than you are.
Reading Prof. Hallova’s research I realise that she’d brought up an issue none of the rest of us have ever considered – that plants engage in chemical warfare through ‘allelopathy’ amongst themselves and that this impacts on planting combinations, so for eg. nepeta and euphorbia suppress the growth of asters and geraniums. I immediately think of all the Euphorbia cyparissias I let rampage in my borders. Fascinating! I think I should set up some trials back home this winter and really see if it is an impact we should really worry about in a practical sense.
Given that it's a long time since I’ve driven round Austrian roundabouts it is just amazing to see how much perennials (in the 40-60cms height range) are used in traffic islands and roadside environments. Really just about every place I have driven through in Oberösterreich seems to. Wunderbar!
A misty, soggy, chilly stomp around some dry meadow habitat near Mikulov in Czechia, Scabiosa ochroleuca and Aster linosyris flowering away in profusion. Sabine Plenk (a colleague from Vienna’s BOKU) and I agreed it was a ‘second spring’ effect as autumn rains re-moisten very thin stony soils. Nice to see the local flora (Pannonian-Pontic) used in the grounds of the castle in town in an ornamental way. Not so sure about the monstrous Christmas tree in the town square and all the artificial snow – but it turned out to be a film set. Made me freeze just looking at it. 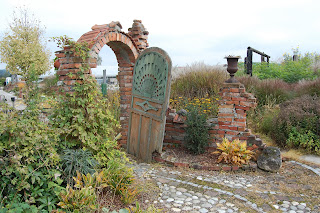 More soggy foggy in Austria, can’t see the mountains! Furchtbar! Schade! However thinking long-tmer garden visiting in Austria is looking up. There is a new guidebook, published by Callwey Verlag and based on the very thorough Gärten Reiseführer for Germany. Lots of really rather nice sounding Privatgarten open too – how soon can I get back to check them all out? Only managed Linz Bot. Gdn. (good, some nice mature rarely-seen shrubs) and Christian Kreß’s nursery – Sarastro – at Ort-in-Innkreis. FAB, FAB, FAB. If this nursery were outside Guildford, you’d be blown away by it. Its not just plants, its really funky architectural salvage, kinky walls, alpines grown in all sorts of weird rubble. Its Berlin grunge meets Alpine Garden Society. Its cool. Ain’t nothing like it back home. 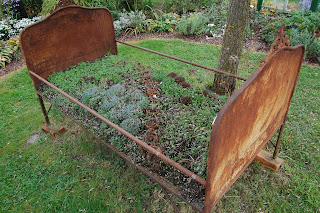 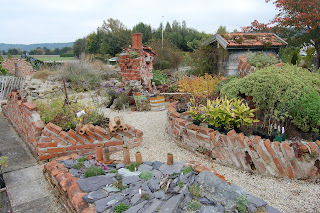 Forget the Sleazyjet flight to ‘Vienna’ (in reality Bratislava). Get the car out – the GB sticker, the green card, the ferry/chunnel  ticket, the headlight deflectors, and thrash down the autobahns (yes, you really can drive as fast as you like) and load the car up with plants. There’ll be loads here you’ve never seen before. And while you about it you can load up with Austrian wine, all of it totally gluggable and varieties like Grüner Veltliner you never find amongst the Chard and SauviBlank in Sainsbury’s, and the time spent on the autobahn will feel like its worth it. I did one better, stocked up with Slovak wine at the Nitra Tesco – just as good and miles cheaper. Stuff the Dordogne, up the Danube!
Posted by Noel Kingsbury at 11:23 AM

nice to read you enjoyed austria! btw, its "sarastro" nursery - named after the figure in the opera "the magic-flute" by mozart. Maybe you have come across Campanula 'Sarastro' (C. punctata hybrid)???...;-)

This makes great reading. makes me want to get in the car and drive.

I had no idea Euphorbia would compete with Aster, NO! I've just planted 'Little carlow' pretty close to Euphorbia 'Purple and Gold'.

As to 'stuff' the Dordogne, stoppit, this is the heart of pre-history, still, I definitely fancy travelling 'up the Danube'.

What a great trip you've just had.

It is interesting about plants not 'liking' each other. I have a bed with some white Japanese anemone, usually a bit of a thug in the rest of the garden (and gardens around the estate) but it has died out. I had already been wondering what else is in the bed to cause this, I really can't think of any other reason.

I enjoy your posts, thank you. Sylvia

Gardener in the Distance said...

I love the photos of Christian Kress's 'Sarastro' - has much been written about it/him?