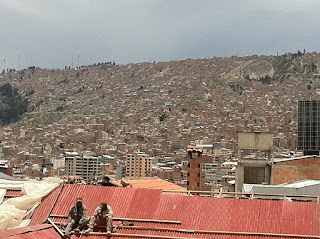 No gardening this post, but instead our impressions of traveling in Bolivia.
Which we are truly enjoying. Traveling between places is difficult, as the geography is so extreme, but once somewhere, truly a place to sit back and enjoy - one of the most colourful, idiosyncratic and interesting places we have ever been. With Evo Morales as radical president, there is the feeling of a cultural renaissance.
First impressions are not always good.....

We (Jo and I) get our only sight, and that only a very brief glimpse, of the Andes, as we land at La Paz. Visiting in the rainy season means that the scenery remains concealed. The view is dominated by El Alto, which is actually where most people in the LP conurbation live – one of those vast third world sprawls. It's no slum, nor favela, but a proper settlement (1m+) although very spontaneous in character. Like most third world cities, at ground level it looks like a version of hell, if hell is somewhere where no-one has any visual sense. Depressing, especially for a confirmed believer in progress, that so many traditional poor people's housing looks attractive, but the reinforced concrete and brick look of modern poverty not only looks awful, but seems the same the world over. Except that El Alto actually does look worse – the reason being that 90% of the buildings look unfinished. As we discover, unfinished buildings seem to be the curse of Boliva.

The drive down into La Paz is spectacular, but alarming. The core of the city lies some 500m below El Alto's 4000m, and is like many Spanish colonial cities, a mix of old and new. The backdrop though is of the newer city, a growth of (mostly unfinished) brick which spreads up, right up to the lip of the valley. Blink and you might imagine that this is a Middle Eastern, or African, city of mud brick. Every surface is covered apart from a few slopes with the inevitable eucalyptus (more in a blog about that later) and every now and again the most extraordinary patch of badlands where building is impossible. It is as if a mad USAID programme had distributed chunks of some spectacular area of south-west USA national park around the city, so that the inhabitants can marvel at the wonders of geology from the windows of their unfinished houses. 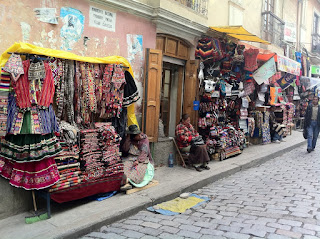 La Paz has its inevitable travellers area, a barrio of security to which one can retreat. The similarity with similar places in India and Nepal is so close, shop after shop selling a similar range of clothes, artworks, textiles, jewellery, toys, souvenirs, anything remotely 'artisanal'. Most of it is actually very good, and it is also incredibly colourful. Bolivian sensibilities rate bright as beautiful and bright pink as most beautiful of all, so another similarity with India. But, again as with India, I just wonder at the economics of all this; so many practically identical shops selling almost identical stuff; ok, it is the low season, and customers are actually quite thin on the ground, but even if the streets were heaving with gringo travellers, I find it hard to believe everyone can make a living. As for the sheer boredom of running one of these shops, it must be torture. Especially since it is not in the Bolivian way to do what happens in Rajasthan and charge out and grab every potential customer. After a couple of days we discover that various entrances are in fact entrances to courtyards (mostly of old colonial buildings) each one of which is home to another 4 or 5 shop – it is like a nightmare of mall-madness, where every way you go leads to further retail outlets, all identical. 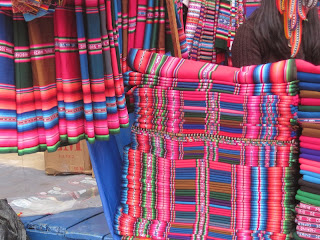 La Paz is clean, and feels very safe – in the manner of Spanish-speaking countries, there is a bewildering array of police (apart from Buenos Aires, where the murder rate has just gone up dramatically – draw your own conclusions, lovers of law-and-order and job-creation-policing). Apparently, as part of an anti-corruption drive, they are not allowed to patrol separately. Consequently, they hang around in gangs, chatting, ignoring their surroundings. Then there are the zebra-patrols, who I suspect from their theatrical behaviour are not police, but perhaps students or school leavers, but you cannot get any idea, because all you see are zebra suits, with only a glimpse of a face poking out of the open mouth. They hang around in a gang around major road crossings, to ensure safe crossing of pedestrians, with much gesticulating and waving of black and white flags.
The zebra patrols are an example of the kind of low cost imaginative attitude to transport issues in which South American countries are global innovators.

The buses of LP are another example. I would guess that 80% of all vehicles on the road are buses of some kind: micro buses, mini buses and nano buses. The system is clearly official (each one has a route number), but I suspect that private enterprise provides everything else. Each one has its destinations on pieces of card stuck to the inside of the windscreen, sometimes to the extent of seriously inhibiting driver visibility, and an assistant (usually someone who should be at school) shouting the destinations from the side door. It is an incredibly dense network ('fine-textured' to use the language of ecology) and appears to do a very good job. It is a squash inside, but cheap – you pay the driver as you exit. I haven't looked, but I bet there is an app for the system.

In terms of public services – La Paz must be the best place we have ever seen for the frequency of public toilets. 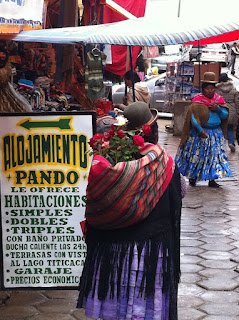 An odd mix of the developed and developing world, which I suppose, is increasingly typical World-class museums on streets with third-world holes and disintegrating pavements. Suited executives brushing shoulders with peasants. A country whose 'informal economy' (street traders) hides a large part of its GDP. The figure you inevitably focus on is the chola women – indigenous or mestizo women who wear that extraordinary dress: short brightly-coloured, and often satin-look multi-layer skirts, woolly tights (whatever the weather) fringed shawls and hats – with about half wearing the bowler hat which the London gent stopped wearing decades ago. As we discover in one of the city's excellent museums, this is the look which elite women adopted in the 1920s. For some reason it was taken up by country women, so that today it a core part of the culture. Another part of the costume is the multi-colour square of fabric on the back, which may contain a baby, shopping and merchandise, a gas canister, or in one case, a potted rose bush. Many of these women sit all day on the street, with a small patch of items for sale in front of them, a baby (usually a grandchild we reckon, and sometimes in a cardboard box) and something else to keep them busy (knitting, crocheting, or parcelling up more merchandise). It is the bowler hat which looks so incongruous, especially as it appears to be perched on top of the head. It often features a needle and thread tucked into the hat band, sometimes along with a small knife or other useful tool. When it rains, the bowler is protected with a black plastic bag.

They look jolly, but the Chola women are even more reserved than most Bolivians, to the point of being impassive. Travelling, there are often situations, where the exotic foreigner buying something ordinary or somehow engaging with people outside the standard tourist interaction sparks an interest, or amusement. Not here. It is all absolutely deadpan. In this way, it is the total opposite of India – not once have we been accosted by anything like India's “hello, what country you coming from, what is your good name, how much money you earn”. Jo is frustrated by not even being able to get the babies to smile.
Thanks to Jo for some of the pictures.

Posted by Noel Kingsbury at 3:25 PM

I'm sitting in an airport waiting for a connecting flight to my daughter's city where we'll celebrate Christmas. I read this piece out of boredom (sorry) but your writing so very vividly describes the kind of traveling I love that for a brief moment I considered changing my ticket to La Paz. Merry Christmas.

Hi Noel, I am sitting here, looking for interesting garden related articles and found your blog post about Bolivia. I'm now diverted and very jealous. 10 years ago, my wife did a 3 week tour of Bolivia, Chile and Peru and keeps trying to get me to book it up again. I looks like another world. I might give in! Scott

Again, your comments on La Paz vs. India are so spot-on. We just came back from a trip to Rajasthan and your few meanings describe the experience perfectly. All the best and may many new adventures come with the new year!