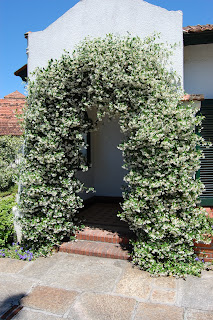 Trachelospermum jasminoides is one of the classic Argentinian/Uruguayan plants, it clearly flourishes here, but then its east Asian home has a similar climate to the area around the Rio de la Plata - hot and sticky summers. After a while though you get a bit fed up with seeing it again and again and again. The range of plants in nurseries here is very limited - the subject coming up again and again. Agapanthus are the kind of ur-plant for landscaping - I teased local colleagues by asking them to list all the varieties available - five I think was the highest; the RHS Plant Finder (UK) lists an incredible 566! 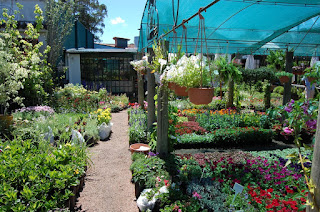 There are a lot of little neighbourhood nurseries, of the kind which we have sadly lost in the UK. Many of them are very good, but again, the same old familiar faces. I met one enterprising nurseryman (Vivero Pilar, outside Buenos Aires, AR) who had imported some plants from the USA and from Brazil, to propagate. Given how there is something of a gardening boom here, this situation must surely change.

The climate here is a good one for growing - if you choose the right plants that is! Hot humid summers with plentiful rain, and cool summers, just touching freezing - so it is a very long growing season.

The trouble is that a lot of the plants that nurseries sell aren't really suited to the climate -the plant selection is based on what might work in Spain or Italy. Maybe this is part of the Argentine condition, to be ever looking over the seas to Europe. (Let's not take this too far, I am a European on a lecture tour!). Lavenders for example rot in the humidity, lasting about two years. In some ways there is a real similarity with the hot humid summers of the American Midwest, with a similar problem with fungal etc, diseases. However what grows well, grows very well. There are so many plants that would thrive here. One group which everyone says does well, and which offer so much, are Salvia, any of the Mexican species for example, and Argentina has several natives. There is the well-known S.guarantica, and one which I had never seen before S. procurrens, which runs by means of stems rooting in, like a strawberry. 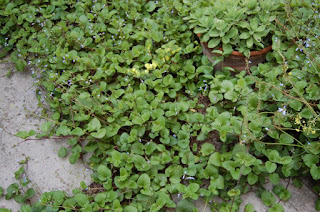 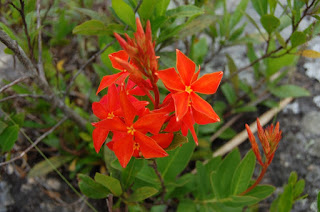 There are so many fantastic plants in the wild here, just waiting to be developed commercially. Amalia and I found a striking scarlet perennial, which obviously ran underground amongst rocks on her uncle's property, just south of the Brazilian border. We had no idea what it was, but the leaves looked strangely familiar. I broke one in half and out came white sap, so my intuition said "Apocynaceae". Later on we checked online, and ID'd it as Mandevillea coccinea. In the conservatory at home we have a 20 year old Mandevillea splendens in the conservatory, so no wonder the leaves looked so familiar. 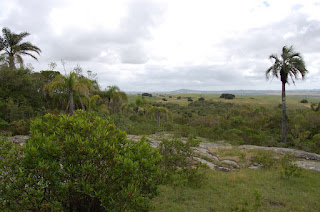 Amalia's uncle, Martin Braun, is preserving this fascinating habitat, a rocky island of biodiversity in a vast plain where everything is given over to grassland for feeding cattle. Cattle are now (I read somewhere) the dominant biomass on the planet. They are very inefficient converters of plant protein to meat. A big reason why I don't eat them! 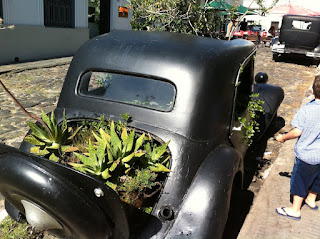 Colonia del Sacramento is a rather pretty little place in Uruguay, with an interesting line in planting up and otherwise making artistic use of elderly cars. 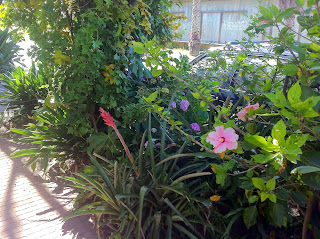 What North Americans call the 'hellstrip' between pavement/sidewalk and road. Someone has planted up what really does thrive here, a selection of mostly tropicals, very densely, so every space taken. There is a tree as well, planted up with epiphytes. The only time i have seen this done before is in Singapore, by local government. At a rough guess there were twenty species here, in about six metres , but there could be more. 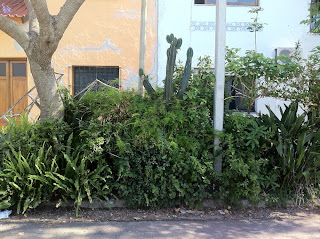 A cactus pokes up from amongst the rest of the greenery. Some cacti grow as part of many well-watered forest habitats, and cope with summer humidity better than we might think. 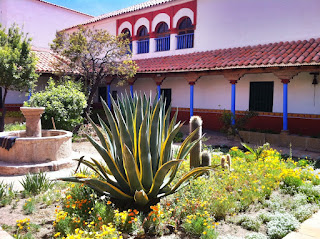 This is actually from later on, when we got to Bolivia, the convent of Santa Teresa, in Potosí, Bolivia. A garden at 4000m.

Read more about my trip to South America below and on Gardening gone Wild.

Episode six of Dig, Plant and Bitch, the soap opera for gardeners is now out.
Posted by Noel Kingsbury at 3:35 AM

I was surprised to read that they are following Italian and Spanish trends when they have such an amazing native flora but then I suppose we are guilty of doing the same. A fascinating post

What a wonderful concept planting those hell strips with such fantastic plants.
I love that car with a planted boot. If it was on an automobile blog it would get hundreds of hits!

Those are such pretty plants! I love the one in the car.

Never been to Uruguay and for me the place is nice. I love that garden. Thanks!