Back Home and Clearing Up, and thoughts on crimes against perennial growing. 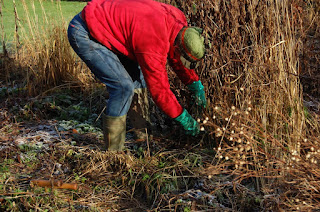 Back home from two months away in South America, and there is a lot to do the garden, although our one-day-a-week gardener, Diana had got a lot done. Cutting back primarily. Usually I cut back most of the messier herbaceous stuff in November, leaving grasses and a few of the stronger structural elements. 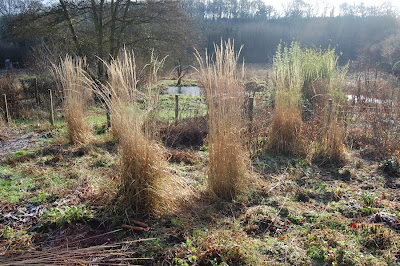 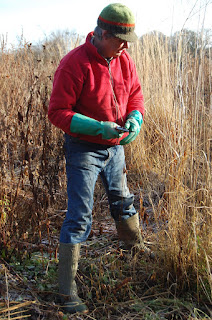 Until late January or Feb. But this year, I thought I'd get rid of the lot in one go. On this border, dead stuff ends up on the compost heap - on others I am inclined to cut it all down with a brushcutter and leave to rot down in situ. Some folk go over it all with a mower on a mulch setting, but mine won't do that, so it just stays as a rather heavy mulch. This border, we do not rake up what we don't carry to the compost heap. It just has to sit there looking untidy until spring growth begins to hide it. I do appreciate how nice and neat a newly cleaned up late winter border can look, but quite honestly life is too short.
Last week I was in the Savill Garden near Windsor. Their big herbaceous border was enough to convince me that I don't really want a nice tidied-up border after all. Horrendous! A vast swathe of bare earth with occasional perennial clumps (about one a metre in places - so many gaps!). Apparently they cut the grasses down in November - what a crime! Everything I can't stand about traditional perennial gardening all on show in one go.
To summarise: crimes against perennial growing:
1) all composed of enormous groups of the same thing
2) all cut back at once, nothing left for Santa or anybody else visiting in winter to look at
3) huge areas of bare ground
4) so I am told.....all dug up and divided every four years, no matter what the natural lifespan of the plant is.
Right got that off my chest! But the S Garden is magnif for its witch-hazels and (later) rhodies and other spring-flowering shrubs. One of their problems I suspect is too much money - or maybe the Queen likes it so tidy (it is hers I suppose after all). A problem which can wreck gardens through over-maintenance, and there was plenty of that on display here. 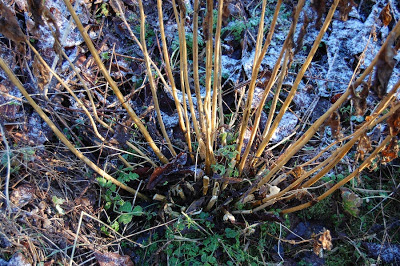 One of the insights of cutting-back is to see perennial growth at ground level - the Rabbit's Eye View I am always on about. Phlox are interesting - some break up their clumps really quickly; traditionally they are the kind of perennial which benefited from dividing every four years; not this one though - see how tight its basal growth is after six years in the same spot. A very strong-grower, given us by a (posher than us) neighbour soon after we moved "have some phlox, frightfully vulgar pink". It is pink, it is vulgar, but oh so much better here than any other phlox we have tried. More research needed I think. 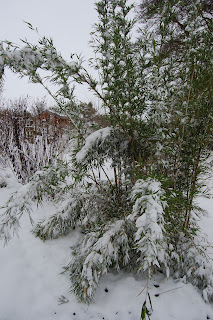 The garden here at Montpelier Cottage is more or less 'an evergreen free zone' - out of a desire to fit into the local landscape. Bamboos are the exception though, their wispy habit does not visually obtrude in the way that blocky shaped glossy-leaved evergreen shrubs do.  This is Chusquea culeou 'Weeping Form'. 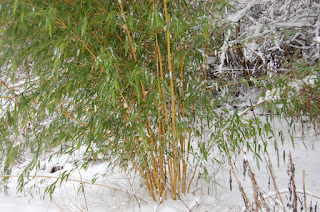 Phyllostachys aureo-sulcata 'Lama Temple' looks so fresh in the snow. It has proved much hardier than some too.

Time to flag up some dates for your diary:
I shall be in North Carolina in early March - dates see the column on the left.

I shall be doing this for RHS Wisley on Feb.26, just before I leave for the US. 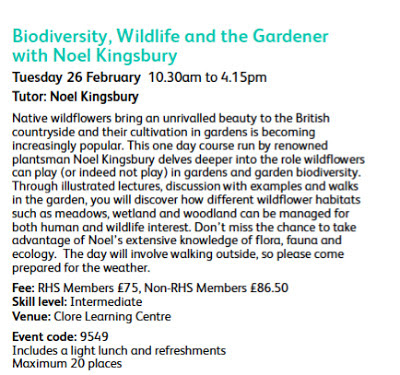 In July I shall be running a planting design workshop with Piet Oudolf at Hummelo (July 3), followed by a tour of gardens and landscapes in the northern Netherlands for Gardens Illustrated magazine, based on Groningen. Get in touch with me if you are interested in either of these.

Well there are none of those crimes taking place in my Perthshire garden either. Mine is a winter oasis for all of the hibernating insects.

Noel one plant that has really impressed me this winter with it's amber coloured upright stems is Lysimachia ephemerum.

I've never understood the need of some people to keep their gardens so (boringly) tidy. It's a garden, after all, not a room in your house! Also, I can't really imagine someone would find bare earth more appealing to dormant plants.

Loved the little rant and whole-heartedly agreed with all of it. I am trying to set a good example against these "traditional" practices at my family's place in suburban Michigan and our wintery front yard full of massive clumps of ornamental grasses is certainly more eye-catching than what any of the neighbors have to show.

Hope you had a nice holiday in South America . It looks like you have been very busy since your return
Thanks for sharing

Reading your posting today reminds me of all the work I did in October to get the gardens here ready for Winter. Lots of work, but I would rather do it in late FAll so I can enjoy each and every spring sprout! And sit back a little to enjoy the lake views. Glad to visit you postings.

Hi Noel
In Australia, Melbourne's Royal Botanic Gardens, over winter, they leave all the flower heads on and they turn a copper colour. They look fabulous. Of course if I did it at home it would look terrible and messy. I think it works for them because it is a long sweep whereas my gardens is about as big as a match box. But it did give me a different perspective on gardening.
Cheers Sandi

I am very often angry when I look at gardens. Now I know it's normal!