Two hikes in the foothills of the Andes... 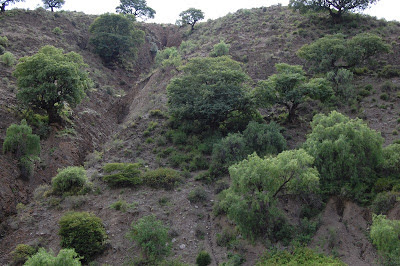 Two very different walking experiences in the foothills of the Andes; the first was beautiful but badly eroded scenery with only a little plantlife hanging on, the second was a tantalising glimpse into a botanical paradise.
Week before last we managed a hike in the hills around Sucre, in central Bolivia. Pretty catastrophically deforested (as is much of the whole central region of the country), but botanically interesting as always. Some surviving trees on very steep slopes, but otherwise pretty much like this. 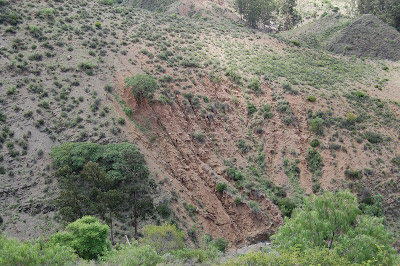 An erosion gully, a bad sign that the whole landscape is being eaten up. I would imagine the Spanish cleared the trees for silver smelting, as we are not so far from Potosí whose silver did so much to change the world economy in the 17 & 18th centuries, as well as swallow up to (it is estimated) several million human lives. 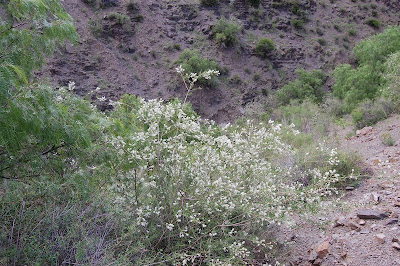 Drought-tolerant scrub mostly survives. I think this is a white ceanothus species. 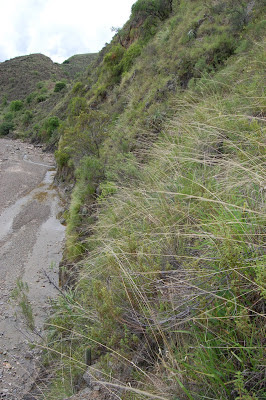 What always intrigues me in places like this are cliffs, which act as 'refugia' for native species; not even the goats can get at them, and invasive aliens tend to be held at bay too. Here grasses, bromeliads, cacti, various bulbs, begonias and much else forms a rich plant community. 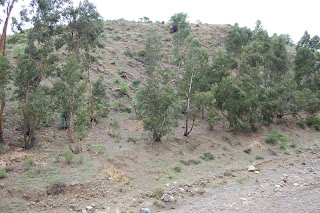 Compared to the opposite bank of the river, with eucalyptus but otherwise grazed to almost bare ground. Eucaluptus is a boon for the locals, as it provides such good firewood and so helps protect surviving native species. We saw a man planking up cut eucalyptus with a chainsaw, which is normal practice here - a real precision job!
I wish I could have got the Adiantum fern and the cactus in the same shot but not quite; they were actually growing a few metres from each other with identical aspect. Which does rather challenge ideas about 'what grows where'. In fact, I think there is plentiful water on this cliffs when it rains. The fern is a 'stress avoider' going dormant in the dry season, while the cactus is truly 'stress tolerant' as it can sits out the drought. 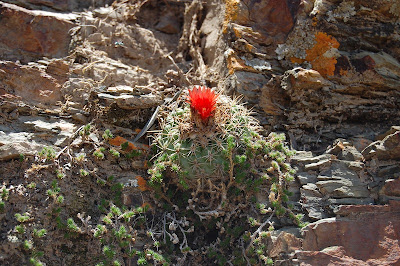 Air plants - Tillandsia species are the great survivors. Here growing on a shaded rockface.
They are very common on electricity cables. Here in downtown Sucre. 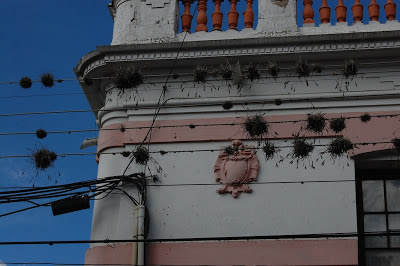 Verbena species have popped up all over the places we have been to. 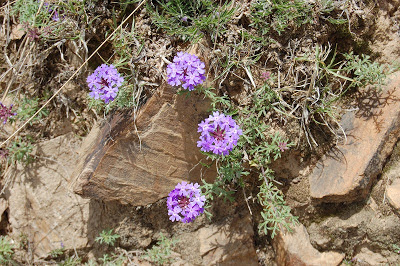 No idea what this is, but a wonderful example of evolution in action, a seemingly self-supporting shrub but with tendrils on the ends of its leaves, ready to start climbing. 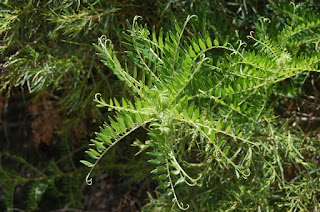 Our second hike (at around 2600m) was in Salta province, Argentina, with Veronica Saguier and her family. Veronica is a local garden designer who is also a keen trekker. There is a great deal of surviving undamaged forest in the area and many other habitats. Because of the interplay between altitude and aspect it is possible to have extreme habitat changes over relatively short distances. A bit like California, where you can drive from semi-desert to mistily-dripping redwood groves within half an hour. Cloud forest (see a previous blog) covers all land at a certain altitude. 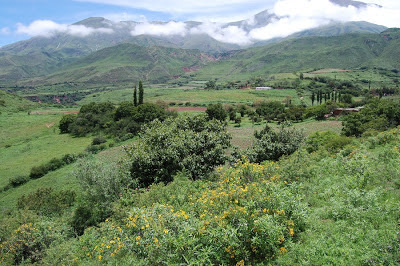 Where we started our walk it had an oddly familiar feeling... could easily have been somewhere in Europe - a gently farmed landscape. Hedgerows around where we parked, with several salvia species, a penstemon and much to my surprise a geranium (I didn't realize there were any in South America). As soon as we got going we very subtly shifted into a somewhat drier zone and so we never got to see more of the flora of the place where we parked (and our car was at the bottom). It remains as a tantalising memory to make me come back. 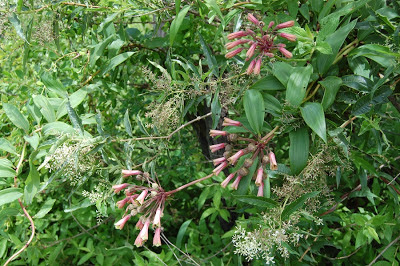 Thrilling to see a Bomarea species, climbing relatives of Alstroemeria. 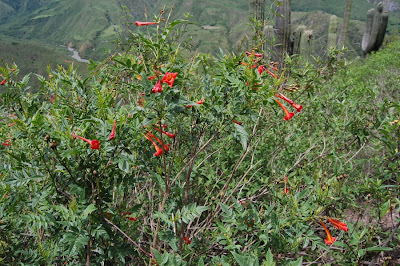 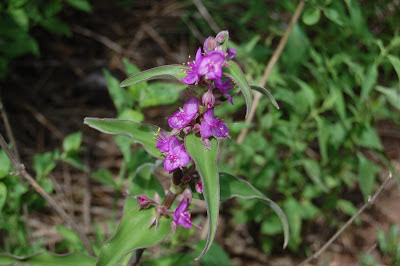 If not a Tradescania, then very closely related, and with definite garden potential. 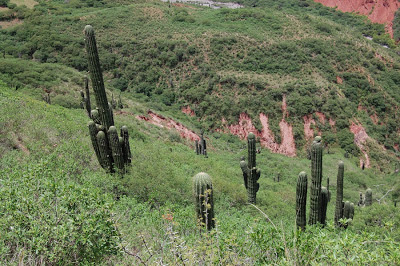 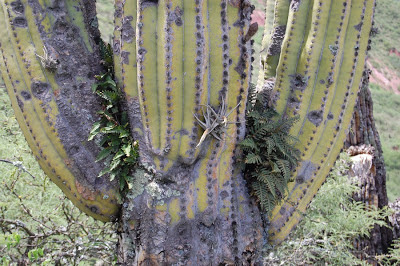 Giant cacti (known locally as Cardones) are a feature of the landscape, otherwise dominated by a rich array of drought-tolerant-looking shrubs. The cacti can be home to a remarkable number of epiphytes: ferns as well as air-plants. 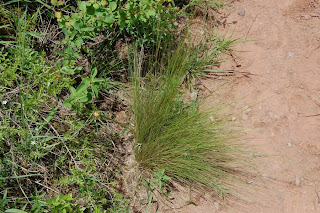 A familiar friend, Stipa tenuissima (correctly now Nassella) growing by the side of the path. 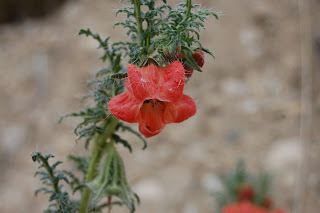 A Loasa species, attractive annuals which were grown in Victorian times as ornamental annuals, even though they have nasty stinging hairs. 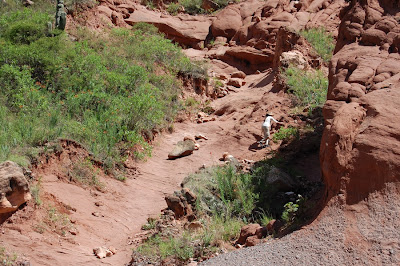 Down by the river we come across the bottom of what was obvious from further up - that whole slabs of rock and its accompanying vegetation are slipping down off the mountainside. This particular remnant is probably all going to disappear in the next few years. It contained no less than three rather spectacular bulbous species, including a very tall orange Alstroemeria and heavily scented white lily family species. The little figure on the right here is Veronica scrambling up the slope. 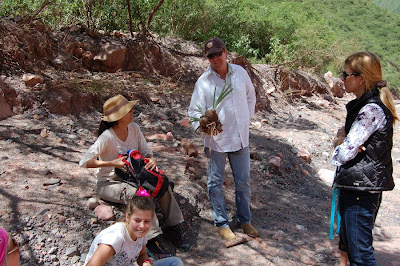 Some of the bulbs were actually hanging out of the eroding face of the soil, so Veronica's husband Julio rescued some.
This is somewhere I am dying to get back to. There are very fine distinctions between very different climate zones, so several very different floras seem to sit within a few hundred metres A lot would be hardy for mild temperate climates like ours, many other species could be usefully drought and stress tolerant. I very much hope to come back and work with local garden people in a few years and so some serious plant hunting.

Posted by Noel Kingsbury at 2:00 PM

I'm very envious of you as I have a real fondness for S.American plants.

Have you tried growing Bomarea? B.hirtella is very easy from seed (takes about a year to the first blooms) and most importantly here in the UK is suited to pot culture.

The Tradescantia certainly looks garden worthy! Are you familiar with its relative Commelina? Easily grown from seed as an annual and sets seed readily too.