Sado-naturalism? A hard look at the Japanese garden - Part Two 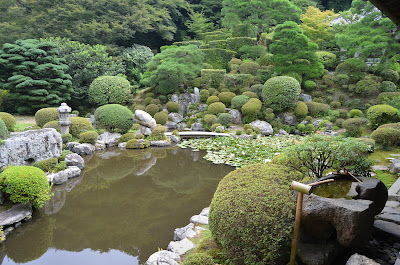 Clipped bushes, classic little bobbles.... we'd disparagingly call meatballs if they were lined up in front of a burger outlet in North Carolina. Does the fact that they were in a historic monastery garden in Kyoto make them any different? A bobble is a bobble is a bobble, isn't it? Here of course I could appreciate their being parts of a whole , but still felt each one was an example of something I personally do not care for.

The Abbot's private garden at Kiyomizu Temple (above) was an opportunity to see a small garden, like many designed to be viewed from a building, with a backdrop which cut it off from the city. A lantern on the hillside opposite was an excellent example of shakei – borrowed landscape. The garden itself was centred on a pool, a classic example of a miniaturised landscape, with a bridge which you had to imagine yourself using, rather than ever using in actuality. Stones and clipped bushes (mostly azaleas, I think) made up the composition. Everything was harmoniously balanced.

Tree clipping is also something here which evokes mixed reactions. There are those people who get very emotional about how much they hate bonsai (I have heard of bonsai enthusiasts being thrown out of nurseries). I am not one of those; indeed I rather like bonsai, although I would never bother with them myself. They are however only one end of a whole spectrum of tree management in Japan. A great many trees in private gardens and public spaces are clipped; much of the work of gardeners is concerned with tree management - Niwaki as it is called. In a crowded environment, in a culture where seeing the macrocosm in the microcosm is important, I can see that this is a very useful skill. In the case of pines in particular I think it lengthens the useful lifespan of the tree, and the results can be very pleasing. Sometimes though, in larger spaces, it just seems so unnecessary, a tradition applied too readily. 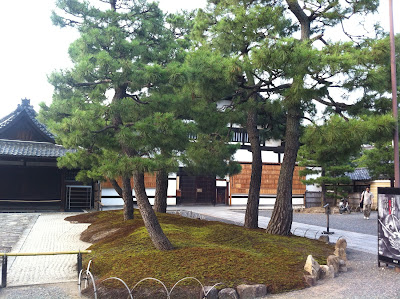 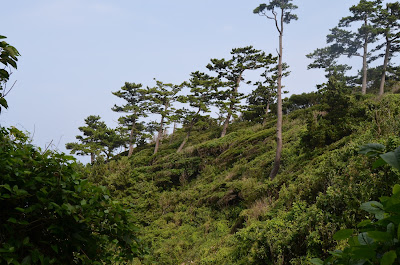 Where tree clipping passes from useful skill to absurdity is in where trees are trained to resemble the windswept trees of the coast (as at Jogasaki above), which are seen to exemplify a virtuous tenacity, as much as being beautiful in their own right. Clipping and training can be so extreme that permanent and highly obtrusive bamboo structures are needed to support branches to extended that they can no longer support themselves. Which seems to me to be an absurdity, as the trees no longer resemble anything natural. An example of the means overcoming the end. And a reminder that bondage and sado-masochism is an important part of the pornography industry here (see Ian Buruma's excellent book on popular Japanese culture A Japanese Mirror).


A conservative tradition of heavy-handed pruning, a contrived idea of what nature is, and an over-reliance on clichéd stock forms? All of these criticisms could be levelled at the European tradition of classical formality; indeed I have often done so. And here too, perhaps even more so.
But the basic design principles, techniques and philosophy can inspire continued development.

Here was one which was occupying a few square metres of a wedding venue in Kyoto. Very nice use of a few perennials (rarely seen here in traditional gardens). 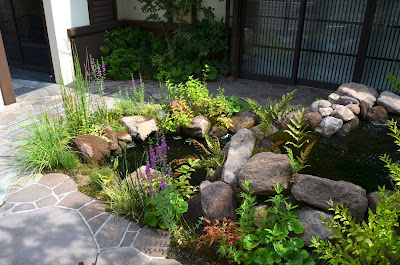 And here is a garden on a very steep slope at Jogasaki, only five years old, a reminder of how a hot humid summer makes things grow. Made by a lady potter who scatters her various creations around the garden. A wonderful naturalistic creation with a dense ground flora, mostly native. And - its open too, the idea of public open gardens is beginning to take off in Japan. Private and contemporary gardens - that's what I'd like to do next time I come. 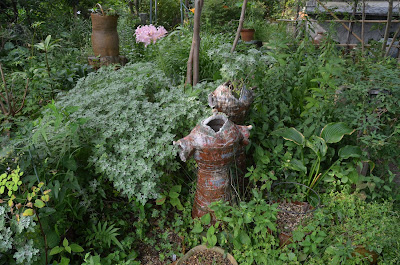 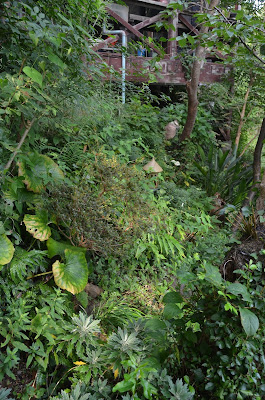 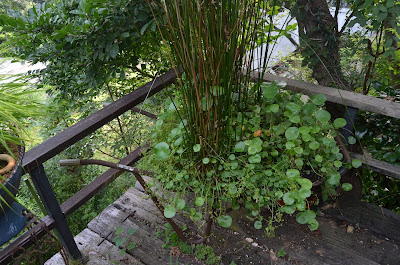 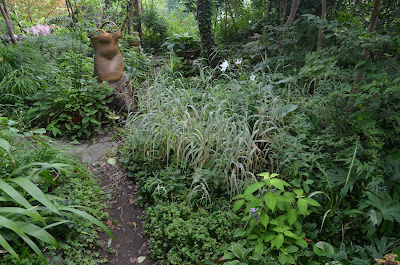 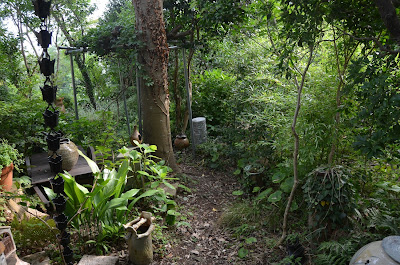 I like Japanese gardens. Even with sadistic pines.
They tend to contemplate.

I like Japanese gardens. Even with sadistic pines.
They tend to contemplate.

Japanese Gardens are the epitome of order and serenity... but of course, it takes a lot of effort and time before you can perfect the bush/tree trimming. Nice post...

The supporting of the Pines are mostly temporary. Supporting a tree for the winter time with snowfall, or for training purposes for a period (can be years). In other cases it is to preserve a tree of certain value, historical or religious. The Japanese way of looking at nature is very different than a western approach and sometimes "too much".

Like you, I have had an interest in Japanese gardens since teenager-hood. However, even then I remember being nauseated by all the topiary.