August is a messy month 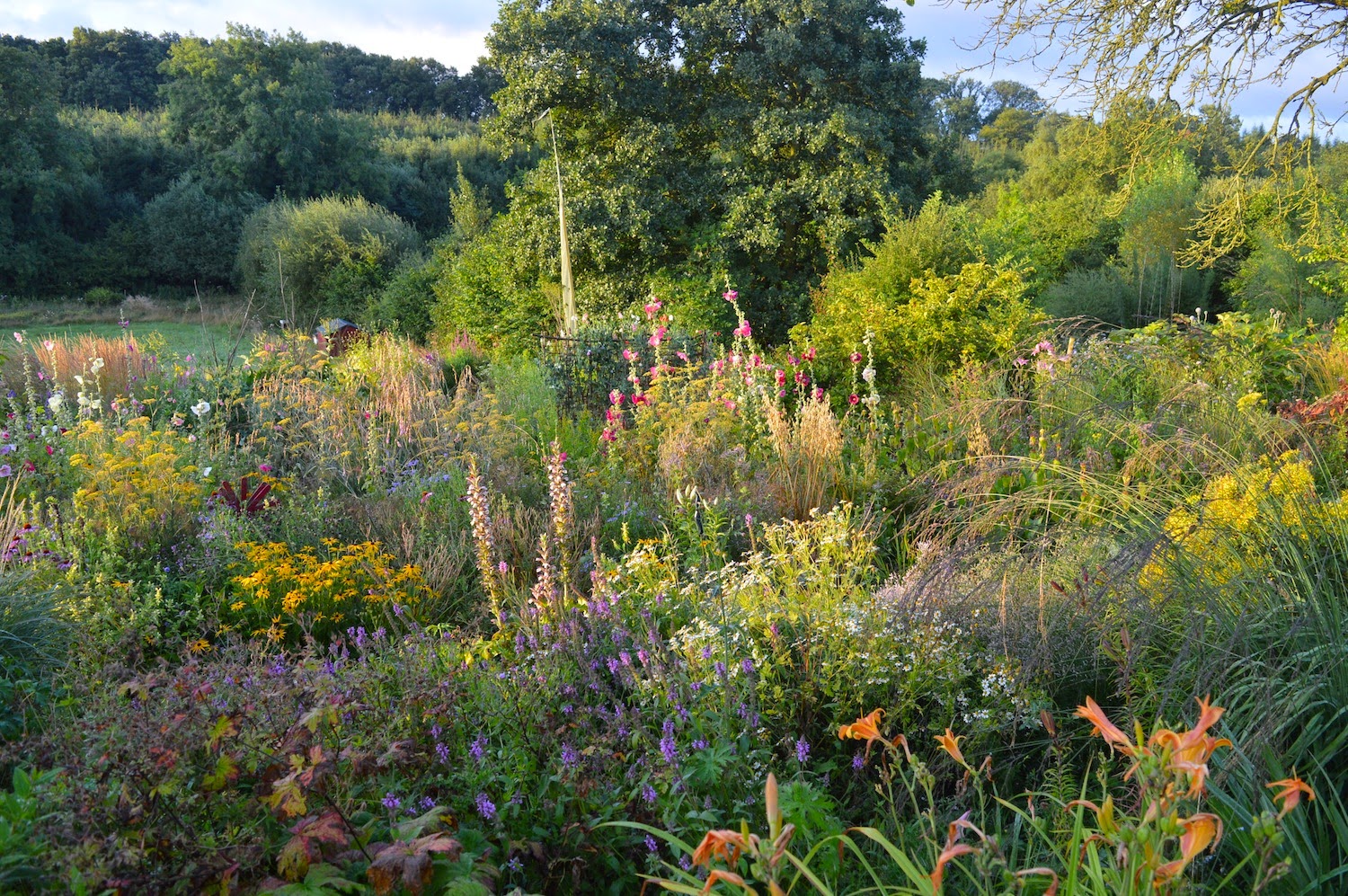 The view above is from our bedroom window, earlier in August. Much the same now except the day lilies have gone over. It seems to be characteristic of a lot of things which flower now to keep on flowering for ages, but often tending to look increasingly raggedy. August is traditionally rather a dull month in British gardens, after the early summer rush of (most European origin) perennials and before the (mainly North American) daisy family and butterfly-attended led flurry of autumn. Hollyhocks are invaluable for colour and Rudbeckia fulgida varieties too, for lower-level colour. But there is no getting away from the fact that this is a month when a lot of perennial growth looks very messy. 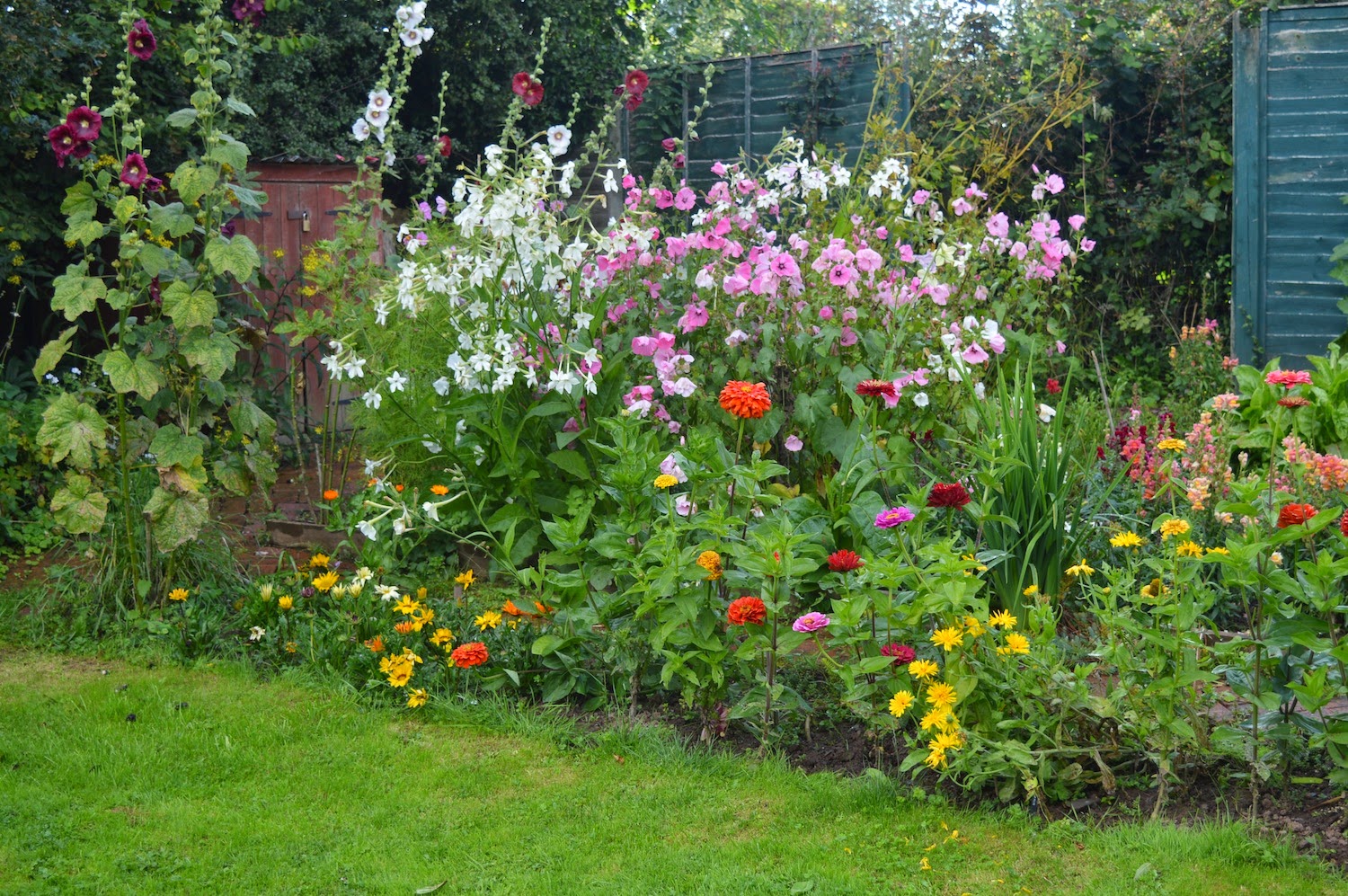 The traditional response has been to rely on annuals, and Jo's lavatera, nicotiana and zinnias have done very well. 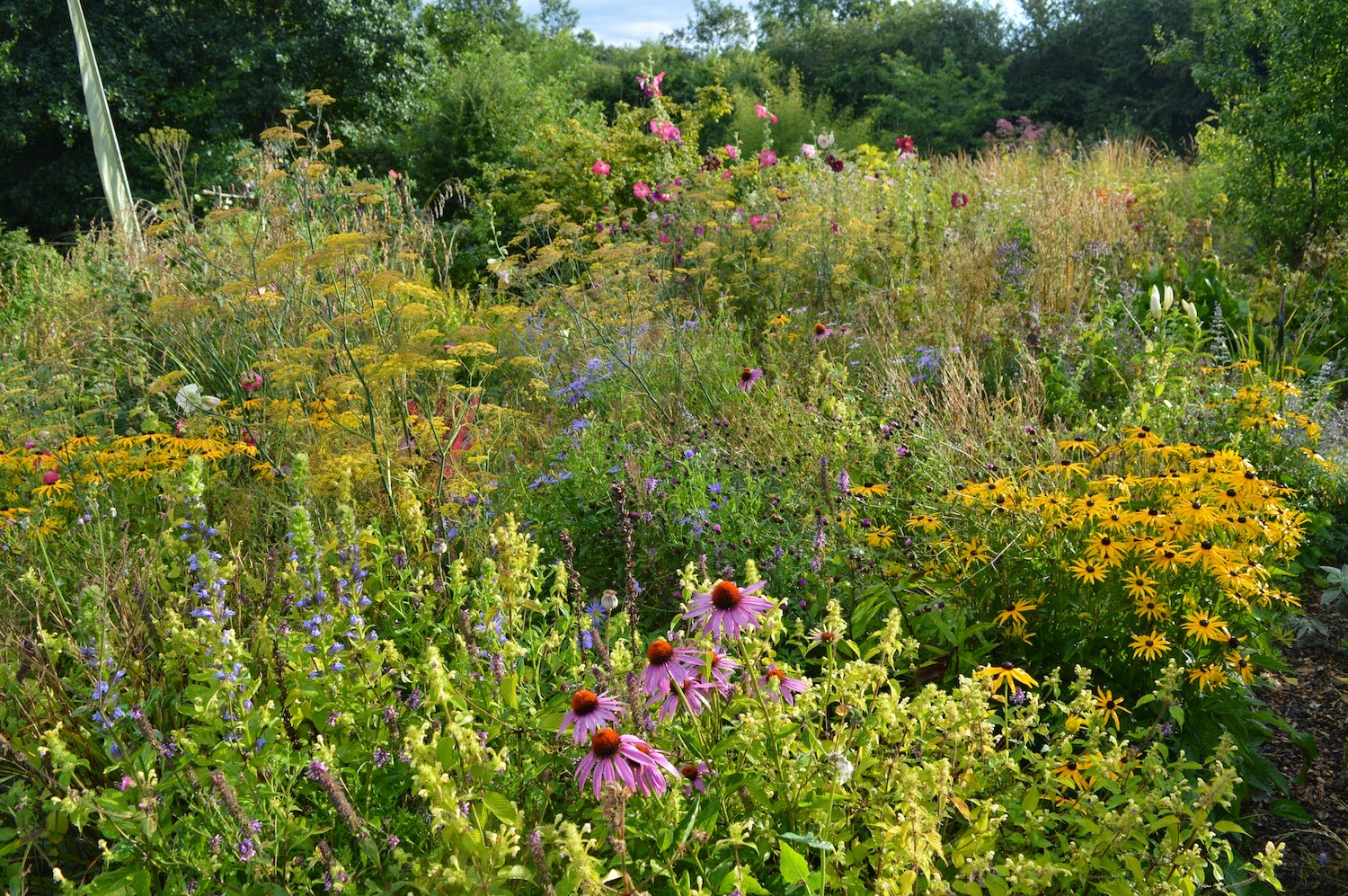 Echinaceas are increasingly popular for this time of year, but have a reputation for being short-lived, which is quite a difficult one to unpack, I'll have a piece coming out in the Telegraph soon on that; a lot of conflicting opinions on this. I have three left out of ten put in three years ago. They add definition to an increasingly fuzzy plantscape. I'll grow some from seed next year. 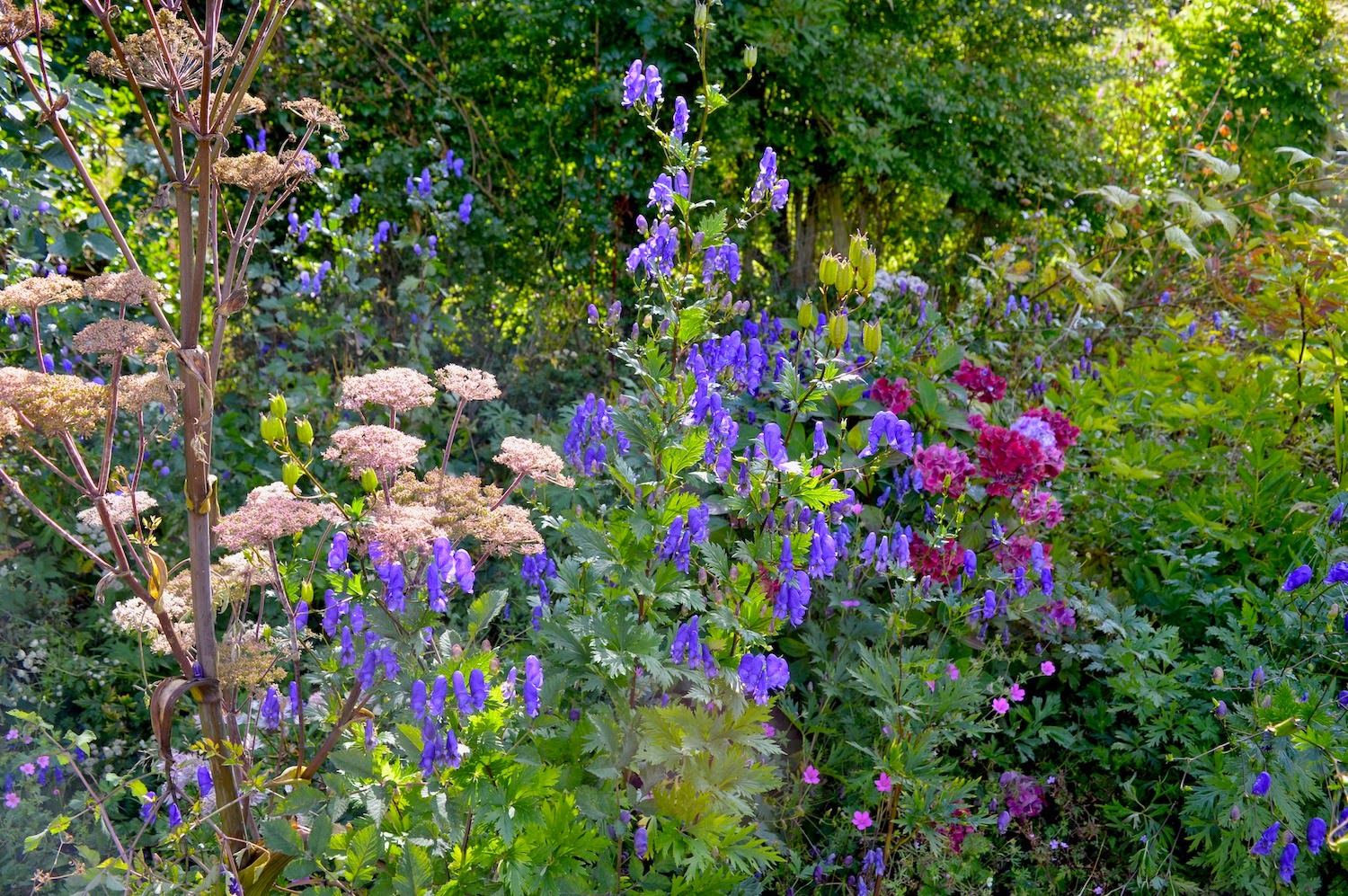 A very successful part of the garden is where the only hydrangea we have managed to grow (Preziosa) darkens as it fades (you know what I mean!) alongside Aconitum variegatum and our wild Angelica sylvestris, a locally native biennial which is a very nice umbellifer to let loose in the garden although I do wonder at what point I will get fed up with it, so perhaps I'll dead-head some to stop them seeding. The understorey here is Barnhaven primulas which flower in spring and alpine strawberries. 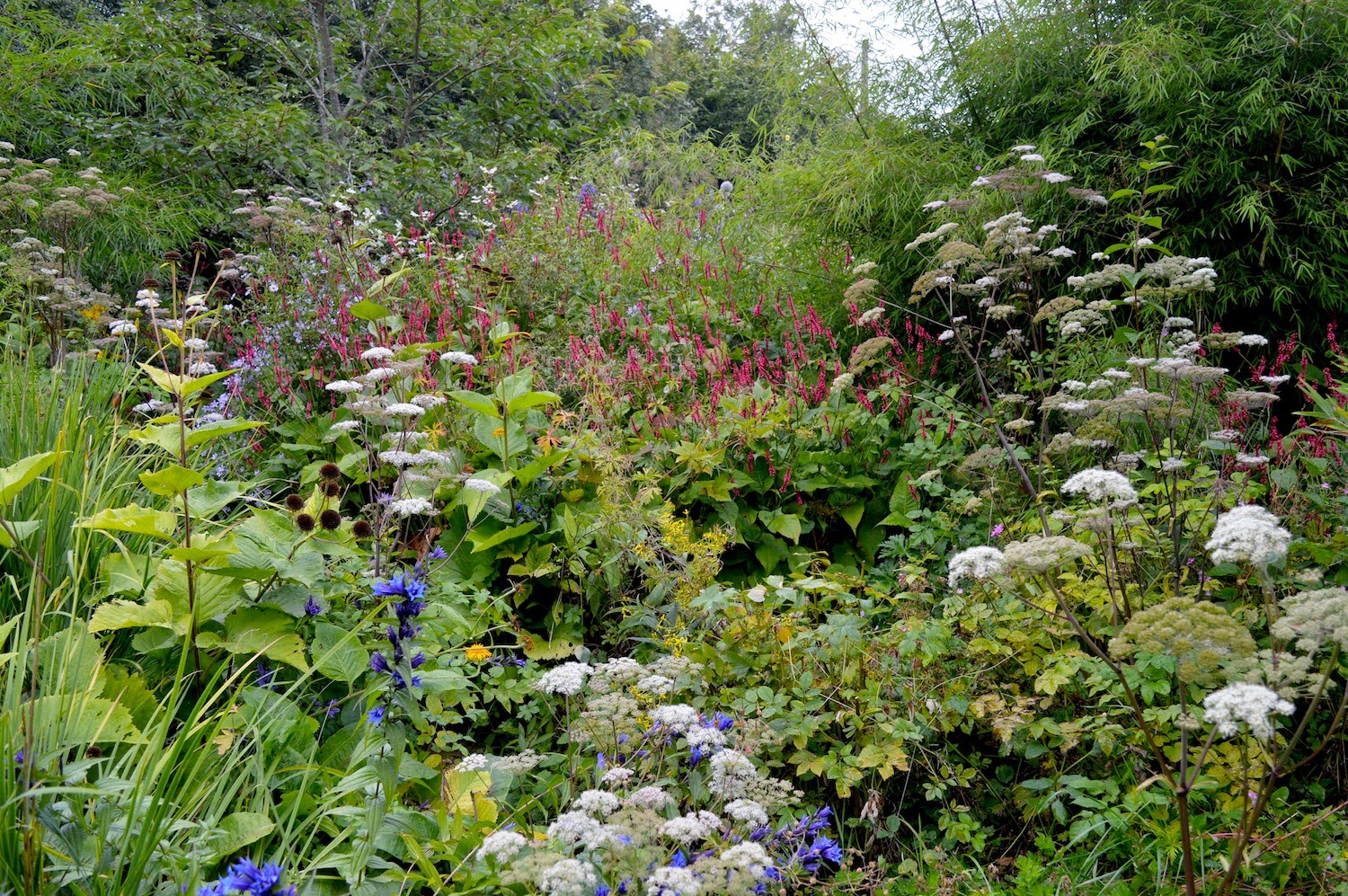 Here it is in the Wild Garden where the stalwart Persicaria amplexicaulis has already been flowering for a month or more and will probably carry on doing so for another month. This is the part of the garden where lush and luxuriant growth has the feel of the untidy, almost chaotic, growth that is so characteristic of tall-herb habitats - crazy wildflower habitats we only rarely see as they tend to be inaccessible mountain areas. 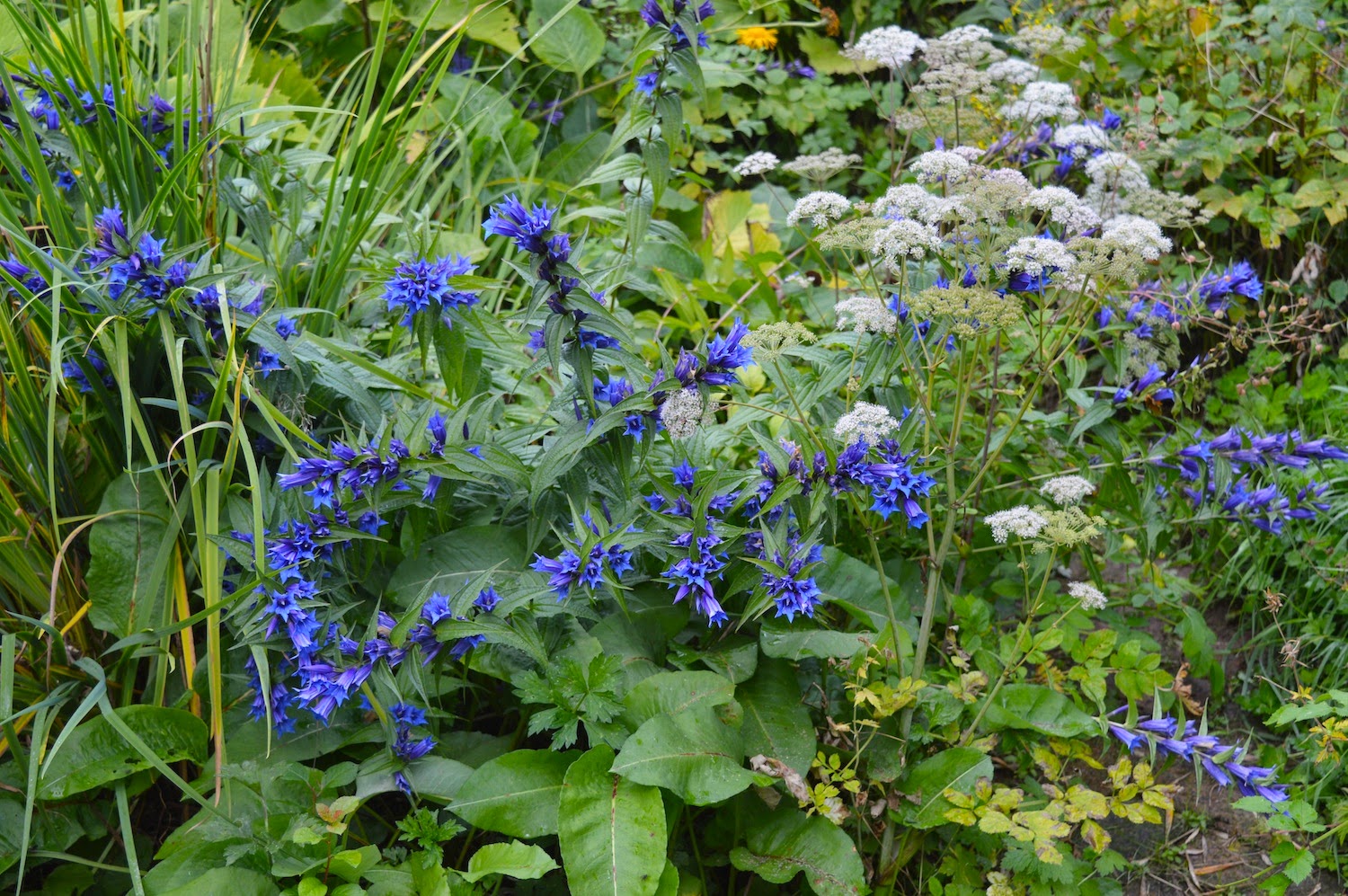 Gentiana ascelpiadea, known as the 'willow gentian' (heaven knows why!) is a great success here. They have a reputation for doing well on heavy soils, but they take several years to establish, and need careful protection from weeds and slugs during this time. There is also a high failure rate, so best grown from seed - expect to lose most. Once established (3 years on) they are very long lived and steadily get bigger and more spectacular. They make good cut flowers too with nice long stems. T 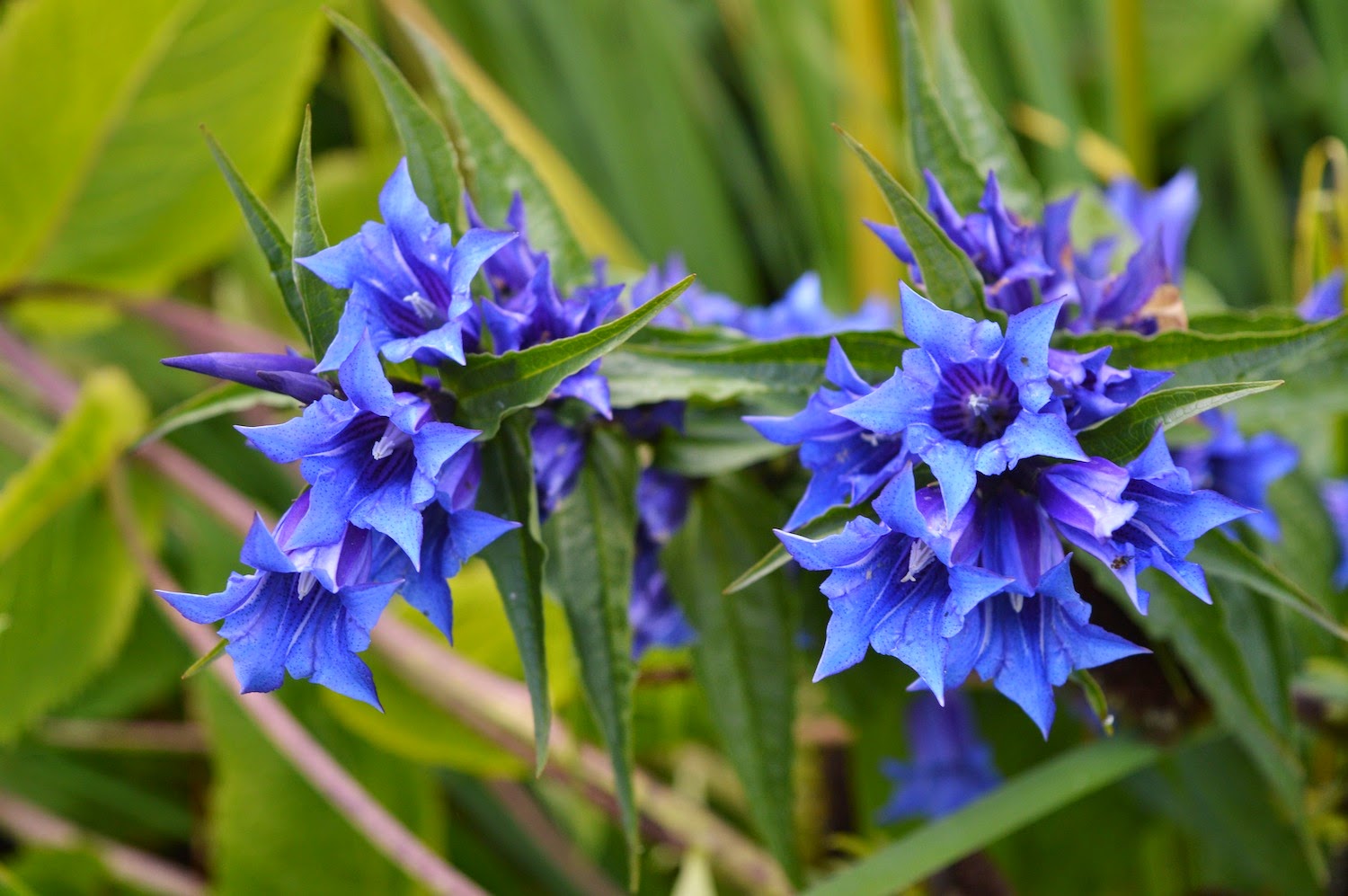 There is a lot of variation in seed-grown plants. This is the best blue so i have saved seed and am now growing lots more. I have fantasies of having them scattered all over the garden. 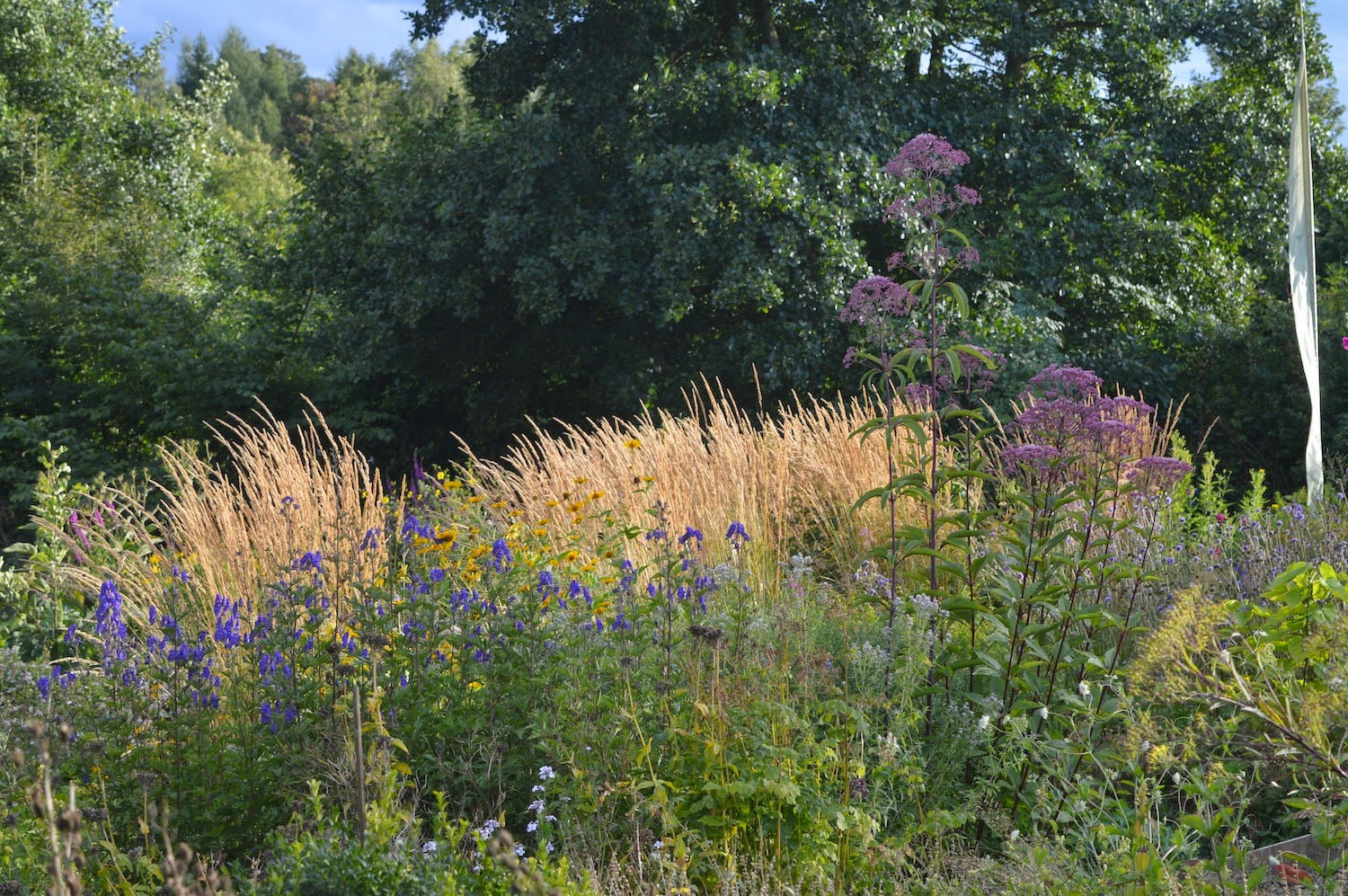 The incredibly good Calamagrostis 'Karl Foerster' as a backdrop to Aconitum arctuatum and a very tall North Carolina collection of Eupatorium fistulosum. 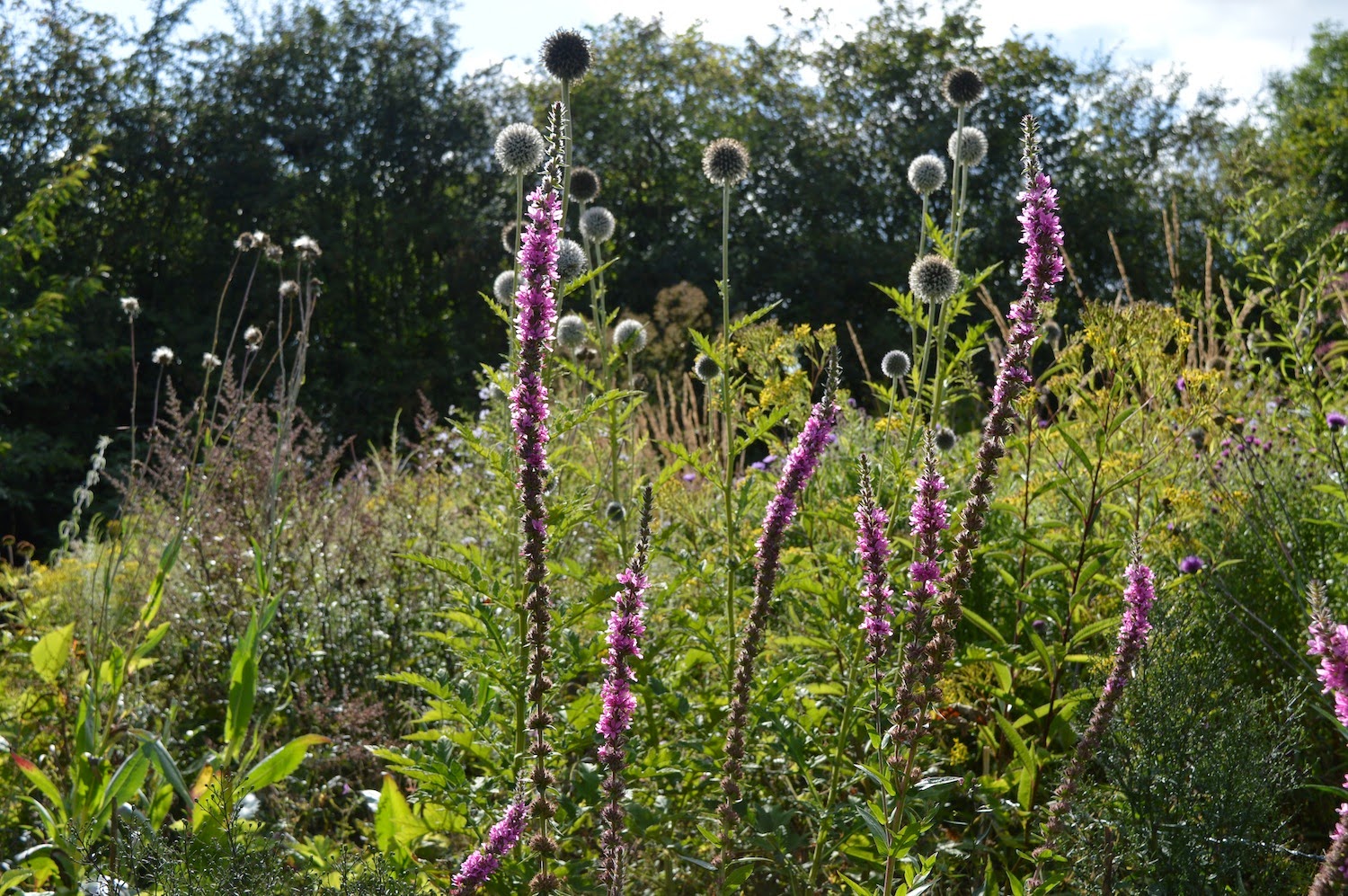 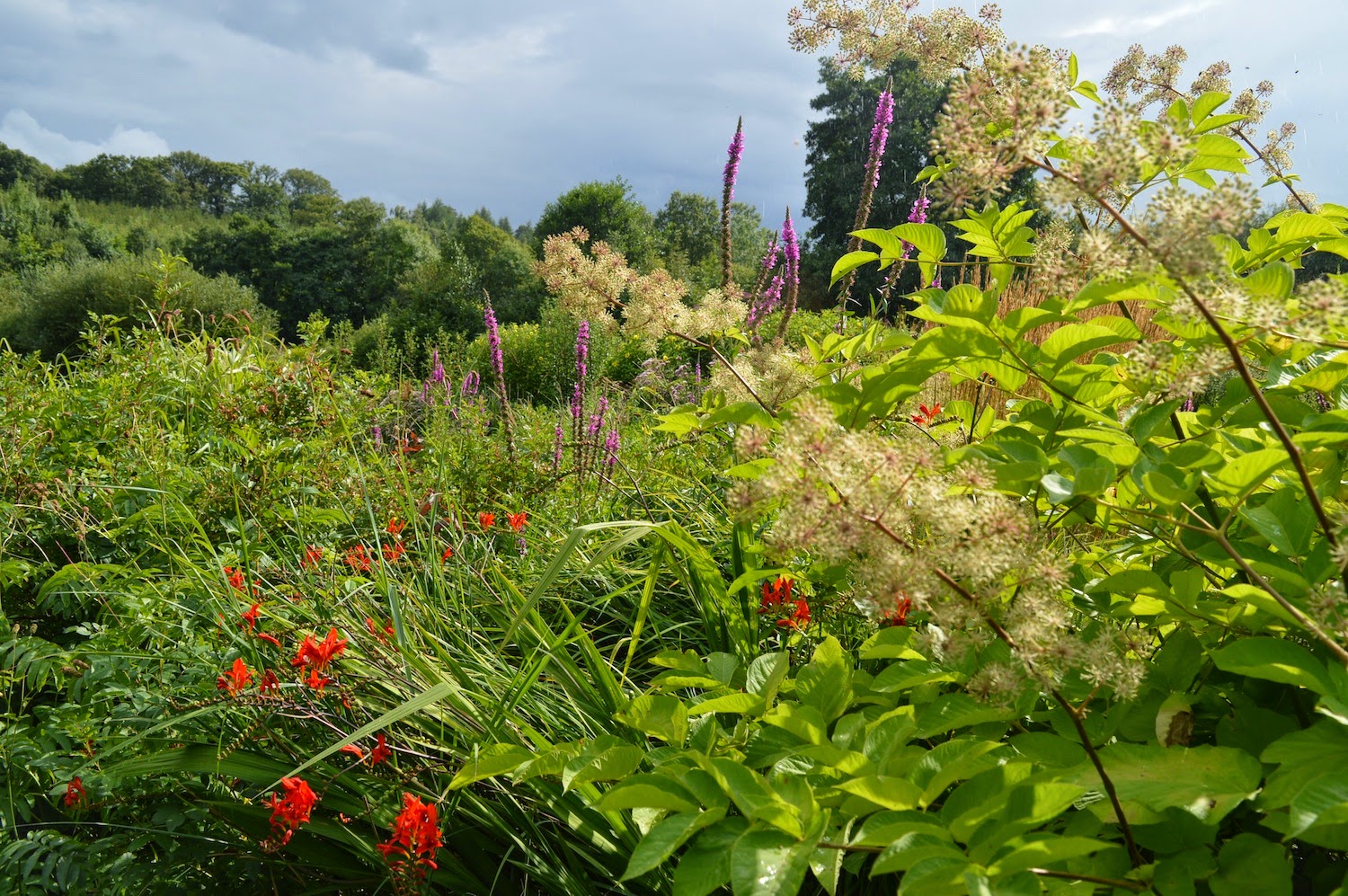 Heads of Echnops 'Taplow Giant' and Lythrum salicaria make good silhouettes in the increasingly low sunshine. This year's big success is Aralia cordata (right) which has taken off amazingly this year, from a slug-beset start. Trouble is, its rather in the wrong place and I'm not sure about transplanting it. The flowers are a terrific resource for pollinators of every kind imaginable.

I find myself wondering about expectations a lot.

It's true that August is characteristically messy (though epliobiums continue to light it up....!). Each month has a characteristic 'feel'.

Question is - do we indulge that feel? Heighten it? Or attempt to deny it or change it? Just as a hoar frost heightens the characteristics of a January garden, you might think messiness heightens the late summer, August garden.

So do we edit it,challenge it or leave it to do it's special thing?

Great post Noel and yes indeed Anne - the August mess is a special thing. I find that this time of year the slightly ragged feel reminds me most of the wild habitats we take inspiration from. It adds yet another layer of complexity to the aesthetics and my emotional understanding of them. Kind of a half on, half off type of confusion to unpick and come to terms with.

I'm now lusting after Gentiana. I don't know if it will survive here, but some species seem to have a chance. I'lll keep an eye out for them.

And Noel, if you tire of the "mess" in August, come to Kansas, where it's all dry and dead.

Yeah, It is messy, but it was a beautiful messy! Flowers are still incredibly beautiful.

It is indeed messy here as well. I wonder if the the Echinacea want more heat or do not like the extra moisture of northern European summers, because here in the Eastern US they return quite faithfully and also tend to multiply by seeding all over the place. Only some of the new red and double varieties have not been as vigorous for me.

"Increasingly fuzzy" sums up August/ early September very succinctly! I look at my own garden with increasing despair - yours still looks jaunty and youthful to me !

What an absolutely wonderful garden! I love all the beautiful flowers you have got! Best regards from Anne-Kristin in Norway