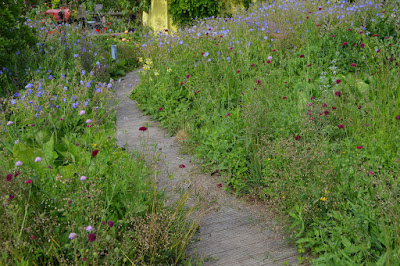 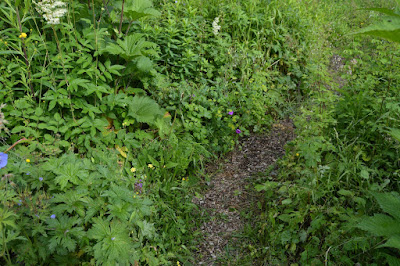 I'll end with a shot of a new planting which is an experiment in co-existence and matrix planting using 50% Carex muskingumensis; it's stiff and upright and helps form a solid mass that holds up weaker plants like the dark-leaved Lysimachia 'Firecracker' here. The light green shows off other plants well too.
If you want to find out more about perennials and how to use them in the garden, why not sign up for my course Planting Design with Perennials on MyGardenSchool. Use Code: NOEL20 for a 20% discount
Posted by Noel Kingsbury at 11:40 PM

Yes - this is also an annual issue at this time of year in my wild-style garden over the hill from you in the Black Mountains (www.nantybedd.com). Each year I vow to do better. I have been cutting back, with hand shears (satisfying when done but very time-consuming), path-side vegetation so like your idea of using a small battery-powered strimmer - will investigate. This year I did provide support for the Campanula lactifolia with coppiced birch - very sculptural and worked fine for a while but now the campanula is taller than the support so will probably snap in the wind and rain we are currently experiencing - or I resort to the dreaded link-stakes. Veronicastrum always flops but that's fine as long as it's not across paths.Primula florindae is happy here too - smells lovely and happily self-seeds. I have lots of ferns which arrive and put themselves where they want to be - so some of those get a Chelsea-chop to ensure some of them produce fresh foliage throughout the summer - otherwise it all gets to look a bit overgrown, unkempt and tired. So my conclusions I think are similar to yours - avoid staking and organise the planting so that the plants can support each other - not rocket science, is it? So why am I always disappointed and frustrated when it all flops at this time of year?

I agree, that enough uprights to hold it all together visually and structurally and then others with the highly flexible habits of the geraniums, and then mixing with the shorter plants for the edging.I love using white lilies, blue geranium, iris foliage, acid-green euphorbia, thistle-like eryngium and lavender in a border at this time of year.