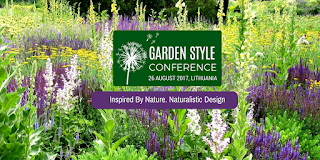 I've been travelling to eastern Europe since 1993 when Jo got a job in Bratislava, Slovakia. I love the area, for all sorts of reasons, and am particularly fascinated by how societies emerge from a long period of cultural, political and economic repression. I've just come back from a trip where I was lecturing and teaching in Latvia and Lithuania, two of the 'Baltic Republics'. Latvia was fantastic but what I experienced in Lithuania was extraordinary.

“I needed something for the backyard” Lina Liubertaitė recalls. “People here know how to garden, but not how to make it look nice, to design”. And so began one of the most impressive experiments in garden promotion I have come across. Lithuania is a small country in northern Europe, long colonised by Russia under the guise of the communist Soviet Union, and only independent since 1991. Like all ex-Soviet countries, growing vegetables and fruit (with a few flowers on the side) was second nature. It had to be because the shops were often empty. Now there is a new world, of higher living standards, a consumer culture and many entrepreneurial possibilities.

“All the information available was so old-fashioned” Lina says. With a background in marketing, Lina saw the possibilities for promoting gardening, and started writing magazine articles and crucially, began to get local experts to run courses. At the beginning it was hard, a young woman in a rather conservative culture faced criticism as a newcomer, and not a professional or trained horticulturalists. Eventually she has triumphed, with her company and brand - GeltonasKarutis – Yellow Wheelbarrow.

Last week I was one of the speakers at Garden Style, an annual conference Lina has organised for three years now. There were 500 people there, “about half the population” joked a Polish friend (the popn. is actually 2.7million), an incredible number in a small country; a third were professionally involved in gardening or design. Lina gave her conference clout by inviting overseas speakers from year one: Carrie Preston from Holland in year one. The great thing about Yellow Wheelbarrow is that it is a 'one stop shop' for gardening – if you want to know about gardening in Lithuania go to the website.
Lina asked me to do some teaching, as her big thing is education. I ended up teaching three day workshops back to back, with twenty people each day. For the first two days I was interpreted by Rasa Laurinavičiene, a very innovative local gardener whose garden in a village just outside the capital, Vilnius, is packed full of perennials. We used the facilities of Vilnius University Botanical Garden, which is an excellent teaching garden with a wide range of plants. As a garden though, it still feels like it does not yet belong in the modern world, Soviet style public gardening - with but in the best possible way, with enough labour to continue to maintain enormous beds of perennials, and mostly very well-labelled.
As always with east European audiences the thirst for information was almost palpable and there is that wonderful sense that you are really helping something develop. There were plenty of landscape architects in both the Latvia and Lithuania groups, a good sign that quality planting is part and parcel of larger projects here. Indeed in both countries perennial combinations perennial plantings are beginning to emerge in public spaces. Places to watch indeed.
Posted by Noel Kingsbury at 12:37 PM

It would e nice to think that UK gardening blogs such as your own are devoured for new information.
Having said that I expect we could learn from their own gardening culture

Thank you Noel for your visit, and for this blog post. I feel like I'm doing what I have to do, and what people are willing to experience (I mean the conference). It's so interesting to see everything from your point of view! Thank's for sharing your thoughts, I feel so many exciting things are going to come into this region!

I urge You to come to Estonia too! ;)