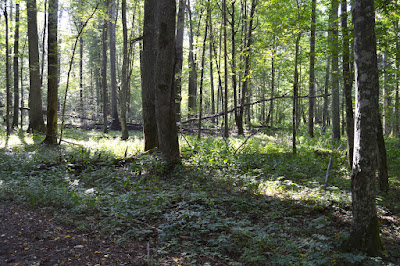 The Białowieza Forest in eastern Poland is somewhere I have always wanted to go – the only genuinely virgin, untouched lowland forest in Europe. Last week I finally got to go there, thanks to friend and colleague Małgosia Kiedrzynska who organised the trip. The scale of the place is immense and to us, used only to 'forest' being small areas of woodland, overwhelming. At 1,400 square kilometres it is almost the size of London. The border between Poland and Belarus goes more or less down the middle.

At the moment the forest has a somewhat higher 'recognition factor' than normal, owing to the proposals by the Polish Ministry of the Environment to allow tree felling in supposedly protected areas. See the Guardian article here. <https://www.theguardian.com/world/2017/jul/31/poland-continue-logging-biaowieza-forest-despite-eu-court-ban> 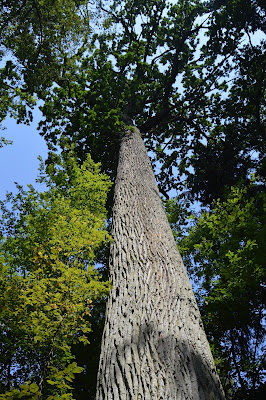 What is intriguing for the British visitor is to see familiar species we all share as natives, both trees and perennial ground flora, growing in very different ways. Everything on one level is totally familiar and on another level very different. Take the trees for a start. There is oak, although it is nothing like as dominant as it would be at home. Oak at home branches low down, even when fairly densely planted, but here the trunks soar upwards, dead straight for 15m, maybe even 20m, and then branch out rather sparsely; they look more like something out a tropical rain forest than anything I'm familiar with. And alder, great dense stands of them, dead straight and soaring upwards, at least half as much again in height with what we are familiar with from British riverbanks. 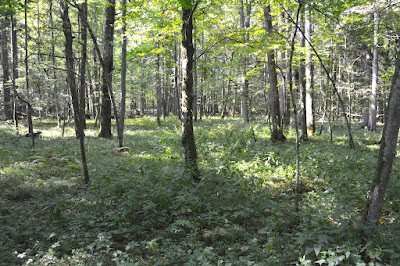 There is (on the Polish side) a protected core area, which you can only enter with a guide. It is surprisingly light, with a high canopy, a mix of hornbeam, lime (Tilia cordata), ash, maple (Acer platanoides) and oak. Very few trees are actually that big, for reasons I didn't get to understand. What is intriguing is the ground layer. Lots of indicators of high fertility like ground elder and nettle, but they are sparse and mixed up with a huge range of other species. We are so used to seeing both these plants as aggressive weeds, but here it is presumably lower light levels that keep them in check and allow for greater diversity. In fact ground elder is almost universal in light shade everywhere I went on this trip (Latvia southwards) which gives you a different perspective on it compared to the “ohmygod what a terrible weed” attitude we have at home where it is not actually native. 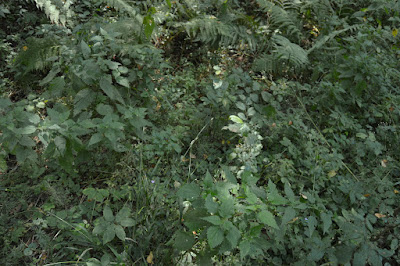 The forest is divided up into a whole series of segments on a grid, put in place by the Russians when it was an Imperial Forest in the latter part of the Romanov regime. Each grid is marked with numbers, which makes it actually very hard to get lost. Different grids are managed differently, with many being commercially managed and others under varying levels of protection. This all means that in travelling around (which we did on bikes) you get to see an enormous range of woodland types: different tree compositions, different soil-determined habitats, and different types of management. And water level, which was particularly interesting. 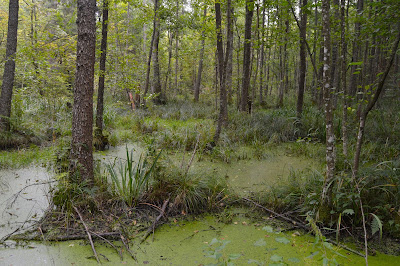 Much of lowland Britain probably had forest like this, very wet, and at times flooded. Now we have almost none. In fact we have no river floodplain forest at all, and haven't had any for centuries, only a tiny bit of alder carr (wet alder woodland) and very other little wet woodland – most was drained or drained and cleared in the 19th century. Being here and seeing these vast swampy woodlands, where it was simply too wet to risk walking across, gave me a sense of what a lot of lowland Britain must have once looked like. And then there is one area, conveniently located near our hotel, which is spruce over a peat bog, but mysteriously given the obviously acidic conditions, the sphagnum moss etc, there were some (famously nutrient-hungry) nettles. Apparently this is the most westerly example of the habitat that covers vast areas of Siberia – the taiga. 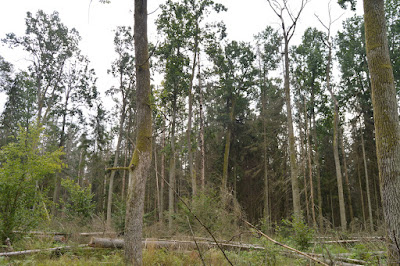 So what about the notorious tree felling which has broght Białowieza into prominence? There is a whole patchwork of old-growth forest outside the main protected zone which the environment ministry has started to extract timber from, under the guess of controlling spruce bark beetle, threatening a uniquely old habitat. Commercial factors are of course thought to be the real reason; presumably because the old-growth trees are bigger or better quality than the truly epic amount of younger material which could be felled without damage to old-growth forest. The forest does seem very poorly managed from a commercial point of view however. I noticed masses of felled timber, much of it presumably felled for safety reasons along roads, where it had clearly been left for years. I suspect the real reason for felling is political provocation, as the current Polish government is one of the few foreign admirers Donald Trump has, and which is similarly dividing families and friends.

Anyonewho wants to find out more, sign a petition etc. look here.
To see it in English tap the Union Jack in the top right hand corner.

THANK YOU, I thought that nobody cares about Bialowieza, and it is only our local problem. Fight with us to save Bialowieża.
Kasia from Poland